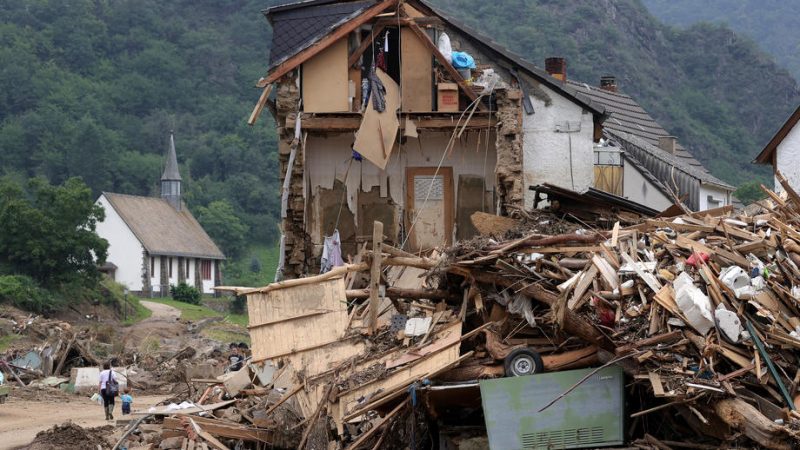 epa09353795 An collapsed houses after heavy flooding of the river Ahr, in Altenahr, Germany, 19 July 2021. Large parts of western Germany and central Europe were hit by flash floods in the night of 14 to 15 July, following days of continuous rain that destroyed buildings and swept away cars. The total number of victims in the flood disaster in western Germany rises to at least 164, with many hundreds still missing. EPA-EFE/FRIEDEMANN VOGEL

Analysis: after Germany’s climate election, UN summit delegates will be watching to see what is agreed on coal phase-out. EURACTIV’s media partner, The Guardian, reports.

It was called Germany’s climate election. After deadly floods in July sharpened the focus on the climate emergency, all parties vied for green votes. But when it comes to the UN climate talks in Glasgow in November, the path has largely been set by the outgoing government.

Germany was always expected to be represented by a caretaker government at COP26. Officials expect the current environment minister, Svenja Schulze, to attend alongside the state secretary, Jochen Flasbarth. A more open question is whether the new government will be in office by the time Germany takes over the G7 presidency in 2022.

Germany had already upgraded its greenhouse gas emissions reduction target before COP26, although this was the result of a judicial ruling rather than a diplomatic move. In May the government promised Germany would be carbon neutral by 2045, five years earlier than the EU target. That plan, which includes a target to cut emissions by 65% by 2030 compared with 1990 levels, was set after activists took the government to court arguing that the slow pace of action jeopardised young people’s freedom.

At Glasgow, Germany will share the crucial task of persuading rich countries to provide $100bn a year in climate finance to poorer countries – a longstanding goal that is still being missed, endangering the ambition to limit global heating to 1.5C. Flasbarth and his Canadian counterpart, Jonathan Wilkinson, were asked by the COP26 president, Alok Sharma, in July to come up with a plan to ensure developing countries live up to their promises. “We want to send a clear signal to developing countries that will strengthen their confidence in our commitments,” Flasbarth said last week in comments reported by Clean Energy Wire.

The complex manoeuvring to form a coalition in Berlin, however, could affect the mood in Glasgow. Delegates will be watching to see whether German parties agree to speed up Germany’s coal phase-out, with closest attention on the first-placed Social Democrats (SPD), the second-placed Christian Democrats (CDU/CSU) and the Liberal party (FDP), who along with the Greens could play a role as kingmaker in any coalition.

Current policy allows coal-burning power plants to remain open until 2038, a timetable incompatible with Germany’s upgraded climate targets. “Regardless of which parties form the next federal government, it will have to find answers to the climate crisis much more decisively,” said Martin Kaiser, the director of Greenpeace Germany.

“Neither the SPD nor the CDU/CSU or the FDP will get through coalition negotiations without changing their previous positions,” he said, citing the coal phase-out, expansion of renewables and the switch to clean transport. “With that, the new government could become a motor for climate ambition both within the EU and internationally.”

If Europe’s biggest economy signals it is ready to ditch coal much sooner, that could help talks between the 196 countries in Glasgow.

Jennifer Tollman, a senior policy adviser at the E3G thinktank in Berlin, said the caretaker government had an important role to play in “diplomatic outreach to partners” at COP26. She would like to see Germany deploy its star coalition builder: Angela Merkel. It has not been announced whether the outgoing chancellor will attend the talks, but analysts think she could play a useful role.

“Not having her there on the ground in her expert mediator, honest broker role would be a real waste,” Tollman said. “It’s about the diplomatic capacity that Chancellor Merkel holds. The fact that she can intercede with [the Chinese president] Xi Jinping or leaders of similar stature.”

This article originally appeared in The Guardian environment and is republished here with kind permission.