“Whether or not their position will change” in the aftermath of the oil market crash “will be a litmus test” for oil major’s commitment to clean technologies, said Fatih Birol, the IEA’s Executive Director.

Oil prices moved to negative territory for the first time in history last month because of collapsing demand caused by the COVID-19 crisis, Birol pointed out during a EURACTIV online debate on Monday (11 May).

“Oil markets are going through very unusual times,” he said. “But I’m very hopeful,” he added, saying leading European oil majors “will be part of the solution for a sustainable energy future.”

Shell and BP unveiled plans earlier this year to reach net-zero emissions by 2050, in line with EU long-term goals on climate change.

Among major European oil and gas firms, Shell and Eni are considered to have the most ambitious emissions-reduction plans, according to the Transition Pathways Initiative, which assesses companies’ preparedness for the transition to a low carbon economy.

“And this is in my view very good news. Because these companies have a lot of engineering experience, and deep pockets for many of them,” Birol said.

Not everyone is optimistic about the oil sector’s future perspectives, however.

Luxembourg’s energy minister Claude Turmes, who also spoke at the EURACTIV event, warned about the risk of US shale companies going bankrupt, saying the shockwaves could be felt across the global economy.

US shale-drilling pioneer Chesapeake Energy warned on Monday that it may not be able to stay in business following the dramatic fall in oil and gas prices caused by the COVID-19 outbreak.

“If American shale gas and shale oil companies go bust, it could really have an impact on the American financial sector, which could spill over to Europe,” Turmes said.

“The last thing we need in the middle of this COVID-19 crisis is a Lehman Brothers 2,” the Luxembourg energy minister warned, referring to the collapse of the US investment bank in 2008, which set off a global financial crash with devastating effects for the European economy.

With low oil demand likely to last, Turmes said he would “personally favour a carbon price floor, at least for the electricity market” in order to decrease Europe’s dependence on fossil fuels.

Birol agreed “there is definitely a risk” that some US shale companies will go bust. “If the US oil industry collapses, this would send ripples through the world economy,” he warned, reminding that oil is the world’s most widely traded commodity on global financial markets.

However, that risk had receded with the relative uptake of oil prices, Birol added, saying that global oil markets remained on “yellow alert” for the time being.

Moreover, the IEA executive director continued, Europeans should not fool themselves about oil.

“Yes, the future is electric, but we will still need oil for years to come,” Birol said, calling on governments to plan for an orderly transition.

Oil and gas companies in particular need to “take the lead to modernise their strategies and increase the share of clean energies in their investment spending plans,” Birol said.

Four European oil and gas majors – Shell, Eni, Total, and Repsol – are considered to be aligned with the 2°C emissions reductions target of the Paris Agreement, according to new research from the Transition Pathway Initiative released on Tuesday (12 May).

BP and OMV are now the only European integrated oil and gas companies who fail to align with the Paris pledges, according to TPI’s analysis.

But despite these commitments, none of the companies are yet aligned with ‘net zero’ or 1.5°C pathways, TPI said.

TPI is an investor initiative backed by over $19 trillion of global capital. 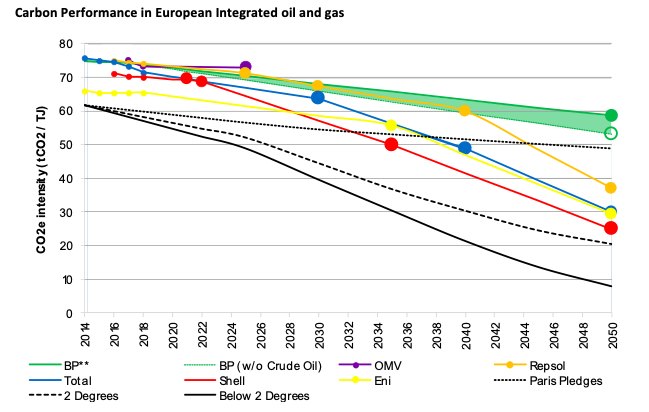