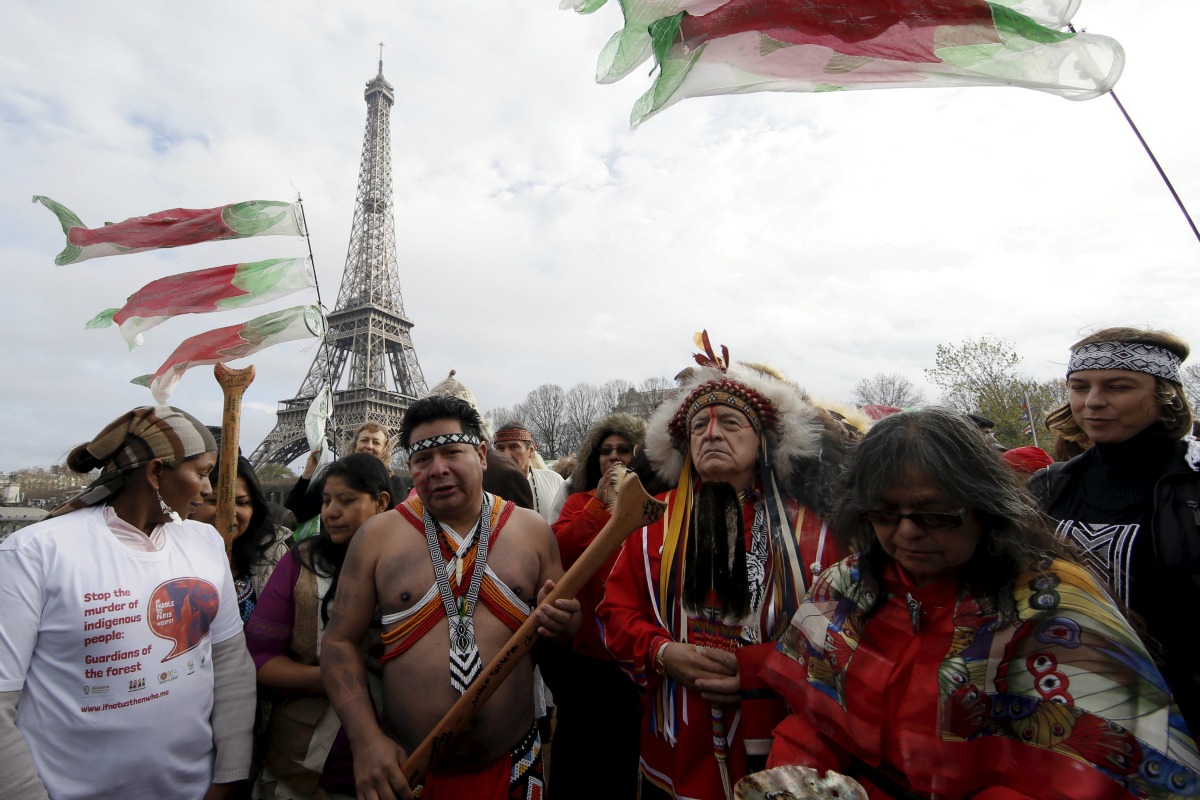 Indigenous leaders from all over the world pray as they sail on the Seine near the Eiffel Tower, during the COP21 conference. [REUTERS/Gonzalo Fuentes]

Diplomats crafting the blueprint for a worldwide climate rescue deal have tendered their 48-page offering at the half-way point of UN talks, concluding a bitter four-year haggle that seemed often to teeter on the brink of collapse. Here are the key issues to watch as the meeting enters its final week.

While the Draft Paris Agreement has been welcomed as a crucial step in the right direction, it remains littered with clashing proposals from countries at odds on how to divvy up responsibility for curbing Earth-warming greenhouse gases, and forking out the cash.

Environment ministers face a considerable task when they gather from Monday to translate the template into a 195-nation plan to preserve our planet’s hospitable climate and the future of humankind.

These are the crunch issues:

The money must ease the shift from cheap and abundant coal to renewable energy sources (“mitigation”, in climate jargon), and shore up defences (“adaptation”) against climate change impacts such as freak storms, drought and sea-level rise.

But does private money count? And loans? What about money from richer, fellow developing nations, multilateral agencies and development aid? Who qualifies for funding? How much of the money will go to mitigation, and how much to adaptation?

These are the questions still dividing developing nations and rich ones, many of which resist attempts to write any obligation or liability into the text.

The talks are taking place under the auspices of a 1992 climate treaty which enshrined the principle of “common but differentiated responsibilities and respective capabilities”.

It assumed that rich countries have polluted for longer, and bear a bigger responsibility for addressing the resulting problem ? a distinction developing nations wish to retain.

They also demand some leeway on coal use as millions of people rise out of poverty.

Wealthy countries argue much has changed in 20 years, and nations once tagged “developing” have become big polluters in their own right.

China is now the world’s number one greenhouse gas emitter, and India is number four after the United States and European Union.

How hot is too hot?

But small island states and many poor nations ? which will be hit first and hardest by the impact of climate change ? are pushing for a lower ceiling of 1.5 C.

The draft agreement lists both temperature targets as options under the caption “Purpose”. It will now be up to ministers to take the political decision which one they retain, or perhaps both.

The agreement’s very “long-term goal” is still in dispute.

Will it set a deadline for emissions to peak and a rate for their decline thereafter? Will it set a target date for reaching zero emissions? Will it call for carbon to be removed in its entirety from the energy economy? All the options are still in there.

A pillar of the Paris agreement is a list of voluntary national pledges for reducing emissions from burning coal, oil and gas.

But commitments received so far, even if fully honoured, place the world on course for warming far beyond the targeted safe level, scientists say.

Many countries want a mechanism to periodically review, and ramp up, the pledges.

But how often will assessments take place? From when? Will there be an obligation on nations to automatically improve on their earlier pledges, and how frequently?

Falling under the UN climate forum, the agreement will be considered “binding” under international law ? though there is no penalty for non-compliance, merely a loss of face.