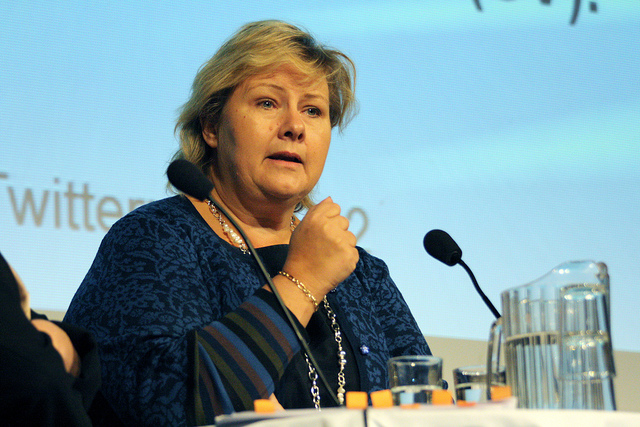 Environmental groups have called on Norway to change its economy, which is heavily based on exports of oil and gas, after the UN Climate Change Conference (COP21). But Norwegian Prime Minister Erna Solberg insists this won’t happen.

Since the 1960s, exports of oil and gas have become vital for Norway’s economy, making the Scandinavian country one of the biggest producers in the world.

But on Saturday (12 December), world governments agreed on a historic international agreement to fight global warming at the COP21 in Paris.

Almost 200 nations agreed a deal to cap global warming at “well below” two degrees above pre-industrial levels, with a reference to a lower, long-term 1.5 degree target in the text. This means that emissions from fossil fuels such as oil need to be cut dramatically.

While the Bellona Foundation, an international environmental NGO based in Oslo, said that the climate deal reached in Paris over the weekend means a ‘locked door’ for Norwegian oil after 2035, the environmental group Zero stated that Norway needs to take on particular responsibility to ensure the phase out of fossil fuels.

“One of the first things we need to do is cancel the oil drilling in the Northern areas,” said Lars Haltbrekken from the Norwegian Society for the Conservation of Nature.

Greenpease’s Truls Gulowsen added: “There’s no room for Norwegian oil or gas from the Barents Sea by 2040 in a 1.5 degree scenario.”

>>Read: COP21 celebrations, but governments must mind the emissions gap

Continuing with oil and gas

But Solberg believes that coal is the issue that needs to be tackled and that Norwegian gas can be part of the solution in bringing down emissions from Europe ahead of 2030.

“We will change some things in all parts of the Norwegian economy in order to meet the ambitious goals that we have set in the parliament. But this does not mean that there won’t be a need for both oil and gas in the coming decades,” she said.

“We will continue with oil and gas, but we will also be aiming at creating jobs in other sectors,” Norway’s prime minister added.

If Norwegian petroleum activity is shut down, it will be replaced by increased production in other countries that have higher emissions, argued Oskar Grimstad, the climate policy spokesperson of the government party, the Progress Party.

“We recommend therefore that we keep a full speed on the Norwegian oil and gas production in the future to achieve the objectives set in the Paris Agreement,” Grimstad said.

One response to “Norway gives COP21 a cold shoulder”