Obama unveils sweeping cuts to power plant emissions: ‘We have to get going’ 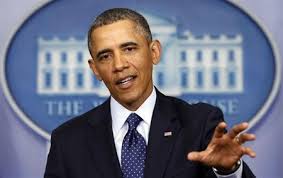 Six years after first promising to “roll back the spectre of a warming planet”, Barack Obama finally committed the US to unprecedented action against climate change on Monday (3 August), with sweeping new curbs on carbon emissions from power plants that are equivalent to taking 70% of American cars off the road.

The culmination of his long-fought battle against coal industry lobbyists and climate change sceptics in Congress was greeted with jubilation by many environmentalists who described the tougher-than-expected regulations as a “game-changer”.

Describing it as “the single most important step America has ever taken in the fight against climate change”, Obama warned it was almost too late: pointing out that 14 of the 15 warmest years on record have already fallen in the first 15 years of this century.

“Climate change is no longer about protecting the world for our children and grandchildren, it is about the reality that we are living with right now,” said Obama in a speech announcing the plan. “We are the first generation to feel the impact of climate change and the last generation that can do something about it.”

But, recalling his own experience amid the smog of 1970s Los Angeles, Obama also insisted that tackling climate change was an achievable goal – comparing it to past environmental achievements in improving air quality, and measures to tackle acid rain and polluted rivers.

“I don’t want my grandkids not to be able to swim in Hawaii or climb a mountain and see a glacier because we didn’t do something about it,” he added in an unusually personal speech on a subject that has previously proven toxic for his political strategists.

White House officials hope the timing of their binding pollution regulations – the first ever US limit on carbon pollution from power plants – will help persuade other big carbon-emitting countries to sign up to international targets at a major climate change conference in Paris this December.

“I don’t want to fool you, this is going to be hard. No single action, no single country will change the warming of the planet,” added Obama. “But today, with America leading the way, countries representing 70% of carbon emissions have announced plans to tackle emissions … We can solve this thing, but we have to get going.”

Under the Clean Power Plan, published in its final form by the US Environmental Protection Agency (EPA) on Monday, states will now be required to work with electricity producers to reduce overall carbon emissions by 32% below 2005 levels by 2030.

The target is slightly higher than the 30% cut envisaged under draft proposals last year, but states have been given an extra two years before implementation becomes mandatory and are left to decide what mix of renewable energy, gas generation or efficiency savings is the best way to achieve the target.

The 1,000 fossil fuel-fired power plants in US are by far the largest source of CO2 emissions in the country, making up 32% of total greenhouse gas emissions. Experts predict the EPA standards will force US coal production back to levels last seen in the 1970s.

Investment in renewable alternatives, such as wind, hydro and solar power, together with mandatory new carbon-capture equipment are expected to cost the electricity industry $8.4bn, although the EPA claims this will be dwarfed by $34-$54bn in wider environmental benefits.

Some campaigners stressed the carbon reduction targets, which are already partially achieved by many states, are only a start toward what is necessary to curb climate change.

“While historic, when measured against increasingly dire scientific warnings it is clear the rule is not enough to address our climate crisis,” said the Friends of the Earth president, Erich Pica. “This rule is merely a down payment on the US’s historic climate responsibility.”

Vera Pardee of the Center for Biological Diversity added: “While the plan should have been stronger and implemented reductions more quickly, it lays a solid legal foundation for further efforts to avoid global warming’s most dangerous consequences.”

Many international companies have also supported the plan. EBay, Nestlé and General Mills were among 365 businesses to sign a letter in support of the proposals and encouraging states not to delay implementation.

Nonetheless the plan is expected to run into a wall of opposition from Republican-controlled states, many of whom fear it will decimate jobs in the coal industry and drive up electricity prices for consumers.

The depth of feeling among many on the right is particularly visible in the party’s presidential primary, where few major candidates acknowledge the need for emissions controls to tackle climate change.

Jeb Bush, seen as the leading establishment contender for the Republican nomination, slammed the rule as “irresponsible and overreaching” in a statement.

“The rule runs over state governments, will throw countless people out of work, and increases everyone’s energy prices,” he said.

“Climate change will not be solved by grabbing power from states or slowly hollowing out our economy. The real challenge is how do we grow and prosper in order to foster more game-changing innovations and give us the resources we need to solve problems like this one.”

Texas senator Ted Cruz added: “The president’s lawless and radical attempt to destabilise the nation’s energy system is flatly unconstitutional and – unless it is invalidated by Congress, struck down by the courts, or rescinded by the next administration – will cause Americans’ electricity costs to skyrocket at a time when we can least afford it.”

The president first pledged to tackle climate change in his 2009 inauguration address, a commitment he reiterated four years later, but despite more modest achievements on fuel efficiency standards and renewable energy investment, a comprehensive legislation was blocked in the Senate.

Instead, his administration has sought to use pollution control legislation to circumvent political opposition with executive actions that are underpinned by supportive supreme court rulings.

On Monday, Obama said it was not a moment too soon. “This is one of those rare issues, because of its magnitude and scope, that if we don’t get it right, we may not be able to reverse. There is such a thing as being too late when it comes to climate change,” said the president.