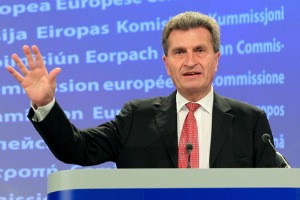 Günther Oettinger, the EU’s energy commissioner, greeted the launch of a new coalition promoting renewables and gas power with a call to set fixed emissions reductions and clean energy targets for 2030.

“I think we need a new CO2 emissions reduction target,” he told a conference in Brussels on 31 October, which marked the launch of a new alliance between companies involved in renewable energies and natural gas production.

An internal European Commission debate about a communication on targets for 2030 is due to begin in six weeks time, with mixed messages emerging from the EU executive as to its potential contents.

Jasmin Battista, a member of Oettinger’s cabinet, told a meeting in October that the commissioner would only favour a combined target for renewables and emissions reductions. But such a package would lack support from member states.

A week before, Jos Delbeke, the European Commission’s director general for climate, told a separate conference in Brussels that there would be no such climate and energy package until 2015 at the earliest.

A separate proposal for increased emissions reductions targets may also be included in the EU’s Emissions Trading System (ETS) reform proposals in November, drawn up by its climate department, as a jolt to the flat-lining carbon price.

Shell, one of the companies supporting the new gas and renewable energy alliance,  supports the removal of around 1 billion allowances from the ETS, and a carbon price floor in the ETS from 2020 onwards, both of which might help to encourage investment in carbon capture and storage (CCS) technology.

But Dick Benschop, Shell's Netherlands Gas Markets vice president, said overlapping EU targets would interfere with the EU’s policy objectives. “For us, it’s absolutely clear that the key 2030 target is for CO2,” he told EURACTIV. “That’s what is driving climate change.”

Shell has yet to formulate a precise position but Benschop indicated that the energy giant, which for the first time this year expects to produce more natural gas than oil, expects a target in a range between 30% and 40%.

“We support Commissioner Oettinger in his statement in favour of a 2030 target for renewable energy. We need this target legally binding and in our view a 45% renewable target would create long term policy-stability for the energy sector”, said Justin Wilkes, policy director of the European Wind Energy Association (EWEA).