Shell’s portfolio is the most aligned with the Paris climate targets, but would still need cuts of 10%, the report found. [Bill / Flickr]

The world’s largest oil and gas companies must cut combined production by 35% by 2040 if nations are the meet the collective ambitions of the Paris Agreement and limit global warming to below 2C, a new report from Carbon Tracker has found. EURACTIV’s media partner edie.net reports.

According to the report, the world’s carbon budget to limit temperature rise to 1.5C and 1.75C will be exceeded in 13 years and 24 years respectively.

However, approved oil and gas projects yet to be built are already sufficient to meet energy demand and carbon budgets in a world where temperature rise is limited to 1.6C above pre-industrial levels. The report warned that there is little to no room for future fossil fuel projects.

Carbon Tracker’s oil and gas analyst and report author Mike Coffin said: “If companies and governments attempt to develop all their oil and gas reserves, either the world will miss its climate targets or assets will become “stranded” in the energy transition, or both.

“The industry is trying to have its cake and eat it – reassuring shareholders and appearing supportive of Paris, while still producing more fossil fuels. This analysis shows that if companies really want to both mitigate financial risk and be part of the climate solution, they must shrink production.” 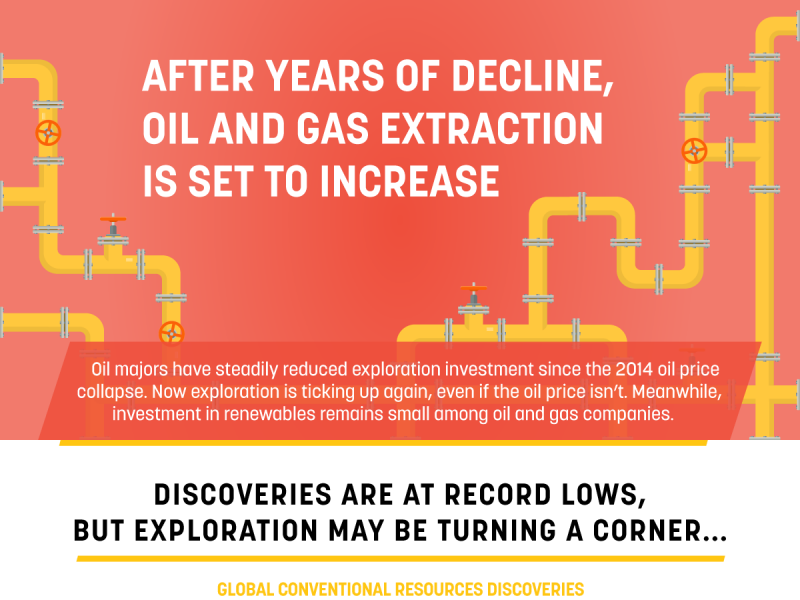 Oil majors have steadily reduced exploration investment since the 2014 oil price collapse. Now exploration is ticking up again, even if the oil price isn’t. Meanwhile, investment in renewables remains small among oil and gas companies.

The report identified which oil and gas businesses could still be economic in a 1.6˚C world using the International Energy Agency’s Beyond 2 Degrees (B2DS) scenario – which explores decarbonisation pathways based on readily available technologies.

Since 2011, the global proved reserves of oil and gas have increased, and fossil fuel giants such as ExxonMobil, ConocoPhillips, Shell and Total are faced with huge production cuts in order to be viable in a low-carbon future.

The report found that none of the major companies are on track to be aligned with Paris by 2040. ConocoPhillips faces the biggest production cuts of 85%; ExxonMobil, the biggest oil major, would need cuts of 55%; Eni requires cuts of 40%, Chevron and Total both 35%, and BP 25%. The report found that Shell’s portfolio is most aligned, but it would still need cuts of 10%.

The analysis builds on another Carbon Tracker study which found that coal-fired power plants in the EU are becoming increasingly unprofitable and have incurred losses worth €6.6bn in 2019.

The study indicated that 79% of all European coal-fired power plants are now making losses. Germany is the most affected with losses amounting to €1.9bn, while Spain (€992m) and the Czech Republic (€899m) trail close behind.

Despite the losses, driven by low-carbon policy frameworks and heightened investor scrutiny, global oil and gas firms have collectively invested just 1.3% of their combined capital expenditure (CAPEX) into low-carbon technologies and projects since the start of 2018, CDP has found.

The UK’s offshore oil and gas industry has published a blueprint to contribute to net-zero emissions by 2035, but it has been branded as “overt lobbying” by green groups.

Responding to Carbon Tracker’s report on the need to cut fossil fuel production to fight climate change, Isabella O’ Dowd, Climate and Energy Specialist at WWF, said: “We are not just burning fuel, we are burning our future. The climate crisis is the biggest environmental challenge we’ve ever faced and yet we are fanning the flames with the extraction and burning of fossil fuels.

“Next year, the UK will host a global climate summit giving us a major opportunity to show international leadership in tackling this planetary emergency. But we must demonstrate we’re walking the talk at home by taking rapid and ambitious action to end our investment in fossil fuels and reduce our emissions.”