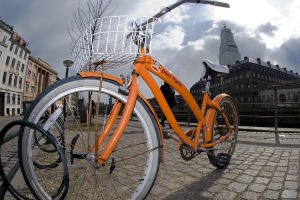 If all Europeans cycled as much as the Danes, the EU could meet more than a quarter of its 2050 target for a 60% cut in carbon dioxide emissions in the transport sector, according to the first study of cycling’s CO2 mitigation potential.

The figure would rise to 50% of the EU’s target if Europeans cycled 5 kilometres a day, says an author of the European Cycling Federation (ECF)’s report, Benoit Blondel.

“The potential for cycling to achieve these targets is huge,” he said, “and with such little effort. Getting more people on bikes is going to be a lot cheaper than getting more electric cars on the road”.

Lifecycle emissions from cycling are more than 10 times less than those from passenger cars, the report says, even taking into account the dietary intake of cyclists.

Cyclists consume more calories than motorists – and release them as fuel – because of the extra energy needed to propel their vehicles.

The report toted up all aspects of the food production process – farm machinery, irrigation, the use of pesticides and fertilisers, as well as the CO2 intensity of various foods – and estimated this fuel release at 21 grams of CO2 energy per passenger kilometre travelled.

The researchers chose Denmark "but the Dutch would not be happy if we said the Danes were the most enthusiastic cyclists in Europe," another of the report’s authors, Chloe Mispelon, said.

Copenhagen has a 50% target for cycling trips by 2020. Although Danes cycle more kilometres per year, the Netherlands has Europe’s best share of cycling trips per person, she added, helping Europe meet its climate goals.

The EU’s transport targets are part of an overall strategy for reducing greenhouse gas emissions by 80-95% from 1990 levels by mid-century.

Scientists say this is the minimum needed to cap global warming at two degrees Centigrade, after which its effects could become disastrous.

But between 1990 and 2007, greenhouse gas emissions from transport in the EU actually rose by 36% while falling 15% in other sectors.

Part of the problem, according to the ECF, is the low priority afforded to cycling as a mode of transport.

“From 2007 until 2013, the Commission has earmarked €600 million for cycling infrastructure,” ECF spokesman Julian Ferguson told EURACTIV. “That’s just 0.7% of an €82 billion fund.”

“We don’t do much on cycling and CO2,” an EU spokesman contacted by EURACTIV confirmed. “You have to bear in mind that the money in the transport budget is for things that the EU can actually legislate about.”

But environmentalists say that despite subsidiarity arrangements, the EU could still legislate for segregated cycle pathways, and consider "externalities" such as pollution, congestion, noise and accidents in road tax policy.

In their report ‘Cycle more often to cool down the planet,’ the ECF quantified data from the French Environment Agency ADEME and the Dutch independent research body TNO to assess the lifecycles of different forms of transport in three phases:

Infrastructure and disposal were not included in the methodology – partly because of a lack of access to statistics – but if they had been, the emissions figures for cycling would have been even lower.

But cycling is not a "zero-emissions" option, because of the extraction and manufacturing of raw materials such as aluminium, steel and rubber needed to create bicycles in the first place.

Emissions from e-bikes were also found to be in the same range as ordinary bicycles, despite their electricity needs, because they allow for 56% longer daily commutes and can substitute for cars on 39% of journeys.

On several occasions, the then-transport commissioner, Antonio Tajani, said that he would introduce measures to promote bicycling in Europe’s cities in the EU’s Urban Mobility action plan of 2009. However, when it arrived, there were none.

Projects related to cycling have also been funded through the STEER Programme, which promotes more sustainable energy use in transport, and CIVITAS, an EU initiative that helps cities to achieve a more sustainable, clean and energy-efficient urban transport system.