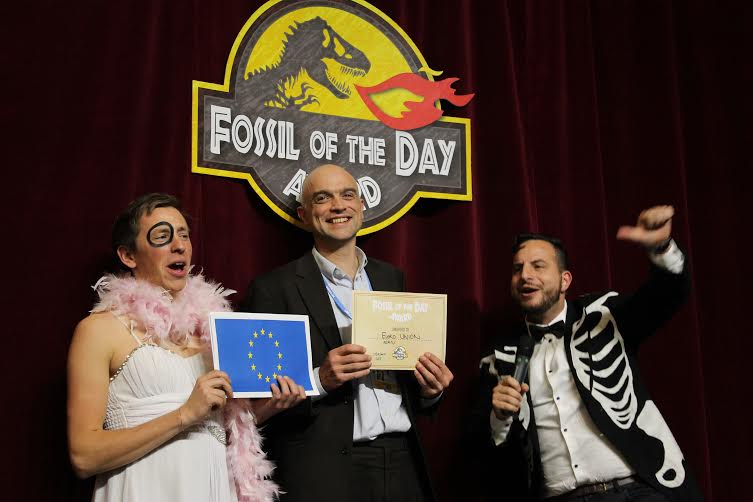 Poland was singled out for blocking an EU push for decarbonisation in the latest draft COP21 agreement circulated on Thursday evening (10 November), earning the EU a “Fossil of the Day” award by green NGOs.

As discussions continue at the UN Climate Change Conference (COP21) in Paris, the latest version of the draft agreement highlighted divisions among member states over some key wording.

The European Unioned managed to gather support from all of its members to limit global warming to 1.5°C above pre-industrial levels, EURACTIV has learnt—a target that was not on the agenda before COP21 opened.

On Wednesday, the United States, the EU, and other countries from the so-called High Ambition Coalition, such as Norway and Mexico, said they supported that goal. The target should stay in the final agreement, but as a signal of future ambition, rather than a binding target.

The latest draft refers to the 1.5° objective with square brackets, signalling that the objective is still up for discussion.

But another ambitious target did not win support from all EU member states.

Some countries got cold feet about the word ‘decarbonisation’, which could have been included in the text. Decarbonisation means moving towards a zero emissions business model.

According to some sources, Poland vetoed the idea. The country is still heavily dependent on coal for electricity production.

Asked by EURACTIV about Poland’s stance, the Commissioner for Climate Action, Miguel Arias Cañete, replied: “We have had a mandate from member states to underline a path to carbon neutrality, not decarbonisation.”

As a result, all references to decarbonisation have been removed from the latest draft agreement circulated on Thursday. Instead, new wording refers to “greenhouse gas emissions neutrality”.

An EU source sought to downplay divisions among EU countries, saying the Polish team was being helpful on other issues.

The so-called ‘Umbrella Group’ of Canada, Russia and Kazakhstan, which also received a Fossil award, is working hard against a strong agreement with Australia, Japan and other unmotivated countries.

The “EU has a real problem negotiating, as it has not much to offer. The EU position is a mandate between 28 countries, and you can’t change that quickly. And we are the only one to have this constraint,” Ian Duncan, the lead MEP on the reform of the bloc’s Emissions Trading Sytstem, told EURACTIV.