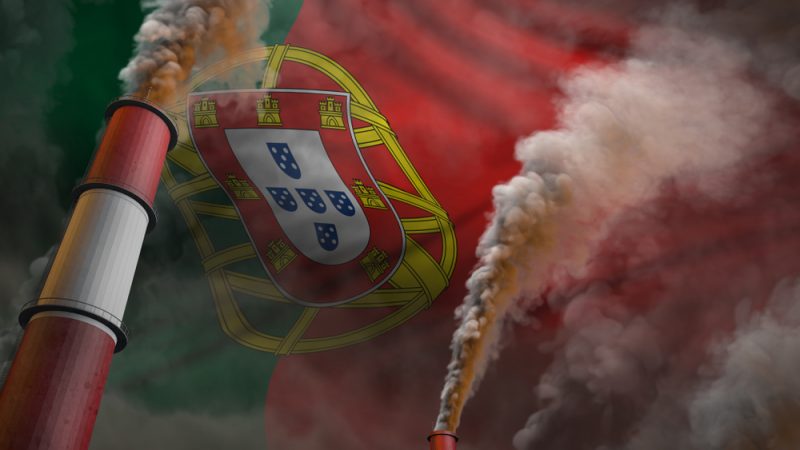 Compared to the 1990s, the new and next generations have a limit on greenhouse gas emissions available that is 41% lower than today. [Shutterstock/Dancing_Man]

Portugal has exceeded pollution limits in all environmental categories like greenhouse gas emissions and air pollution, according to a study released on Wednesday (1 December), which said future generations will have to emit half the amount of its predecessors.

Researchers from the Instituto Superior Técnico concluded that limits have already been exceeded in all environmental categories, such as greenhouse gas emissions, waste production, water and air pollution, freshwater consumption or pressure on ecosystems, which in this case is within the limits, but only because Portugal is not self-sufficient in food.

Compared to the 1990s, the new and next generations have a limit on greenhouse gas emissions available that is 41% lower than today.

The study “Ecological Limits: The Intergenerational Impact of the Use of Natural Resources”, under the project dedicated to Intergenerational Justice, of Lisbon’s Gulbenkian Foundation Future Forum, was presented on Tuesday in an online session for journalists and was coordinated by Tiago Domingos and Ricardo da Silva Vieira, from the Instituto Superior Técnico (IST), and was developed by Maretec, IST’s research centre.

The researchers calculated the impact of the use of natural resources by different generations in Portugal, identifying the legacy (or burden) left to future generations, and concluded that the legacy of past generations has a significant weight in climate change.

Older generations have much higher environmental impacts per capita than younger ones, especially with regard to water pollution and pressure on ecosystems, the study found.

Another finding is that all generations, with the exception of those born from 2000 onwards, have exceededecological limits. Those born between 1940 and 1959 have moved furthest away from the limits, producing the most greenhouse gas emissions.

Yet the authors note that the older generations, despite having greater environmental impacts, were also those who contributed to policies that helped to partially decouple environmental indicators from economic growth.

The introduction of natural gas and renewable energy reduced air pollution and greenhouse gas emissions, which also fell with energy efficiency measures and less polluting transport. And waste recovery policies have also had an effect on the environmental impact of waste disposal.

Ricardo da Silva Vieira explained that seven categories of environmental impact were analysed (identifying the ecological limits within each one) and six generations were defined, covering the entire last century until the present.

All generations, he pointed out, have exceeded the different limits estimated in the study (based on official data and the Paris Agreement targets on reducing greenhouse gas emissions), with the exception of the youngest, and all generations have a high point of environmental impact, which happens earlier and earlier in each new generation.

There is evidence that “the impacts of the younger generations are tending to be lower”. Because the peak impact of each generation has been lower and lower and even the environmental impacts at the national level are also decreasing, including climate change.

Domingos added that in the case of climate change, each year is above what can be emitted in terms of greenhouse gases.

Ricardo da Silva Vieira had previously spoken of the great evolution in the area of the environment, where there is now much more information and awareness, and where there are many more options in terms of cleaner technologies. Not to mention the public policies that changed from 2000 onwards the direct connection between economic growth and environment, with the former not necessarily having to generate environmental impacts today.

“Human development patterns and economic activities have resulted in sustainability challenges of unprecedented scale and urgency, such as climate change and global biodiversity loss. This worrying development raises the critical question of whether human-induced pressures exceed the environmental limits of planet Earth,” warns the Gulbenkian Foundation.