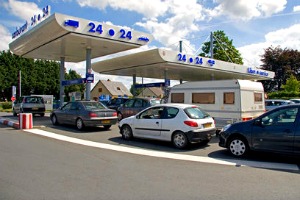 Ambitious fuel savings targets such as those proposed by the EU can cut motorists expenses by enormous sums, according to research conducted for Greenpeace by the former chief of the UK’s Environment Agency, Malcolm Fergusson.

His study predicts that car owners' annual average fuel costs – currently ranging between €1,235 per motorist in Luxembourg to €2,143 in Sweden – would plummet with tighter CO2 targets.

If an expected EU target of 95 grams of CO2 emissions per km (g/km) for new cars is confirmed in July, the average fuel cost per motorist would drop to between €962 and €1,665 annually by 2020, the report said (this figure also assumes a 147g/km target for vans).

“The lesson from these figures is clear,” said Franziska Achterberg of Greenpeace. “A weakened law will pile hundreds of euros extra on drivers' fuel bills, while a strong one will do a lot to shield them from rocketing fuel prices.”

Petrol prices are currently at record levels across much of the EU. In the UK, the situation is dire with a litre of petrol currently costing €1.71 and the motorists’ body the AA predicting it to rise by another three cents by the summer.

In his research, Fergusson, who has previously provided CO2 and cars models for the EU, sets out five regulatory scenarios for the UK (and other member states), ranging from a legislative cap after 2015 to a 60g/km target by 2025.

The results of Fergusson’s number crunching for an average British driver were that:

Road transport currently accounts for 22% of the UK’s total carbon dioxide emissions, and an estimated 85% of that figure has been sourced to fuel use and servicing operations.

But some in the automotive industry challenge the idea that strict regulations will reduce costs for motorists, saying that they will push up car prices.

But one group, the International Road Transport Union (IRU), spoke out for the haulage sector, saying that “long-term targets should not be set by EU legislation” until new procedures for declaring fuel consumption and CO2 generation had been designed.

“Until then, voluntary targets as set by the road transport industry should be encouraged,” their submission says.

The Commission received twice as many responses to its consultation from businesses and professional associations as from NGOs, trades unions, political parties and others combined.

Brussels said that vehicle manufacturers “raised concerns over setting long-term targets and called for the focus on implementation of the existing legislative framework.”

But Achtenberg said that such grumbling was de rigeur.

“Carmakers will always complain about the targets but once they get serious they get it done,” she told EURACTIV. “It's up to lawmakers in Brussels to set the pace, for the sake of the environment and the economy.”

Preliminary data collected by the International Council on Clean Transportation indicates that EU car manufacturers are on track to meet a 2015 target of 130g CO2 per km (g/km) ahead of time.

In 2007, the EU proposed legislation setting emission performance standards for new cars, which was adopted in 2009 by the European Parliament and the EU Council of Ministers. Today it is the cornerstone of the EU's strategy to improve the fuel economy of cars and ensure that average emissions from new passenger cars in the EU do not exceed 120 grams CO2/km.

The much-anticipated White Paper on Transport, presented by the Commission in February 2011, flagged measures to raise the €1.8 trillion which the EU says is needed for infrastructure investment in the next 20 years to build a competitive transport system that will increase mobility, remove major barriers in key areas and fuel growth and employment.

At the same time, the Commission said its proposals will dramatically reduce Europe's dependence on imported oil and cut carbon emissions in transport by 60% by 2050.

July 2012: European Commission expected to announce fuel efficiency target for 2020 of 95 grams of CO2 emissions per km for cars.

2015: Deadline for car manufacturers to reduce CO2 emissions to 130 grams per mk.