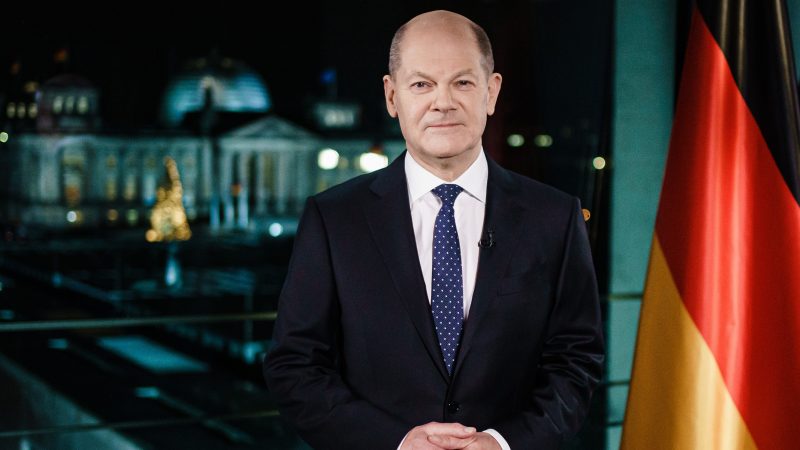 German Chancellor Olaf Scholz poses for photographs after the television recording of his first New Year's speech at the chancellery in Berlin, Germany, 30 December 2021. [Pool/EPA/EFE]

Germany wants to use its presidency of the Group of Seven (G7) to develop it into a club that is pioneering in its efforts to achieve green growth and a socially just world, Chancellor Olaf Scholz said in his first New Year’s address.

“Starting tomorrow, Germany will for one year take over the presidency of the group of seven economically strong, democratic states – the G7,” Scholz said in his speech on Friday (31 December), according to a pre-released transcript from the government’s press office.

“We will use our presidency so that this group of states becomes a pioneer – a pioneer for a climate-neutral way of doing business and a fair world,” Scholz said.

Germany is due to take over the G7 (“Group of Seven”) Presidency on 1 January 2022 and will therefore host the annual meeting of the heads of state and government of the G7 countries. The G7 consists of Germany, France, the United Kingdom, Italy, Japan, the United States of America and Canada. The European Union is also represented at all G7 meetings. The G7 Summit is to be held at Schloss Elmau in the Bavarian Alps from 26 to 28 June 2022.

In his previous roles as vice chancellor and finance minister, Scholz suggested that the European Union should team up with countries like the United States, Canada and Japan to create a “climate club” in which members agree joint rules and common standards on how to reduce carbon emissions.

The goal of such a club would be not only to accelerate the global shift towards a more climate-friendly economy, but also to avoid trade friction linked to different green tariff regimes, such as the EU’s planned carbon border levy.

“International cooperation is important. In a world that will soon be home to 10 billion people, our voices will only be heard if we perform in a choir with many others,” Scholz said.

That is also the reason why Germany’s new coalition government is determined to strengthen the European Union, said Scholz, who succeeded long-serving former Chancellor Angela Merkel earlier this month.

“Our goal is a sovereign, strong Europe. A Europe that lives according to its common values ​​of peace, the rule of law and democracy,” the chancellor added.

On the issue of Ukraine, where Western countries are concerned by a Russian military build-up near the border, Scholz reiterated that the territorial integrity of Ukraine must be respected. Germany would continue to work closely with transatlantic allies to guarantee peace, he said.

“With a view on Ukraine, we are currently facing new challenges. The inviolability of borders is a high good – and not negotiable,” Scholz said.