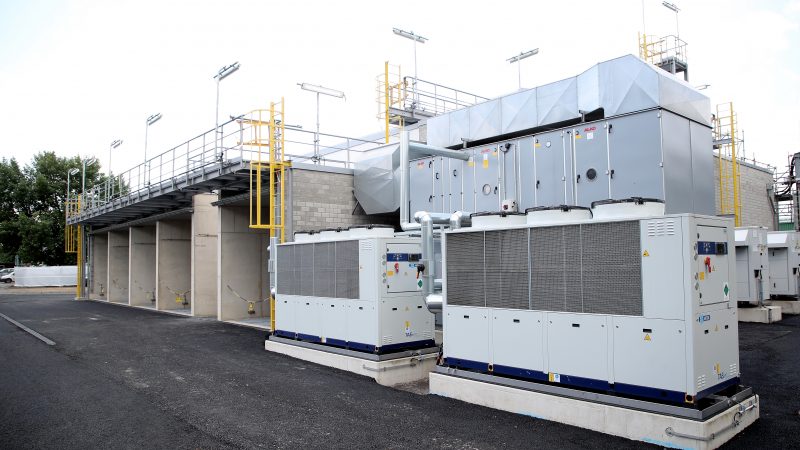 The global warming potential of hydrogen and the impact of leaks may imperil climate goals like the 1.5° target. EPA-EFE/FRIEDEMANN VOGEL

Scientists have warned that hydrogen could be a significant “indirect” contributor to the greenhouse effect when it leaks through infrastructure and interacts with methane in the atmosphere.

Last year, the European Commission presented a hydrogen strategy, saying that clean hydrogen could meet 24% of the world’s energy demand by 2050 and help decarbonise hard-to-abate industrial sectors like steel and chemicals.

Hydrogen only releases water vapour when burned, prompting policymakers to put their hopes into the new gas as a way of tackling climate change.

But hydrogen itself is an indirect contributor to global warming, said Steven Hamburg, chief scientist at the Environmental Defense Fund (EDF), a US-based non-profit group.

And its effect on the climate has so far remained largely unexplored.

“Hydrogen is a potent short-lived indirect greenhouse gas that is 200 times more potent than carbon dioxide at the time it is released, kilogramme for kilogramme,” Hamburg told EURACTIV.

Hamburg is a former professor of environmental science who served as a lead author for the UN’s Intergovernmental Panel on Climate Change (IPCC). He says hydrogen is problematic because it interacts with methane in the atmosphere.

“Hydrogen that leaks to the atmosphere is such a potent greenhouse gas because it extends the lifetime of methane in the atmosphere, causing it to stick around and continue contributing to the greenhouse effect,” he told EURACTIV.

Hydrogen is such a potent indirect greenhouse gas that it “could undermine the climate benefits of decarbonisation efforts,” warned Ilisa Ocko, a senior climate scientist at the EDF, who spoke at a EURACTIV event on 29 September.

When these atmospheric effects are taken into account, the climate benefits of replacing fossil fuels with hydrogen becomes less clear, she cautioned – even when hydrogen is produced from renewable electricity.

When it presented its hydrogen strategy last year, the European Commission set out a clear priority to develop renewable hydrogen, produced mainly from clean energy sources like wind and solar energy.

In Europe, countries like France and Germany have adopted hydrogen strategies backed by billions of euros in government funding.

“We need green hydrogen for our energy-intensive industry, long-haul transport, as well as seasonal storage,” said Henrike Hahn, a German Green MEP who spoke at the EURACTIV event.

“Hydrogen rocks and the Commission is determined to make it rock further,” added Sarah Nelen, the deputy chief of staff of Commission vice-president Frans Timmermans, in charge of the European Green Deal.

Hydrogen has gained prominence in the last two years, and many EU member states have included hydrogen deployment programmes in their national recovery plans, Nelen said.

However, those plans now risk being thrown into doubt because of potential leakages in hydrogen infrastructure, EDF says.

“The extent to which green hydrogen benefits the climate will depend on how much hydrogen is ultimately leaking,” said Ocko. She explained that current measuring systems have a detection threshold which is too high, suggesting leakages are currently under-reported.

As a consequence, “we don’t know how much hydrogen is currently leaking,” she said, highlighting the need for more research and measurements to better understand hydrogen leakage.

Other scientists confirmed to EURACTIV that hydrogen leakage could pose a climate risk but said the extent of the problem needs further research.

Scientists at the CICERO institute in Oslo are among those researching the climate impacts of hydrogen. A preliminary proprietary research paper, published on their website, states: “Hydrogen gas emissions to the atmosphere can very likely cause global warming through indirect effects.”

CICERO declined to comment for this article, saying their research was not mature enough.

Other scientists contacted by EURACTIV agree that the issue of hydrogen leakage merits further attention.

Scientists who have looked into the matter have drawn parallels between hydrogen and methane, saying the two gases have similar tendencies to leak from pipes and other equipment, said Mike Fowler, director of advanced energy technology research at the Clean Air Task Force (CATF), a US environmental organisation.

Common figures for methane leakage range between 0.5% and 3%, according to a recent paper by Ueckerdt. Since hydrogen molecules are significantly smaller than methane, one ton of hydrogen consumption could leak between 5-30kg of the gas.

That 5-30kg range would have the same climate impact as 1-6 tons of CO2-equivalent, according to the 200x greenhouse effect potency put forward by Hamburg and Ocko.

Yet, there is reason to believe that hydrogen leakage will be much more limited. One of the primary sources of methane leakage, gas wells, is not an issue in the hydrogen value chain, said Magnolia Tovar, Europe director for zero-carbon fuels at CATF.

In addition, “safety protocols for hydrogen are higher than for natural gas,” he told EURACTIV, saying this tends to reduce the risk of leakage.

There is a safety aspect as well. “With the kind of high pressures needed for hydrogen transmission systems, leaks could be catastrophic due to the high flammability of the gas,” Flis explained. It is therefore imperative to minimise leaks for basic safety reasons, he remarked.

Flis said he did not expect hydrogen to be transported in low-pressure networks, which are more prone to leakage. As these are traditionally used for residential heating, hydrogen is unlikely to play a significant role there, he said.