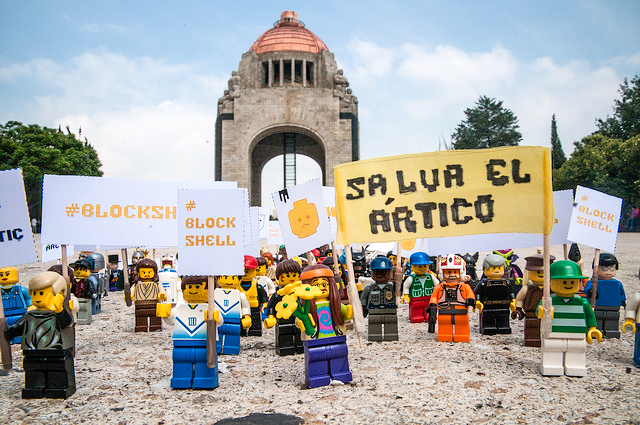 At the time of the deal European commission president, José Manuel Barroso, said: “This package is very good news for our fight against climate change.” Adding: “No player in the world is as ambitious as the EU.”

But it now appears that a key part of the agreement – which was championed by the UK government – was proposed by a Shell lobbyist as early as October 2011.

At the 2014 meeting heads of government agreed a 40% overall target for the bloc’s emissions cuts, but in the run up to the deal there had been disagreement between member states about how best to achieve that. The UK and others had resisted binding targets for individual member states on energy efficiency and renewable energy and these did not make it into the final agreement. Proponents of renewable energy say this was a key missed opportunity to give a strong signal to investors that the EU was serious about clean energy.

Now documents released to the Guardian under freedom of information laws show that as far back as October 2011, Shell had begun lobbying Barroso, who was succeeded by Jean-Claude Juncker last November, to scrap the bloc’s existing formula for linking carbon-cutting goals with binding renewable energy laws.

Shell argued that a market-led strategy of gas expansion would save Europe €500bn (£358bn) in its transition to a low carbon energy system, compared to an approach centred on renewables. “Gas is good for Europe, and Europe is good at gas,” the firm’s upstream executive director, Malcolm Brinded wrote in a five-page letter to Barroso.

“Shell believes the EU should focus on reduction of greenhouse gases as the unique climate objective after 2020, and allow the market to identify the most cost efficient way to deliver this target, thus preserving competitiveness of industry, protecting employment and consumer buying power, to drive economic growth,” he wrote, adding in a hand-written note at the end, “This is a great opportunity for the EU to seize!”

Shell is the sixth biggest lobbyist in Brussels, spending between €4.25-4.5m a year lobbying the EU institutions, according to the bloc’s transparency register.

Participants in the 2030 negotiations confirm that Shell was the first lobbyist to push for a single target in Brussels, and its heft gave the idea momentum. “Shell has a lot of clout in the UK, where they are very active in the policy debate,” a source close to the lobbying discussions said. “That is partly because the UK likes to have companies saying what the UK government wants to hear.”

The firm’s ‘single target’ idea gathered traction, particularly among supporters of nuclear power and shale gas, and was agreed as an official position in discussions between the UK Treasury and the Department of Energy and Climate Change in mid-2013.

Britain spearheaded the idea, with support from other countries in inter-state Green Growth Group meetings that year, before successfully getting a variant of the idea into the final agreement last October.

The bloc agreed that by 2030, every country would cut its emissions by 40%, measured against 1990 levels, and that although the EU as a whole would commit to a 27% share for renewables in the energy mix, that target was not binding on individual member states.

But the clean energy industry says that this is not enough to give investors the long-term certainty that they need.

“An ambitious greenhouse gas target is a crucial signal to the most polluting power stations, but it is not an effective driver for the energy transition towards renewables,” said Frauke Thies, a policy officer for the European Photovoltaic Industry Association.

“The 2030 package was a once in a decade opportunity to send a signal to clean energy investors,” added Brook Riley, a spokesman for Friends of the Earth Europe. “The EU chose to reward the fossil fuels lobby instead.”

Shell was not the fiercest opponent of climate action in the 2030 debate, and some see it as the most progressive of the big fossil fuel firms. It supports a strong emissions trading scheme (ETS), carbon capture and storage technology, and factors a $40 a tonne CO2 price into some of its long-term investment decisions.

Most of Shell’s operations are now gas rather than oil-based and the firm has invested heavily in Brazilian bioethanol. But environmentalists object to the company’s pursuit of Arctic drilling and its extraction of Canadian tar sands, one of the most polluting fossil fuel sources.

A Shell spokesperson said the company supported the 40% target agreed last October. “Our position is clear: we support an ambitious GHG [greenhouse gas] target, driven through a strong and functioning carbon market. This delivers the most cost effective decarbonisation. A strong ETS, as well as focus on innovation funding will support renewables without the need for binding targets.”

On the company’s lobbying efforts the spokesperson said: “Shell engages with European policy makers on a wide range of topics on a regular basis”.

The European commission said that Shell had been one of 550 stakeholders who contributed to a green paper on 2030 targets in March 2013. “This stakeholder consultation provided important input into the further process,” a spokesperson said. But the commission declined to comment on any engagement with the firm before that date.

The UK government was never an advocate of EU-wide renewable energy targets – which it saw as costly, ambitious, and encroaching on national sovereignty.

In the 2030 debate though, the UK claimed a leadership role in harnessing consensus across a divided bloc for an emissions target that did not torpedo decarbonisation hopes.

Unlike most European countries, the UK has a carbon floor price that may help to trigger some fuel switching from coal to gas.

Gas releases about half as much carbon as coal when burned, although over its full lifecycle, this is still 40 times more than wind, according to the IPCC. As a flexible backup to often intermittent renewable energy supplies, analysts say that it may provide a crucial, if short, bridge to a clean energy system.