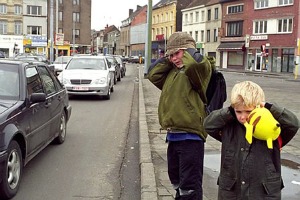 The cumulative effect, says the organisation that commissioned the report, is that “the benefits of cutting noise outweigh the costs by more than 30 times.”

But the study by the TNO consultancy effectively argues that this does not go far enough, or fast enough. The study was commissioned by the Netherlands' environment ministry and the pressure group Transport and Environment (T&E),

“To speed up the benefits of noise reduction, you need bring forward the timetable for implementation,”  Nina Penshaw, a T&E spokeswoman, told EURACTIV.

“You could ask industry to reach an overall noise reduction equivalent to taking half of today’s traffic off the road,” she said.

Road traffic noise is Europe’s most ubiquitous environmental health problem, with more than 44% of the population – 210 million people – estimated to regularly suffer volumes above 55 decibels.

At this level, voices must be raised to become audible and medical risks increase correspondingly, according to the World Health Organization.

One recent study by CE Delft found that 50,000 people died prematurely and 200,000 suffered from cardiovascular disease each year in the EU because of traffic noise.

Reducing noise levels would save €89 billion in health costs by 2030, shave €8 billion off insulation expenses and add €229 billion to the property values, the TNO report says.

In 2012, Brussels proposed legislation with milestones in 2014 and 2017 to reduce noise levels for new cars and vans by 4 decibels and for new lorries and buses by 3 decibels.

The aim is to reduce the amount of people ‘highly annoyed’ by noise pollution by a quarter. But the new standards would not affect older auto models and because the sale of non-compliant noisy vehicles would not be restricted until 2019, the legislation’s benefits may only be fully felt after 2030.

As a result, a coalition including T&E, the European Environmental Bureau and Environment Alliance are taking up the TNO alternative proposal with a call to the European Commission to implement a five step plan by:

An EU spokeswoman told EURACTIV that “the Commission has set the ball rolling towards the revision of the Noise Directive, and expects this to be concluded during the course of the current mandate.”

The European Parliament’s environment, transport and internal market committees are due to vote on the regulation this summer.