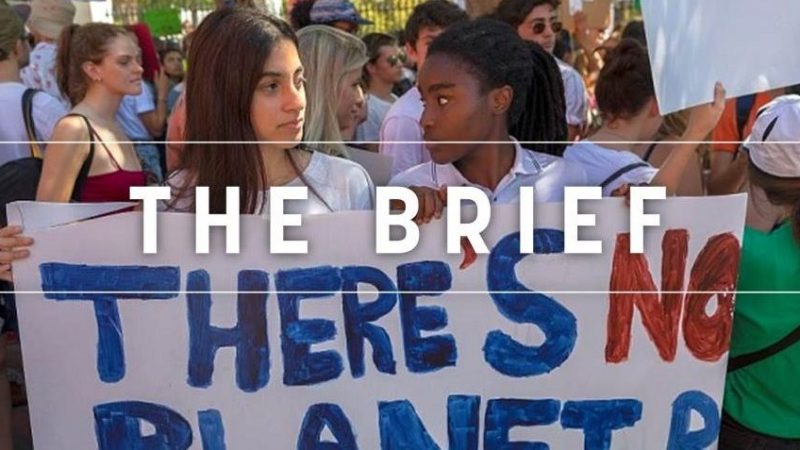 As the day began, 1,693 protests had been registered across 106 countries, under the #FridaysForFuture banner.

The school kids have a simple assignment for our politicians: First, listen to the science, absorb its findings. Then, figure out the maths and solve the equation. According to the  Intergovernmental Panel on Climate Change (IPCC), they have about 11 years to deliver their copy and prevent irreversible climate change.

It all started last year when a 16-year old girl, Greta Thunberg, decided to skip class to protest in front of the Swedish Parliament, holding a hand-painted banner, attracting pity and bemusement from passers-by.

Back then, Greta was on her own. Now, her climate strike has inspired a worldwide movement while Greta has been nominated for the Nobel Peace Prize.

Scientists were among the first to give their backing to the climate strikes. In Belgium, more than 3,000 have signed up to the cause. In the UK, more than 220 of them have expressed their support. And in France, a group of scientists have themselves decided to go on strike (what else would the French do?)

The scientists could hardly disagree. “Just unite behind the science, that is our demand,” Greta said when she came to Brussels last month.

Some politicians have openly backed Greta’s cause, including Michael Gove, the UK’s environment minister. This is to be commended, but the truth is, they are incapable of delivering, even if they wanted to.

How could they? To prevent irreversible warming, a reduction of at least 50% in global CO2 emissions is needed, every single year, until 2030. For Europe, that means cutting emissions by 80% minimum by the same date, when all politicians could agree to was a mere 40% goal.

For journalists like me, who witness every day the fraught politics of climate change in Europe, just imagine the mess when the same disputes are brought to the 195 parties of the Paris Agreement.  Let’s face it, the assignment is insurmountable.

Again, Greta put it squarely and in incomparably powerful terms: “Once you have done your homework, you realise that we need new politics. We need new economics where everything is based on our rapidly declining and extremely limited remaining carbon budget.”

But even that is not enough, she says. “We need a whole new way of thinking” where politicians stop being rewarded for cheating “because all that matters is to win to get power.”

Speaking truth to power is traditionally regarded as one of the core missions of journalism. Today, no one better than Greta has been able to fulfil this role.

For that, maybe she does deserve the Nobel Peace Prize.

Slovak prosecutors said on Thursday (15 March) they had charged an entrepreneur with ordering the murder of investigative journalist Ján Kuciak, whose killing in 2018 had triggered mass protests and toppled the country’s prime minister.

Despite good intentions, the Juncker Commission has had only mixed results on the fair taxation agenda, in the face of resistance from a number of member states.

Control of organic farming in Europe has improved but more work is needed to prevent food fraud and ensure that organic standards are met, European Court of Auditors (ECA) said in a report.

EU leaders have called for clarity from the UK before considering any delay to Brexit, with only fourteen days left until Brexit day (29 March).

Check out today’s The Capitals, in which former Slovenian prime minister Janez Janša says it was Commission boss Jean-Claude Juncker who first attacked Hungary’s embattled leader Viktor Orbán, plus so much more from across Europe…

The third and final vote in UK parliament on Theresa May’s Brexit deal, followed by an EU summit on Thursday/Friday, which will determine if the UK gets extra time after 29 March to sort itself out.