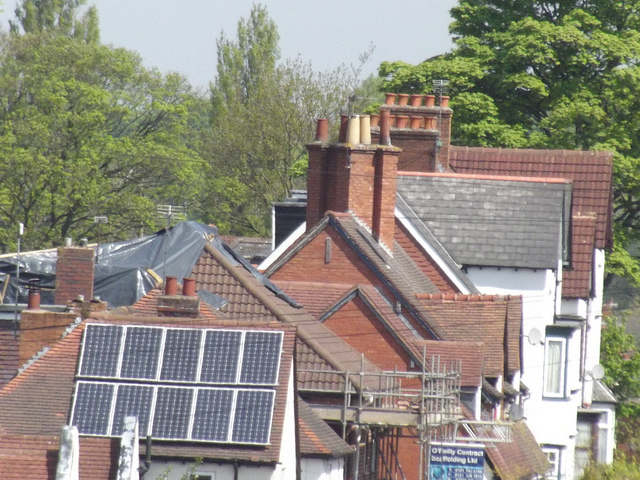 Europe’s largest conservation organisation to use solar, biomass and hydro power to supply half its energy needs for its estates, historic houses and palaces.

The National Trust is to invest £30m in solar panels, woodchip boilers and innovative technology that can extract heat from a lake, in a bid to supply half of its energy needs from renewable sources by 2020.

The significant investment in renewable power by Europe’s largest conservation organisation is an eightfold increase on the £3.5m the trust has already invested in five pilot green projects.

Although the trust has opposed individual windfarms on visual grounds in the past it says it believes strongly in renewable energy and laid out a plan in 2010 to cut its fossil fuel use in half to tackle global warming.

“In setting out our 10 year plan we recognised we will have to play our part in helping to mitigate climate change. A key part of that is to reduce our reliance on oil and look for greener energy solutions,” said Patrick Begg, the trust’s rural enterprises director.

“We have a responsibility to look after the special places in our care, requiring us to make long-term decisions that will protect them for future generations.”

The charity estimates the renewable energy schemes planned at 40 sites will save 2,586 tonnes of CO2 a year, and will cut its energy usage by 20% through energy efficiency measures . A big challenge for the trust is the historic and energy inefficient nature of many of its properties, many of which are off the gas grid.

One of the pilots is a biomass boiler which will heat the entire property at Ickworth, a Georgian palace situated inside 8,000 acres of National Trust parkland in Suffolk.

The boiler replaces the old oil one and sits where the gardner’s shed used to be, in a small building designed to reflect the property’s italian architecture, with customised slots where some of the nine bat species on site are able to roost. It runs automatically 24 hours a day and creates only waste ash in the process, filling a single wheelie bin every two months.

Visitors can step inside to see – and smell – five tonnes of pungent pine wood chippings, the stored remains of about 20 trees from the estate. Its 600 acres of woodland will provide all of the fuel needed for the 200kW boiler. Last year they spent two weeks felling 440 tonnes of wood –18 months supply of wood chip – through a process of thinning 20% of the trees in the more tightly packed areas of woodland.

Dee Gathorne-Hardy, the park’s senior ranger, says that far from being harmful, the thinning is a necessary part of woodland management that will increase biodiversity by creating light and space on the floor for new habitats and fresh plants to spring up.

“It’s hardly noticeable – we’d be chopping down these trees anyway – to get the best value woods need thinning all the time. In fact at one point it used to cost more to go in, cut it down, get it out and sell it than the money you would get back. But with the raw incentive for renewables it actually creates value now.”

The trust estimates the new system at Ickworth will save £13,000 a year in fuel costs, part of the £4m they hope to save in total. They also have plans to sell some of the electricity generated from the projects back to the national grid – money that it will reinvest in conservation projects.

“This tank is alarmed” reads the sign on the 5,000 litre oil tank outside, which became redundant when the new boiler was switched on on Monday. The estate once suffered the theft of all of its oil, but this something it will no longer have to consider, as well as other risks such as the contamination of nearby ponds or vulnerability to fluctuations in the oil price.

Many of the National Trust properties use oil because they are in isolated areas that often have no access to the national gas grid. Begg says that installing renewable technologies in these locations has been a “huge challenge”.

“Some of our properties are in really sensitive locations so it was also a challenge to find people who can treat our places well,” he says.

Two-thirds of the 40 projects will also run on biomass, to take advantage of the vast areas of National Trust woodland. Others will depend on solar, heat pumps and hydro. Projects include a hydro-electric project in the Lake District and a lake source heating project in Norfolk which compresses and expands the natural heat from the lake, using a heat exchanger to turn it into energy.

The charity is the UK’s largest private landowner, with 250,000 hectares of land and has been previously criticised for successfully blocking onshore windfarm developments, the UK’s cheapest source of renewable energy. Two years ago they fought – and won – a high court battle against the development of a wind farm in Northamptonshire, which was within sight of one of its properties.

But Begg told the Guardian that the charity “is not anti-wind, only anti-big infrastructure at the wrong scale and in the wrong location”.