Ahead of a UN General Assembly meeting in New York this week and the COP23 climate summit in Bonn in November, EU, Chinese and Canadian officials met in Montreal on Friday and Saturday (15-16 September) to present a united front against the United States on climate action.

The US was represented at the meeting by an observer who, according to EU Climate Commissioner Miguel Arias Cañete, said “[the US] will not renegotiate the Paris accord but they will try to review the terms on which they could be engaged under this agreement.”

This was quickly refuted by a White House spokesperson on Saturday, who insisted that President Donald Trump’s decision to withdraw the US from the international agreement still stands.

Our position on the Paris agreement has not changed. @POTUS has been clear, US withdrawing unless we get pro-America terms.

But there was more confusion on Sunday, when US Secretary of State Rex Tillerson told American television that Trump is actually open to staying in the agreement under the right conditions.

“The president said he is open to finding those conditions where we can remain engaged with others on what we all agree is still a challenging issue,” Tillerson told CBS News. He added that the terms should reflect the US economy’s needs in relation to China’s in particular.

EU climate boss Cañete also told reporters that there would be a meeting with senior US officials on the sidelines of the UN Assembly “to assess what is the real US position”, adding that “it’s a message which is quite different to the one we heard from President Trump in the past.”

Despite Trump’s 1 June speech signalling his intention to leave the accord, 4 November 2020 is the earliest date the US can actually exit under the terms of the deal. Other countries are concerned that the US will, as a result, look to influence and water down the agreement from within.

At the first Ministerial Meeting on Climate Change (MMCA), Canadian Minister of Climate Change and Environment Catherine McKenna said that co-hosts Canada, China and the EU, as well as other countries in attendance, agreed the “agreement is irreversible and non-negotiable. We are also in full agreement on the full implementation [of the deal].”

Cañete, echoing European Commission boss Jean-Claude Juncker’s State of the Union address, added that “with the collapse of ambition in the United States, Europe will ensure we make our planet great again. Our ambitious climate policy agenda has the most important backing of all.” 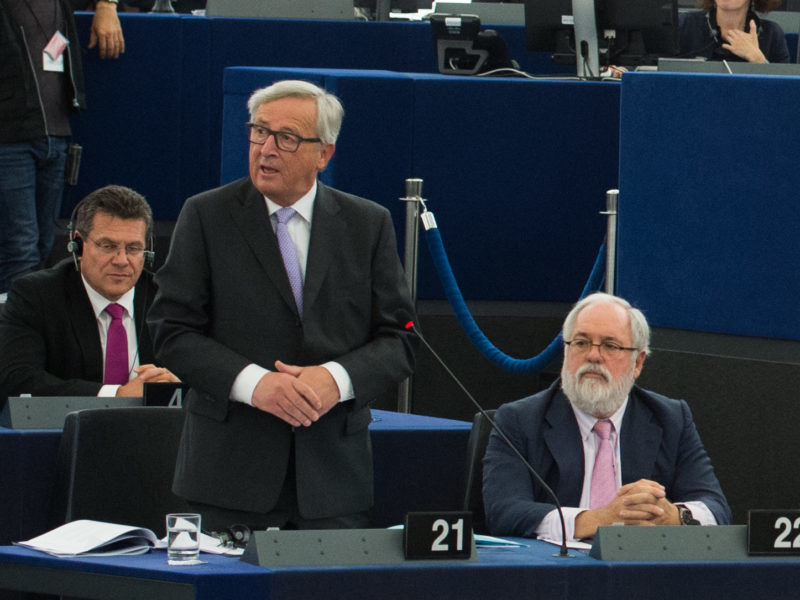 The meeting took place 30 years to the day since the signing of the Montreal Protocol on protecting the ozone layer, an agreement which has been hailed as the most successful environmental accord in history.

Xie Zhenhua, China’s Special Representative on Climate Change, called the protocol “very effective and efficient” and called on all parties to the Paris deal to decide “how we should combine climate actions with economic growth, the protection of people and job creation.”

China turned up at the meeting in the wake of making public its plan to ban the internal combustion engine, which sent shockwaves through the automobile industry.

A former senior executive of US firm Chrysler told The Economist that “if China says no more fossil-fuelled cars, global carmakers must follow”, in order to keep a slice of the largest car market in the world.

The EU is hoping to make its own impact on the same sector with an upcoming proposal on cutting transport emissions. It was the only tangible environmental measure cited by Juncker in Strasbourg last week, among a raft of migration and institutional reform proposals.