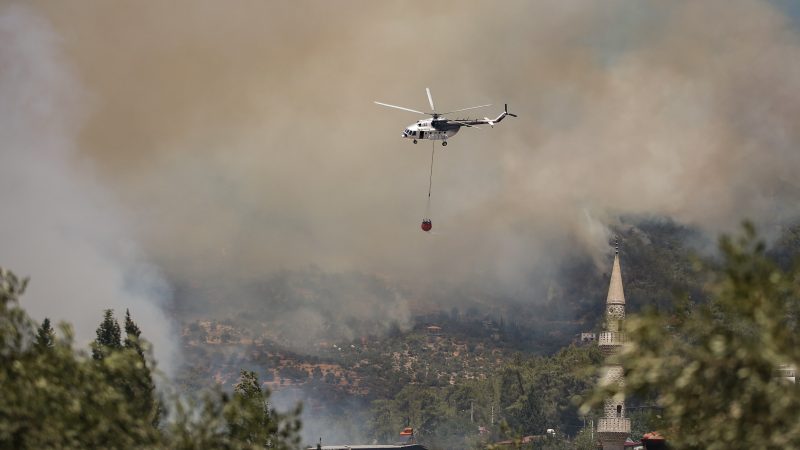 A helicopter waterbombs a wildfire burning at the Cokertme village of Milas district of Mugla, Turkey, 02 August 2021. [EPA-EFE / ERDEM SAHIN]

More than 170 wildfires have scorched swathes of Turkey’s southern coast and killed eight people since breaking out east of the Mediterranean vacation hotspot Antalya last Wednesday and then spreading west.

The blazes have destroyed pristine forests and thousands of cattle.

Their location around Turkey’s main vacation destinations have also dented government hopes of a tourist-driven revival of the fragile economy.

The European Union’s satellite monitoring service said their “radiative power” — a measure of the fires’ intensity — “has reached unprecedented values in the entire dataset, which goes back to 2003”.

The Turkish government appears to have been rattled by the scale and ferocity of the flames.

Its media watchdog on Tuesday warned broadcasters that they may be fined if they continue showing live footage of the blazes or air images of screaming people running for their lives.

Erdogan himself has been subjected to days of ridicule on social media for tossing out bags of tea while touring one of the affected regions under heavy police escort.

The opposition further accuses the powerful Turkish leader of being too slow to accept offers of foreign assistance — including from regional rival Greece — and failing to properly maintain firefighting planes.

Erdogan prepared to mount a political counterattack in a national television interview scheduled for Wednesday night.

Much of the latest public fear and anger has been directed at a fire that has been threatening the hills around a power plant in the Aegean Sea holiday resort town of Milas.

An AFP team in Milas saw Turkish workers dig trenches around the plant to keep the flames away.

Turkish helicopters and two firefighting planes from Spain dumped sea water and fire retardant on the surrounding hills and rows of scorched or burning residential buildings.

A group of locals watched the battle unfold from the relative safety of the beach.

Most of the flames appeared to have been extinguished and only white plumes of smoke rose from the back of the hills on Wednesday afternoon.

“The local security forced asked us to evacuate the village but we never left. We stayed where we were,” a local electrician who agreed to be identified only as Ersoy told AFP.

“I did not think of running away. Had I thought of fleeing, there would be nobody to put out or contain the fire,” he said.

The main opposition party in control of the local mayor’s office said hydrogen tanks used to cool the plant had been emptied and filled with water as a precaution.

Erdogan’s office blamed the very first blazes near Antalya on arsonists that pro-government media linked to banned Kurdish militants waging a decades-long insurgency against the state.

But more and more public officials now link them to an extreme heatwave that has dried up water reservoirs and created tinderbox conditions across much of Turkey’s south.

Experts warn that climate change in countries such as Turkey increases both the frequency and intensity of wildfires.

“We are fighting a very serious war,” the minister told reporters. “We need to keep our morale and motivation high in this war. I urge everyone to be patient.”