The 'Tinsley Towers' or 'The Salt and Pepper Pots' are being demolished, Sheffield, Britain, on 24 August 2008. [EPA/LINDSEY PARNABY]

The UK’s CO2 emissions fell by another 2.9% in 2019, bringing the total reduction in the past decade to 28%, even as the British economy grew by a fifth, according to fresh data published on Tuesday (3 March).

Falling coal emissions account for around three-fifths of the overall reduction in the UK’s CO2 output over the past decade, with gas accounting for another third and oil making up the remainder, according to new research by Carbon Brief, a climate analysis and news website.

Overall, the UK’s CO2 emissions are now down to levels not seen since 1888, excluding years with general strikes, Carbon Brief said. 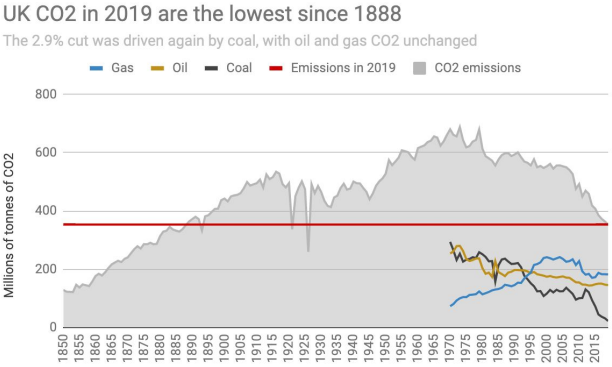 The largest contributor to falling emissions were improvements in energy intensity – or the amount of energy needed to produce each unit of GDP. “Broadly speaking, this reflects the fact that the UK has become much more energy efficient,” Carbon Brief said.

The second-largest contributor has been a shift to cleaner fuels, primarily renewable sources of electricity.

“Together, these effects have more than offset the impact of rising population and GDP,” Carbon Brief noted. 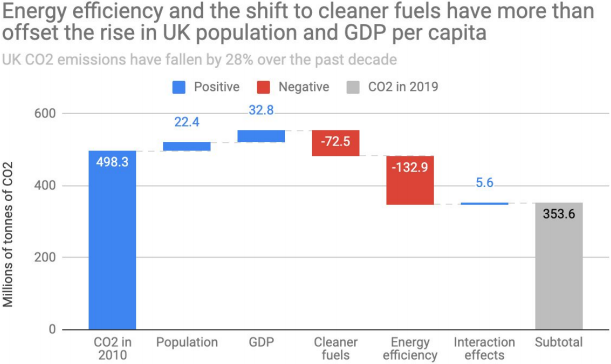 “The UK’s success in cutting emissions over the past decade has come overwhelmingly in the power sector, where a combination of falling demand, carbon pricing, an ageing coal fleet, EU pollution rules, the coal phase-out deadline and support for renewables has pushed coal off the system,” said Simon Evans, deputy editor at Carbon Brief.

Evans said other countries could replicate “some parts” of the UK’s recipe for success. But he also cautioned against jumping to conclusions, in particular when it comes to Britain’s coal-to-gas switch, which is often credited for the falling emissions.

“Coal has been displaced by falling demand and renewables,” Evans told EURACTIV in emailed comments. Contrary to wide public perception, UK electricity generation from gas has fallen over the past decade, he pointed out.

Domestic demand for gas has also declined over the past decade, thanks to improvements in energy efficiency, mainly boiler regulations and insulation, Evans continued.

“It’s important not to overemphasise UK progress, which has been extremely limited in terms of emissions from homes, transport or agriculture,” he cautioned.

In Europe, emissions from the power sector are also down, mainly due to falling coal output, recent figures show. Around half the fall in coal reflects the impact of new wind and solar while the other half is due to a switch from coal to gas, according to data on European power sector emissions by climate think tanks Agora Energiewende and Sandbag.