Drax power station in North Yorkshire UK is the single largest emitter of carbon dioxide in the UK. [Les Haines/Flickr]

The UK recorded the largest decrease in greenhouse gas emissions in the European Union in 2015, although new research has found the emissions from the bloc increased for the first time in five years. EURACTIV’s media partner edie.net reports.

Analysis published by the European Environment Agency (EEA) found that EU emissions increased by 0.5% in 2015, largely driven by heat demand due to a colder winter and an increase in road transport.

Despite the increase, the UK recorded the largest decline in emissions amongst the Member States. Both the UK and Germany have accounted for 48% of the total reduction in EU emissions over the last 25 years. For 2015, the UK reduced emissions by more than 19,400kt of CO2 equivalent, a 3.7% decrease, more than the combined reductions of the eight other nations that recorded a decrease in emissions in 2015.

Lower emissions in the UK were attributed to the “liberalising of energy markets” and the switch from oil and coal to gas in electricity production. In fact, the UK’s electricity and heat production represents the largest emissions reduction across the bloc, accounting for 7.5% of the overall reductions.

The EU recorded a 4% decline in emissions in 2014. However, 19 Member States saw emissions increase in 2015, with Spain, Italy and Netherlands accounting for the largest increases. Rising emissions in these countries were triggered by “substantial” increases in coal generation and the use of gas in the residential sector. 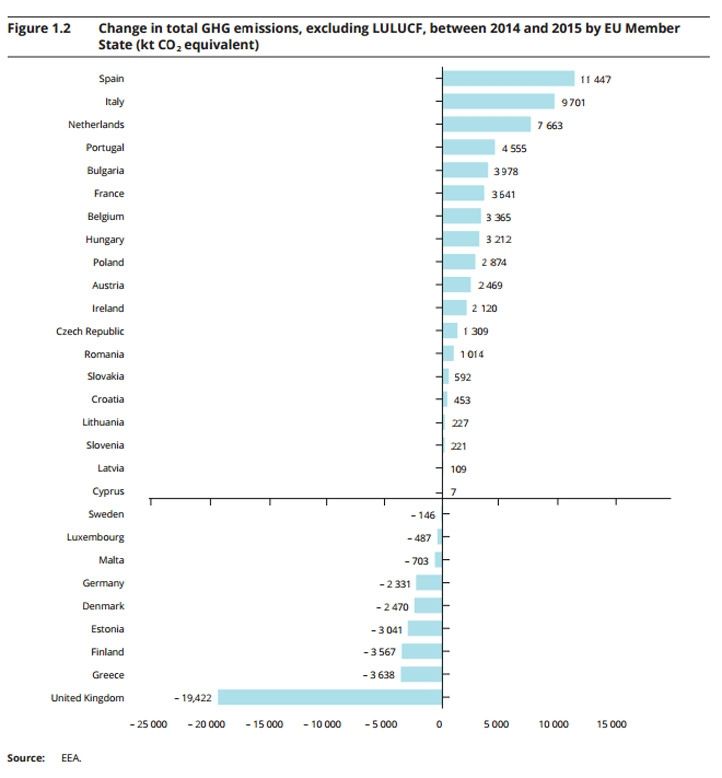 The EU recorded a 4% decline in emissions in 2014. However, 19 member states saw emissions increase in 2015, with Spain, Italy and Netherlands accounting for the largest increases. [EEA]

It is believed that many of the EU’s legislative energy frameworks will be transposed into UK law during the Brexit negotiations. Former energy minster Andrea Leadsom claimed that energy policies wouldn’t be changed. But with the UK struggling to reach targets for transport and heat, concerns have been raised that legislation could be watered-down.

The poor performances found in the heat and transport sectors across the EU can also be found in the UK. The nation is not even halfway towards achieving the target of 12% of energy needs for heat generation coming from renewable sources, while the proportion of renewable energy used in transport has in fact fallen, from 4.9% to 4.2% over the past year.

Across the EU, all increases in transport emissions, which is responsible for around 20% of total EU emissions, were “fully accounted for” by diesel consumption. International aviation is not included in national totals under the Kyoto Protocol. However, data from EEA suggests that emissions from aviation increased by 3.3% in 2015.

Germany’s Öko-Institut warned the EU must cut global warming transport emissions by 94% by 2050 to stop the planet’s temperature rising above the two degree limit agreed by world leaders at the Paris climate summit in December 2015.

The UK accounts for around 12% of the EU’s emissions, and the Office for National Statistics (ONS) revealed earlier this year that “basket emissions” – the seven greenhouse gases listed under the Kyoto Protocol – in the UK had fallen by 3.8% in 2015.

The decline has been generated while the UK economy continues to grow. A report by the Energy and Climate Intelligence Unit (ECIU) found that the UK has been more successful than any other G7 nation at decoupling emissions growth from that of the economy over the past 25 years.

The Word Resources Institute (WRI) also found that between 2000 and 2014, the UK achieved six years of “absolute decoupling”, where real GDP grew as carbon emissions declined. According to the analysis, the UK achieved an overall GDP growth of 27% along with a 20% cutback in CO2 emissions over the 14-year period.

The latest EEA figures reveal that the EU’s economy grew by more than 2% in 2015, the strongest annual economic growth since 2007, and could account for the increase in transport demand.