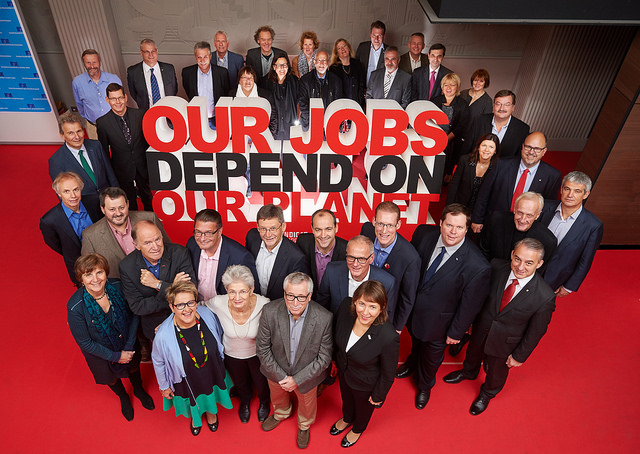 Trade union leaders on Friday (2 October) called for workers in regions dependent on carbon intensive industries to be given financial and other support to help them find new jobs.

Employees in polluting industries face an uncertain future as the European Union shifts to a low-carbon economy.

While recognising the need for action to fight climate change, meeting in Paris, unions demanded that Europe worked towards “a just transition towards a sustainable green economy, creating quality jobs and driving investment towards low-carbon technologies and infrastructures”.

The “just transition” describes a fair way of ensuring workers are not left behind by climate action. “Trade unions are making a clear statement on behalf of workers on the world’s gravest environmental and economic threat,” said Bernadette Ségol, general secretary of the European Trade Union Confederation (ETUC).

National trade unions met in the French capital for the Congress of the European Trade Union Confederation (ETUC). Paris will be the venue for COP21, the UN Climate Change Conference, on 30 November, where world leaders will attempt to limit global warming to no more than two degrees above pre-industrial levels.

“Financial support for regions and sectors which depend on carbon-intensive activities will be essential to implementing a just transition in Europe,” an ETUC manifesto backed in a vote today reads.

“The impact of the energy transition on these regions and sectors should be better assessed and taken into account.”

The ETUC is running a project looking at certain regions and the challenges they will face in moving to a low-carbon economy. They include Yorkshire (UK), Nord Rhein Westfalia (Germany), Silesia (Poland),Asturias (Spain), Antwerp (Belgium), Lulea (Sweden) and Maritza (Bulgaria).

The European Commission told EURACTIV that over 2014-2020, €38 billion from the European Regional Development Fund will be invested in the support to the low-carbon economy. The €38 billion is twice the amount spent on the area in the previous programming round,

Markku Markkula, President of the European Committee of the Regions, told EURACTIV, “Creating a low-carbon European economy is impossible without a technological transformation, but this means supporting those regions and cities long-reliant on carbon. Investment must drive this transition by focusing on alternative forms of energy, increasing knowledge-sharing and boosting innovation locally.”

The coal industry employs 240,000 workers in Europe, with many of them concentrated in particular regions. It provides work for many more through services, Magdalena Chawu?a-Kosuri, Deputy Secretary General of the European Association on Coal and Lignite (Euracoal), said.

In Poland alone, 90,000 people work in mining, many in the south. Silesia is one of the most developed regions in Poland, but that could change if the transition was badly handled, she added.

“If this sector collapses it will create huge regional problems,” said Chawu?a-Kosuri.

Euracoal is talking to the European Commission about using EU Social Fund money to retrain workers. It said a clear, transparent plan on how to manage the transition was needed.

“We need a transparent plan that will have in mind emissions reduction but be more structured and create certainty for people,” said Chawu?a-Kosuri.

Sanjeev Kumar is founder of Change Partnership, a climate change NGO. He welcomed the call by the unions.

“Not one worker or region should be sacrificed to the altar of climate action,” he told EURACTIV.

Just transition funds should give money to affected workers, according to Kumar. But they should also get involved in regional investment.

Regions should come forward, identify the problem, design the solutions, and be accountable for their successful implementation.

A just transition had to be programmed into the EU’s Emissions Trading System (ETS), Kumar said, because it is the biggest driver for carbon mitigation which means industrial transformation in Europe.

The ETS is the world’s biggest scheme for trading emissions allowances. Regulated businesses measure and report their carbon emissions, handing in one allowance for each tonne they release. Permits can be traded on the markets as an incentive for companies to reduce emissions.