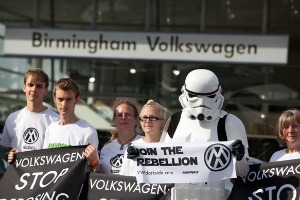 Volkswagen has stunned Brussels by reconsidering its fierce opposition to EU automobile emissions targets, and promising to reduce its carbon emissions to 120 grams of CO2 per kilometre by 2015, a full 10 grams below the EU’s target.

The German car company yesterday (6 March) announced a “fundamental ecological restructuring” that would reduce its carbon dioxide emissions by 30% in the 2006-2015 period.

“Every new model generation will on average be 10% to 15% more efficient than its predecessor,” a company statement said.

More than two thirds of Volkswagen’s €62.4 billion investments between now and 2016 will be spent on more efficient vehicles, the statement added.

"We welcome that more and more car manufacturers are announcing that they will overachieve the 2015 target and hope that manufacturers will continue their CO2-reduction efforts with a view to meeting the 2020 target of 95 grams per kilometre,” Isaac Valero Ladron, an EU Climate Action spokesman,  told EURACTIV.

The news came as a shock, because Volkswagen had previously lobbied so strongly against EU standards that the environmental group Greenpeace slammed it as Europe’s dirtiest carmaker, and launched a 'Star Wars'-themed campaign against its stance.

A VW lobby brief to the EU in June 2010, which EURACTIV has seen, stated that future CO2 reduction targets "will definitely not be met through energy-efficiency measures taken on the vehicle alone.”

The brief described the EU’s proposed 95 grams target for 2020 as “not based on sound impact assessment, nor on a realistic appreciation of the costs and technical progress necessary to meet the goal within the timescale.”

“They cried wolf and got the EU to set a standard that is far too conservative,” she said. “Faced with intense public pressure, they have now conceded that they can make cleaner cars at a much faster pace.”

In 2007, Volswagen argued that achieving the 120 grams target by 2012 was technically impossible and would cause a massive jobs hemorrhage.

“EU politicians should be mindful not to make the same mistake when they review car emission standards for 2020 this year, or they will end up with a target that is obsolete even before it comes into force,” she said.

Volkswagen’s green revamp came as a new report by the analysts JATO Dynamics revealed that emissions from all new cars in the EU fell by 3.4% last year to 136 grams per kilometre.

The emissions average for Europe’s new car fleet in 2010 had been around 141 grams per kilometre, but if 2011's reductions are confirmed by official EU figures later this year, the EU will be well on track to meeting its 130 grams per kilometre target for 2015.

Sigrid de Vries, a spokeswoman for the European Automobile Manufacturers Association, denied claims by environmentalists that this showed the 2015 targets were obsolete and in need of tightening.

“We’re not in 2015, it is a challenging target and that doesn’t change,” de Vries told EURACTIV.

“You will see improvements with each new model in the coming years because manufacturers are making good progress but it is too early to tell the outcome so saying the targets are obsolete is absolute nonsense.”

In 2007, the EU proposed legislation setting emission performance standards for new cars, which was adopted in 2009 by the European Parliament and the Council. Today it is the cornerstone of the EU's strategy to improve the fuel economy of cars and ensure that average emissions from new passenger cars in the EU do not exceed 120 grams CO2/km.

The much-anticipated White Paper on Transport, presented by the Commission in February 2011, flagged measures to raise the €1.8 trillion which the EU says is needed for infrastructure investment in the next 20 years to build a competitive transport system that will increase mobility, remove major barriers in key areas and fuel growth and employment.

At the same time, the Commission said its proposals will dramatically reduce Europe's dependence on imported oil and cut carbon emissions in transport by 60% by 2050.