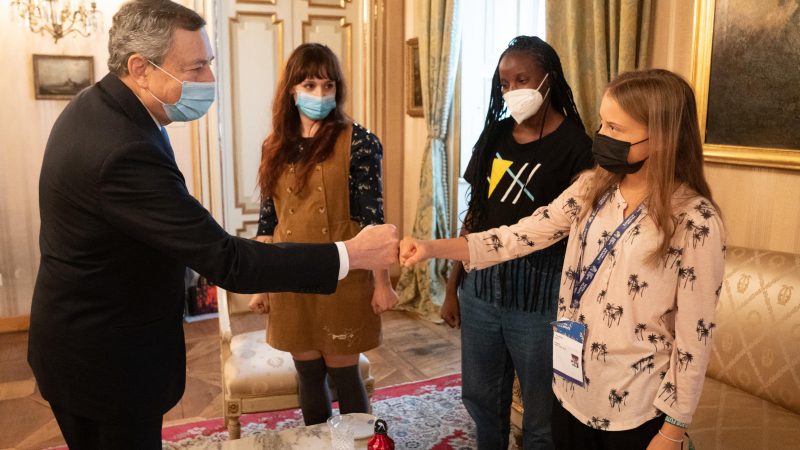 Italian Prime Minister Mario Draghi pledged on Thursday (30 September) that world leaders would listen to the demands of young climate activists ahead of the United Nations COP26 summit in November, after a meeting in Milan with Greta Thunberg.

Their proposals include a transparent climate finance system, sustainable and responsible tourism and the phasing out of the fossil fuel industry by 2030, which they want included in the agenda for the COP26 meeting in Glasgow, Scotland.

Activists from around the world converged on Milan this week for a Youth4Climate event addressed by Draghi and his British counterpart Boris Johnson along with Britain’s COP26 president Alok Sharma, who is coordinating preparations for the summit.

“You are right to demand accountability and change … your mobilisation has been powerful and rest assured, we are listening,” Draghi said after a private meeting with Thunberg and other activists.

Draghi wants the G20 summit in October to make a commitment to keep a 1.5 degrees Celsius global warming limit within reach and develop long-term strategies in line with that goal. 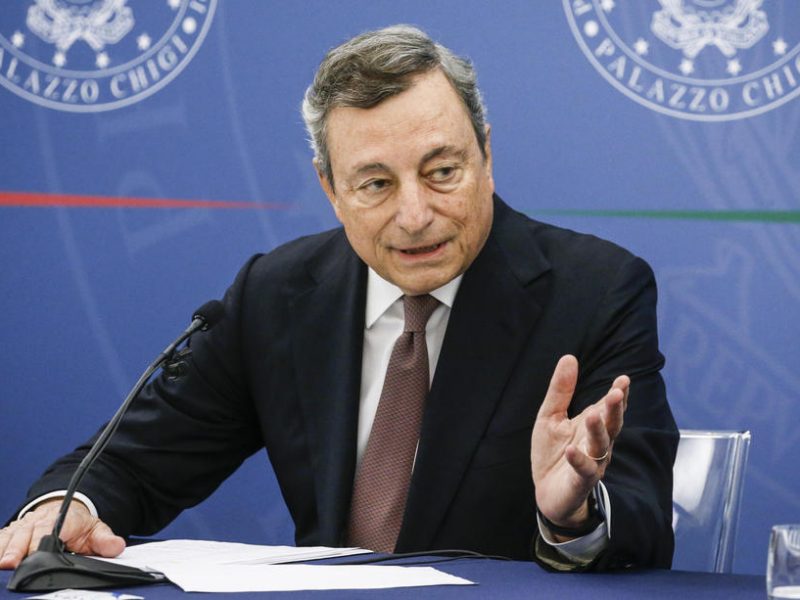 How Italy can charm China into global climate action

Mario Draghi can use his role at the helm of the G20 to persuade China to sign up to global climate targets, argue Luca Bergamaschi and Bernice Lee.

“My sense is that leaders are all absolutely convinced of the need to act and act fast,” he said.

Draghi promised activists he would push at the G20 summit to accelerate a $100-billion pledge to help vulnerable countries adapt and transition to cleaner energy.

“The premier agreed with us, but that is not enough. We want to see action,” Martina Comparelli, an Italian activist, who was part of the Draghi meeting, said.

Draghi’s speech was interrupted by chanting, while outside the venue some activists tried briefly to block the road and scuffled with riot police.

Speaking by video link Johnson said young people had every right to protest and were paying the price for the reckless actions of their elders. “Your future is literally being stolen before your eyes,” he said.

He said if inroads could be made into phasing out coal and the combustion engine, raising funds and planting trillions of trees then COP26 could be “the beginning of the end of climate change.”

Italy and Britain are co-hosting COP26, which aims to secure more ambitious climate action from the nearly 200 countries that signed the 2015 Paris Agreement and agreed to try to limit human-caused global warming to 1.5 degrees Celsius.

The young climate champions are demanding policymakers match rhetoric with action and stump up the billions of dollars needed to wean the world off fossil fuels to cleaner energy during a year that has seen record-breaking heatwaves, floods and fires.

Their proposals from Milan will be vetted by climate and energy ministers at the pre-COP26 gathering over the next few days.

Draghi urged all wealthy nations who pledged a decade ago to mobilize $100 billion a year to fulfil that promise, adding the aid should come in grants, not loans, to avoid hiking debt.

Italy’s energy transition minister later said he would propose a doubling of its contribution to climate financing to 1 billion euros a year, subject to government approval.

While new energy and funding pledges from the United States and China have left negotiators more upbeat, many G20 countries, including major polluters like China and India, are yet to deliver updates of their short-term climate action plans.

“You (youth) have to light up the social media to be sure we are pushing other countries to do more than they’ve been doing,” US climate envoy John Kerry said. “We have a wall of resistance before us and we need to pull it down.”