"In order to contain the rise in temperatures to 1.5°C by the end of the century, a reduction of at least 65% would have to be achieved, according to the latest available data," wrote Clément Sénéchal of Greenpeace France in a press release. [Source: EC - Audiovisual Service]

“For us, the 2030 target is ambitious, it’s achievable and it is beneficial for Europe,” von der Leyen said as she unveiled the EU’s new climate proposals before the European Parliament in her first State of the Union address since she became Commission President in 2019.

“We can do it!” she said, borrowing a famous phrase used by German Chancellor Angela Merkel during the height of the 2015 migration crisis.

“Our impact assessment clearly shows that our economy and industry can manage this,” she continued, saying EU countries have already managed to reduce emissions by 25% since 1990 while growing the economy by more than 60%.

The difference today, she said, is that Europe now has the technology, the expertise and the financial firepower necessary to make it happen, with a €1.8 trillion EU budget and recovery fund that was agreed by EU leaders in July for the years 2021-2027.

“We are world leaders in green finance and we are the largest issuer of green bonds worldwide,” von der Leyen pointed out, announcing that 30% of the EU’s €750 billion recovery fund will be raised through green bonds.

“We have it all. Now it’s our responsibility to implement it and to make it happen,” she added, telling Parliamentarians: “This is our mission”.

The announcement on the EU’s new 2030 climate target was widely expected after reports emerged last week that the Commission President would announce them in her speech.

A leaked policy document, published by EURACTIV earlier this week, shows new measures at EU level will span every sector of the economy, ranging from agriculture to energy and transport. The proposal will be officially unveiled on Thursday (17 September) with a view to adopting the 55% target proposal before the end of the year.

But meeting the 55% goal also represents “a significant investment challenge,” the Commission warns in the draft document, saying investments in clean energy will have to increase by “around €350 billion per year” in order to achieve the new 2030 objective.

And while many business groups are supportive of the new 55% emissions goal, others are more guarded about raising the bloc’s climate ambitions.

In July, a group of six Eastern EU countries wrote a letter to the Commission, calling on the EU executive to propose “realistic” climate goals that take into account “the real social, environmental and economic costs” of the transition.

Von der Leyen acknowledged those concerns, saying: “I recognise that this increase from 40 to 55 is too much for some and not enough for others. But our impact assessment clearly shows that our economy and industry can manage this,” she told MEPs.

“Meeting this new target will reduce our energy import dependency, will create millions of extra jobs and more than halve air pollution,” von der Leyen argued, announcing a root-and-branch review of EU climate and energy legislation “by next summer” with a view to aligning EU laws with the new 55% goal.

This will include a revision of directives on renewables, energy efficiency, as well as a reform of the energy taxation directive and the bloc’s carbon market, the Emissions Trading Scheme. 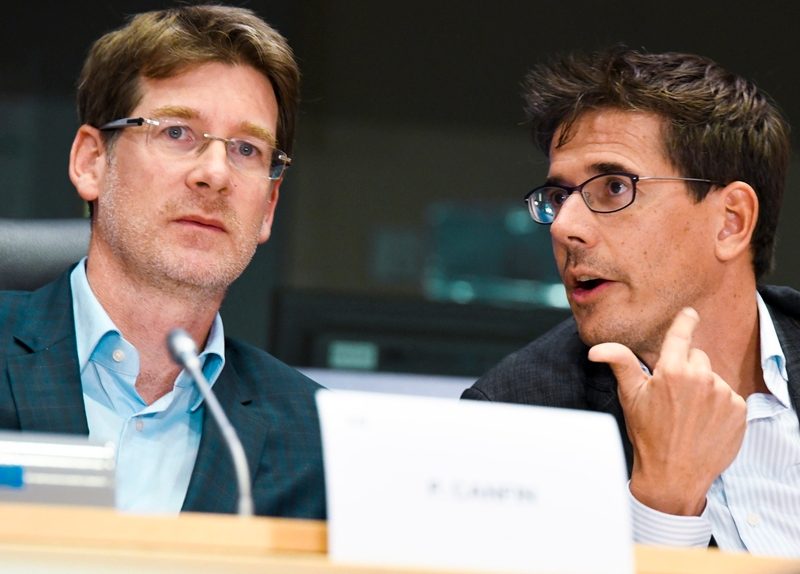 The European Commission has a unique opportunity to issue green bonds to finance the EU’s coronavirus recovery plan and ensure overall investment coherence with the Green Deal, write Pascal Canfin and Bas Eickhout.

“We know that the construction sector can even be turned from a carbon source into a carbon sink if organic materials like wood and smart technologies like AI are being used,” said the former German defence minister.

“We need to give our systemic change its own distinct aesthetics to match style with sustainability,” von der Leyen said, announcing the creation of “a new European Bauhaus” where architects, artists, students, engineers, designers, will work together to give the European Green Deal a distinctive look and feel.