During the meeting, Merkel stressed that as a physicist, she is aware of the demands of science, but as a politician, she must "take into account the complexity of the situation". But Germany's head of state confirmed she is prepared to push climate protection forward during her Germany's EU Presidency. EPA-EFE/Steffen Kugler HANDOUT HANDOUT EDITORIAL USE ONLY/NO SALES [EPA-EFE/Steffen Kugler]

“We demand that the Paris climate agreement be translated into concrete political measures now,” said German activist Luisa Neubauer after the meeting. “It’s all about clear targets and precise figures,” said the activist, adding that “for this we need action, not just nice words.”

Swedish activist Greta Thunberg maintained that “everyone has a responsibility, everyone can break the vicious circle in which one person blames the other”.

According to Belgian FFF activist Adélaïde Charlier, it is necessary to “bridge the huge gap between what science says and what is actually happening.”

Greta Thunberg, Luisa Neubauer, as well as Adélaïde Charlier and Anuna de Wever from Belgium spoke to the German chancellor for 90 minutes. They said the atmosphere of the meeting was friendly, but added that “we are approaching the situation from different angles”.

During the meeting, Merkel stressed that as a physicist, she is aware of the demands of science, but as a politician, she must “take into account the complexity of the situation”. But Germany’s head of state confirmed she is prepared to push climate protection forward during her country’s EU presidency.

Because Germany has an “enormous responsibility, we wanted to make sure it is taking the [climate] issues very seriously,” de Wever explained. “Angela Merkel seems to be aware of this,” agreed Luisa Neubauer.

The chancellor, who will step down at the end of 2021, and the four activists “agreed that global warming is a global challenge and that the industrialised countries bear a particular responsibility in the fight against it,” said German government spokesman Steffen Seibert after the meeting.

He pointed out that the European objective of achieving carbon neutrality by 2050, as well as a more ambitious CO2 reduction target for 2030, were the main issues discussed at the meeting.

Merkel and the activists also exchanged views on the controversial EU-Mercosur free trade agreement between the EU and Latin America, which environmentalists fear will fuel further destruction of tropical forests. De Wever said she was “happy” that Merkel had expressed her opposition to the agreement. 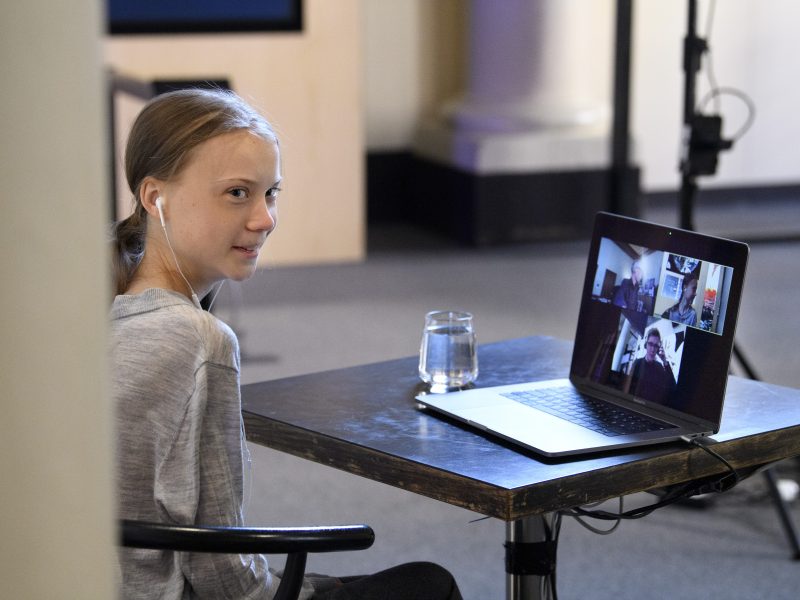 Countries have a chance to choose a new path as societies begin to return to normal after lockdowns imposed to prevent the spread of the coronavirus, activist Greta Thunberg told an Earth Day event on Wednesday (22 April).

This meeting comes two years after Greta Thunberg, who was 15 years old at the time, began demonstrating in front of the Swedish parliament.

Her commitment has since spread to many countries and grown into a movement called “Fridays for future,” which consists of weekly demonstrations.

“We have lost another two crucial years because of political inaction,” despite the protests, the activists lamented in an op-ed calling on countries to stop investing in fossil fuels published the previous day in The Guardian.

In fact, the G20 countries have pledged $151 billion of public money for fossil fuels, representing 56% of the energy component of their post-COVID-19 economic stimulus package.

In addition, new coal-fired power stations with a capacity of 92 GW have been built, which is almost equivalent to the UK’s total installed power generation capacity. On top of that, each year the world emits 4% more CO2 than in 2015, when the Paris agreement was signed.