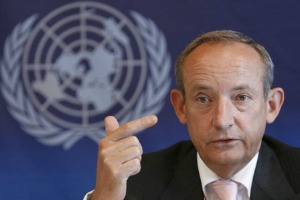 EXCLUSIVE / Urgent action is needed to boost carbon prices to €150 per tonne – 2,250% higher than current levels – if the EU is to meet its decarbonisation goals by 2050, the former secretary-general of the UNFCCC has told EURACTIV in an interview.

“We very quickly need to see a carbon price in the order of €150 a tonne because that’s the kind of level that drives the price signals that we really need,” Yvo de Boer said on a phone line from Manila, in the Philippines.

EU carbon allowances are currently trading at €6.60 per tonne, but a price of around €150 a tonne is often quoted as the minimum needed to incentivise investments in technologies such as carbon capture and storage.

“Given that we do not have climate change under control – and keeping long-term temperature increases below 2 degrees Centigrade has become an almost impossible challenge – the choice we face is to spend massive amounts of money on adapting to the impacts of climate change or spending significantly smaller amounts on reducing greenhouse gas emissions now,” De Boer added.

A universal failure to price emissions correctly had led him to advocate tackling the issue ‘head on’, he explained.

Without the vision provided by an ambitious and clear route to the EU’s 2050 goal of reducing CO2 emissions by at least 80% on 1990 levels, “you get lost in the fog,” said de Boer, who now works as a climate adviser for the KPMG group of auditors.

The EU’s carbon price has fallen through the floor due to an economic crisis that has slashed demand, and uncertainty over long term investment signals.

Last month, Brussels announced plans to address the issue by staggering the issue of 900 million carbon allowances in the 2013-2020 period. But after an initial boost, prices quickly fell back.

The structural report accompanying the proposal outlined other options to hike the carbon price including increasing the EU’s 2020 emissions reduction target, a permanent cancellation of allowance issues, or decreasing free allocations.

These options have now gone out for stakeholder consultations, although they could be affected by what de Boer called the “minor obstacles” of economic, financial and eurozone crisis.

Political hurdles also stand in the way of accelerated climate action. In the period between June 2011 and June 2012, Poland used a veto to stymie EU climate policies three times.

While the legality of this has been challenged, EU officials privately describe the Polish veto as a matter that will have to be addressed at the political level.

But de Boer said that Warsaw could be nudged towards a decarbonisation agenda by global carbon pricing and investment in innovation.

“My strong feeling is that if a significant part of EU funding can be used to help Poland make the transition to a more sustainable energy mix, that that will be money well spent – both environmentally and politically,” he said.

With a turnover of some €90 billion in 2010, the EU's Emissions Trading System is the world's largest carbon market. Around 80% of it is traded in futures markets and 20% in spot markets.

At its inception, a price of about €30 per tonne of carbon was expected to incentivise emissions reduction and some low carbon investments. But as recession knocked the carbon price down to €6 per tonne, Poland blocked efforts at remedial action, claiming that the economic downturn had already done enough to meet the 2020 emissions reduction target.