Zombie carbon markets to be shocked back to life 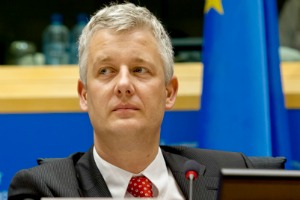 A patched-up plan to shock Europe’s zombie carbon markets back to life will pass a plenary vote at the European Parliament on Wednesday (3 July), but this will only "buy time" for more fundamental reform, says the chairman of the Parliament’s environment committee.

“The indications are that we will win,” said German MEP Matthias Groote (Socialists and Democrats). “The proposal will be going through.”

“But backloading is only an instrument to buy the necessary time to maintain the Emissions Trading System (ETS) as we need structural reform,” he added. “If the carbon price falls below €3 a tonne, it will have no more effect.”

The EU’s original proposal to ‘backload’ or temporarily withhold 900-million carbon allowances in a bid to raise prices, was defeated in a European Parliament plenary vote in April.

>> Read: Backloading amendment to return for ‘second round’

Since then, MEPs from the centre-right EPP, liberal ALDE and the S&D groups have thrashed out a series of compromises to soften the plan's impact on heavy industrial users of energy such as the steel or chemicals sector. These include:

Groote insisted that the proposal would still raise carbon prices – though “not dramatically” – and denied that the heavy industry fund was a fossil fuel subsidy in disguise.

“It is a compromise,” he said. “I am in favour of set-asides [the permanent deletion of excess allowances] and [the proposal] is not 100% my wish, but we need a majority.”

The carbon leakage measure could be voted on separately, he added.

If the proposal was passed, negotiations between the European Council, Commission and Parliament could begin after – or during – the summer break, Groote said. If it was defeated this time, “then it is dead,” he added.

A separate report by the environmental group Sandbag recently found that, because of over-allocation of allowances, the ETS will now drive ‘less than zero abatement’ from 2008-2020 and threatens to cancel out nearly 700 million tonnes of carbon abatement delivered by other EU climate policies.