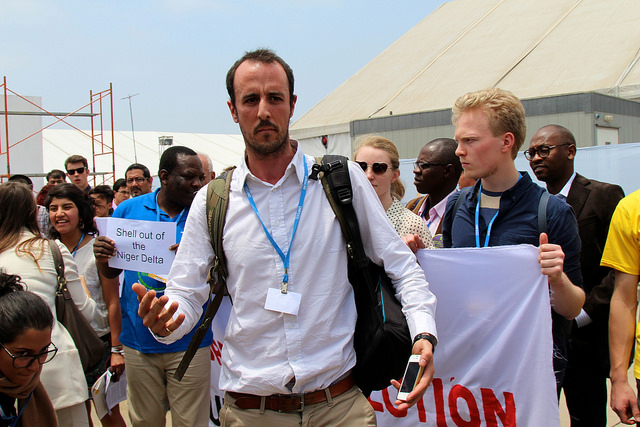 Privileged accesse to politicians enjoyed by big business should not be tolerated, writes Pascoe Sabido. François Hollande and his government should lead by example, refusing any interaction with dirty industries.

Pascoe Sabido is a campaigner for Corporate Europe Observatory.

The French governerment wants 20% of the cost for organising this year’s historic UN climate conferce in Paris to be financed by the private sector. Paris has estimated the total budget for the organisation of the COP21 (venues, security, communication etc) at €187 million.

To help foot the bill, dirty energy companies, lobbyists against energy transition, and some of the worst greenwashers have stepped forward. But how many massive multinational companies spend money without expecting a return on investment? None.

Giving the stage to big business to present their own climate spin is further strengthening the stranglehold of major corporations over the management of yet another COP, and what form tackling climate change takes. It doesn’t have to be this way.

In November 2014, the French Senate cut the public budget for the organisation of COP21. The French government then turned to the private sector to make up the shortfall. There were many reassurances to civil society groups that the same mistakes that were made in Warsaw in 2013 would not be made again.

Back then, some of the biggest polluters from the oil, gas and coal industries were all able to wrap themselves in the colours of the UN – a practice known as bluewashing – and claim to be in favour of tackling climate change.

While a full list of sponsors for COP21 was promised from French officials at the end of March, it is still not available. However, it was recently revealed that the first sponsors of the talks will be Suez Environment, a key member of the French pro-fracking lobby, and luxury brand Luis Vuitton (LVMH). Others were initially announced – BMW, Vattenfall and New Holland Agriculture – but later denied by the COP21 organisers. All have appalling climate change records.

Unrepudiated sponsors of the official talks, Suez environment and LVMH similalry fail to meet the criteria that could be reasonably considered to be consistent with the fight against climate change. Suez Environment is France’s second largest provider of environmental services (mainly water and waste).

In the 1990s, the company was at the forefront of a market offensive by big French water companies in Asia, Africa and Latin America.

Suez just recently won over €400 million in compensation in an investor state dispute settlement case it took against Argentinian capital Buenos Aires after the city took control of its water services in 2006.

Suez Environment also did not hesitate to jump on recent privatizations in Greece and has positioned itself as a world leader in the treatment of polluted water from coal mining and shale gas. It is also among the French companies lobbying for shale gas as part of the Centre for Non-conventional Hydrocarbons. While Suez environment is not directly involved in fossil fuel extraction (unlike GDF-Suez, which owns 34% of Suez Environment), it operates as a service provider for the treatment of water polluted by these processes. In doing so, it validates activities which are extremely harmful to the environment and the climate.

LVMH is not a fossil fuel producer and has no direct interest in the sector to our knowledge. However, it is a champion of tax evasion, with more than 200 subsidiaries in tax havens.

This allows the company to avoid paying their fair share towards the energy transition we need to make if we’re going to tackle climate change. While it’s not in the business of climate destruction, that does not make it a “climate-friendly business” – the term used by the French authorities for companies financing the COP21.

Sponsorship of the talks is only the tip of the corporate iceberg in terms of how multinationals are trying to use the next COP to promote their own solutions to climate change, for example, supposedly safer fracking, or cleaner burning of fossil fuels.

Unfortunately, such false solutions will only ensure a continuation of business as usual rather than the change we need to see. These companies are part of the problem, not the solution. The organisation of such crucial negotiations on an issue of such significance should not depend on their financing.

Despite its seeming inevitability, the excessive influence over and privileged accessed to political decision makers enjoyed by big business doesn’t have to be tolerated. In the area of tobacco control, campaigning from civil society and Southern governments saw the introduction of a firewall between tobacco industry lobbyists and public health officials to tackle the problem.

They argued that the damage caused by industry, for example by undermining the science, lobbying against good policies, posing false solutions, creating fake citizen front-groups, sponsoring of events, employing ex-health officials and civil servants – as well as the fact that their interests will never be aligned with the public interest – merited such a separation.

And this firewall between lobbyists and public health officials didn’t just apply to the tobacco control negotiations, but at national level, for every government who signed the treaty. The fossil fuel industry falls into the same category – lobbying to undermine progress, as well as having its economic interests completely at odds with what we need to do to tackle climate change.

We need a firewall between the big polluters and our politicians. François Hollande and his government should lead by example, refusing any interaction with dirty industry – COP21 sponsorship included.