Contrary to popular myths, the overwhelming majority of plastic pollution at sea occurs on the ocean floor, not on the surface. If we want to secure the health of our oceans, we therefore need to start looking at preventing marine plastic litter at source, writes Chris Sherrington.

Chris Sherrington is a Principal Consultant with Eunomia Environmental Research and Consulting.

The problem of plastic in the marine environment is well known but little understood. For most of us, our insight comes from bleak but increasingly familiar images: albatross carcasses stuffed full with plastic, seals tangled in old nets, beaches strewn with litter.

But images are a poor medium for conveying complex realities, and as increasing awareness of the problems associated with marine litter is beginning to translate into calls for action, we are in danger of focusing our energies in the wrong places.

Nowhere is this more evident than the case of ‘The Great Pacific Garbage Patch’, a huge area of the Pacific Ocean that is widely believed to be crammed so full of plastics that you could walk across it.

Fuelled by an over-eager media, the patch has become something of legend – a place within the North Pacific Gyre where our plastic leftovers meet and multiply. As its lore grows, so too has the funding directed towards initiatives designed to clean it up.

But while the concerns are genuine, the focus is misdirected – there is no giant patch of rubbish in the Pacific. Even if the clean-up initiatives worked as intended, they would literally be addressing a drop in the ocean.

Last month, Eunomia published a report on marine plastics, looking at how plastics get in the ocean and what happens to them once there. We started out with two key statistics and a question: each year, something in the order of 12 million tonnes of plastic flows into the sea across the world, yet only 250,000 tonnes are currently estimated to be floating on the oceans’ surface – a fraction of a percent of the plastic that is believed to be residing in the marine environment.

Where, then, is the rest?

Drawing on what we believe to be the best available data, we found that 94% of marine plastics are on the ocean floor, with an estimated average concentration of 70kg of plastic in each square kilometre of sea bed. By contrast, barely 1% is found floating on or near the ocean surface – less than 1kg for every square kilometre.

The surface amount increases at certain mid-ocean locations, and indeed the highest concentration recorded is in the North Pacific Gyre, where there is an average of 18kg of plastic for each square kilometre.

But far from forming an island of litter, the plastic is fragmented and dispersed – most plastic particles are well under a centimetre in size, while the highest concentration found through sampling in this area is ten particles per metre squared. 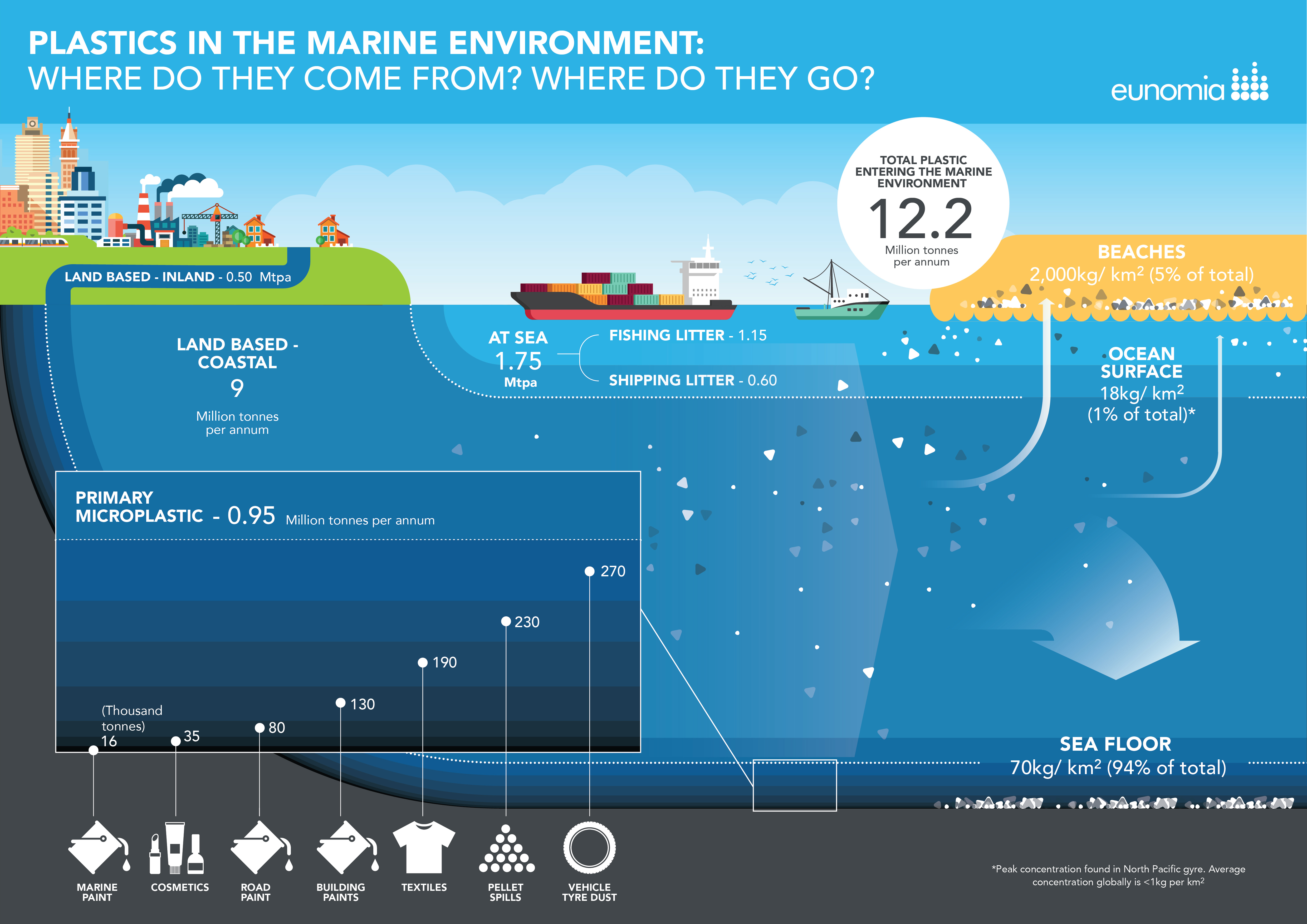 In recent years, there has been a growing interest in the role of microplastics. These are minute plastic particles, while trillions more enter the oceans each year from cosmetic products, paints, textiles, plastic pellet spills and tyre dust from vehicles.

Although the cumulative weight of microplastics is low compared to that of larger plastic items, their impact stretches up the food chain, as the particles are more easily digested by fish than bigger particles.

The implications of this are still relatively unknown, but plastics have been found to cause dangerous levels of toxicity to accumulate in animals higher up the food chain; in fish, birds and marine mammals. Where these animals end up on our dinner plates, scientists are working to understand what the human health risks are.

At present, no viable method of collecting microplastics from the oceans exists. The same goes for plastics on both the ocean floor and ocean surface. Our attention, then, would be far better focused closer to home – on our beaches.

The amount of plastic on beaches is five times greater than that floating on all the world’s oceans combined. The concentration, too, is far higher, averaging 2,000kg for every square kilometre of beach. While some of this will have been dropped directly by beachgoers, some of the plastic on beaches is washed in from the sea. And it keeps coming; there is a constant flux between beaches and the sea, as currents push floating plastics towards land.

By cleaning beaches, we are therefore cleaning the sea. This is the most effective way to start taking plastics out of the ocean.

But no amount of beach cleans will stem the flood of plastics that heads, day after day, into our seas; even if we had a small army  picking up litter on every beach, their efforts would be akin to trying to empty a running bath with a spoon. If we want to secure the health of our oceans for the future, we need to turn off the tap and start looking to prevent marine plastic litter at source.

The amount of plastic in our oceans is a clear sign that something is wrong in our linear economy. Around 20% of marine plastic comes from at-sea sources, most of which abandoned or lost fishing gear. The remaining 80% comes from land, much of it comprising single-use packaging items such as drinks bottles, or food packaging.

To address this challenge, we need to do two things. We need to start thinking about ways that we can move away from single-use packaging in the first place and we need to continue building plastics into a more circular economy that, by putting a value on plastic items, encourages them to be returned rather than lost.

For as long as our shops overflow with one-use plastics, the sea will continue to be flooded with litter. We need to be thinking about how to turn the tide.