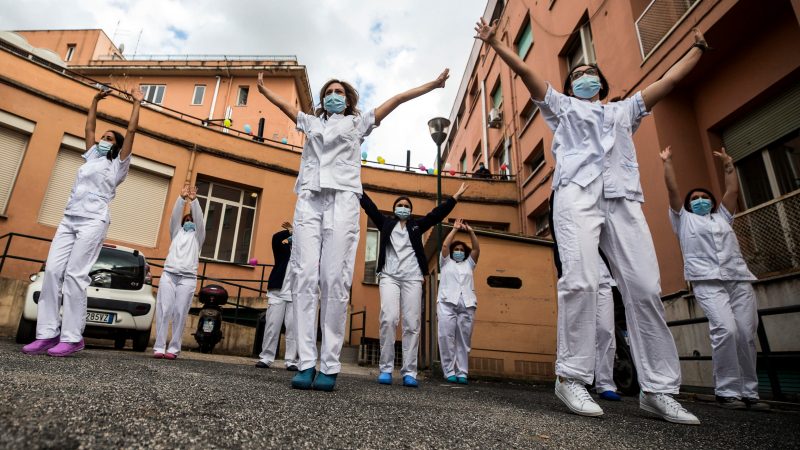 Doctors and nurses of the intensive care of the Umberto I polyclinic hospital during a flash mob organised to celebrate the end of Phase 1 of the Coronavirus C0VID-19 pandemic emergency in Rome, Italy, 10 June 2020. [EPA-EFE/ANGELO CARCONI]

A recovery that doesn’t protect the planet will be a disaster for health. I should know – I’m a doctor at the centre of Italy’s COVID-19 crisis, writes Roberto Romizi.

COVID-19 has turned the world upside down. As a doctor in Italy, I’ve seen patient after patient face up to the reality that they can’t protect themselves from this disease alone. Money, diet, hand sanitiser, private healthcare: none of it could have kept us safe unless thousands of us did the right thing at the same time to stop the virus spreading.

This pandemic proves that good health doesn’t exist in isolation. It depends on several external factors – one of which is a healthy environment. Scientists have long warned that climate change magnifies risks from infectious diseases, making outbreaks more frequent, less predictable and harder to deal with.

That’s why a recovery that fails to address the health of our planet would leave us more exposed to future crises, like a future disease outbreak, or crises aggravated by climate change.

Last year, roughly seven million people worldwide died as a consequence of air pollution in big part produced from burning fossil fuels. A recent report revealed that G20 countries continue to funnel money to oil and gas projects despite commitments made under the Paris agreement to reduce carbon emissions.

Some scientists are even beginning to find evidence that poor air quality in the north of Italy – places like Lombardy and Emilia Romagna – could go some way to explaining the horrific death rates we’ve battled in intensive care units.

The link between public health and the health of our planet has never been clearer. It’s why organisations representing over 40 million health professionals have signed a letter to G20 leaders calling for public health to be the centre of economic recovery packages as we slowly recover from this pandemic.

So as they begin to turn to the task of economic recovery, Europe’s leaders have a choice to make- Do they rebuild our economies with a coordinated plan that protects public health and constrains carbon emissions? Or will they fall back on failed business-as-usual policies, lifted from the last century?

The EU’s ‘green recovery’ plan – with the EU Green Deal and health protection as central pillars, and 25% of all funding set aside for climate action – is a welcome first step. Germany’s stimulus plan, with funding for green technology, is a positive sign too.

But pressure is still growing on Europe’s G20 leaders – France, Germany, Italy, Spain, the UK – to recognise that public health is inextricable from the health of our planet, which means that efforts need to be intensified to move towards zero pollution and that EU Green Deal conditionalities should be applied for all recovery action.

This means choosing economic policies that support the planet as well as driving economic growth. A recent paper by leading economists argues that climate-positive policies – like investment in clean energy infrastructure, or climate-friendly farming – have major economic benefits.

Its survey of central bank and Treasury officials across the G20 identified a series of COVID-19 recovery policies that would bring about effective economic stimulus, could be implemented rapidly, and that would deliver a positive impact on climate.

Or take London: widening pavements to give people more space, creating cycle lanes, and closing some of the city’s biggest roads to cars. They show how action to reduce carbon emissions goes on to create public health benefits, such as cleaner air, a more active population, and reduced transmission of COVID-19. Now, these cities need leadership and support from governments.

The breakdown of our climate means food insecurity, extreme weather, and polluted air that makes us sick. And the breakdown of public health – well, we’ve all just had a lesson in what that looks like. For the lucky ones, it means being trapped at home for months. For the unlucky and the most vulnerable, it means dying alone, struggling to breathe.

This crisis has been the most profound of my medical career, and it has changed the lives of everyone. This is why I – along with more than half of the global medical workforce – am so strongly in favour of governments making the right investments to transition towards a greener, healthier future that has public health at its heart.

It’s time for an end to the short-term thinking that made our communities so vulnerable to COVID-19, that clogs our cities and lungs with dirty air, and that causes climate change.

Now, a long-term plan for a healthy, resilient recovery should take its place. G20 leaders must put public health and at the centre of their economic recovery packages. Doing so will help everyone be healthier, enjoy longer lives, and live with more freedom.

The COVID-19 pandemic has reminded us that our survival depends on one other. It’s why Italians sing together from balconies, Parisians applause for health workers, and Madrileños write letters of encouragement to hospitalised COVID-19 patients.

Now it’s time to recognise that our collective health depends just as much on the health of our planet. Governments have the power, the ideas and the public support to plan for a green and healthy recovery from this pandemic. Those who fall back on the destructive policies of the last century will find themselves on the wrong side of history.