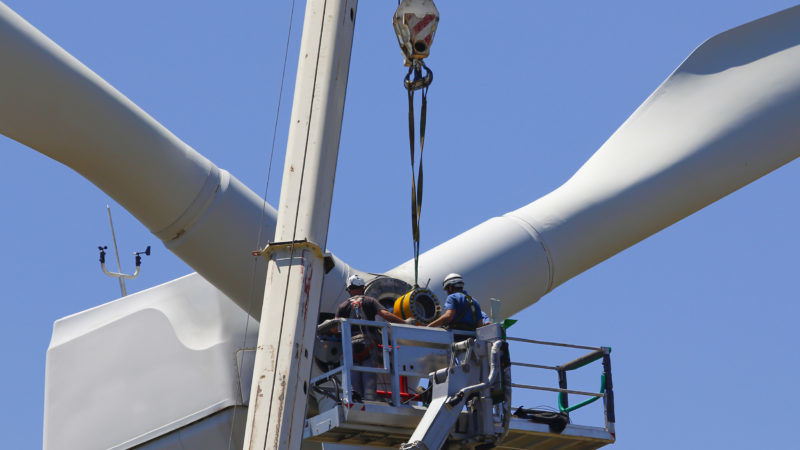 For decades, labourers were presented with a false choice: good jobs or a clean environment. They were told that efforts to cut pollution would kill jobs—that they had to choose between clean air and the economy. Now we know better, insists Kathleen Van Brempt.

Kathleen Van Brempt is a Belgian MEP and is the S&D group’s vice-president for sustainable development.

Now we know that a clean environment is not incompatible with employment. Now we know that the decarbonisation of our economy is not only inevitable, but that it also presents the greatest opportunity for the development of Europe’s labour force in decades.

This week when European Union leaders, employers, workers, and civil society actors all gather for the Social Summit for Fair Jobs and Growth in Gothenburg, Sweden, parties would be wise to consider climate change.

At the summit, governments are expected to sign the European Pillar of Social Rights, and in so doing they can reflect on how low carbon policies can be merged with social policies and employment. Indeed, reaching the Paris Climate goals, will be less an environmental or even a technological, but foremost a social issue.

Rather than accepting the outdated construct that decarbonisation will hurt workers, leaders should start to map out the plan for how climate action will actually become a driver for a sustainable economy, job creation, and social progress.

Around Europe, there are examples to remind us that such dramatic economic transition is not a new phenomenon, but rather is part of our long history.

In Germany’s Ruhr Valley, for instance, coal jobs dominated the workforce through the mid 20th Century, before market forces (and, to a lesser degree, public health and environmental concerns) started shutting down mines in the 1960s.

Today, the area is one of the country’s most prosperous, having gained as many service industry jobs as the coal industry lost.

In Bilbao, Spain, a similar reliance on the steel industry was shattered in the economic crisis of 1973, however local governments embarked on a rehabilitation plan to revamp the region, and today Bilbao thrives as a city of services.

More recently, there is evidence of how the transition from fossil fuels to clean renewables can be managed to protect and even benefit all, especially the working class. Not long ago, the Wallonia region of Belgium was a heavy industrial powerhouse, packed soot-spewing steel plants and the dirty heaps of coal slag that power them.

Today, those steel plants have given way to a booming renewable energy sector that has attracted a number of global cleantech leaders, providing opportunities for those steelworkers left behind.

This isn’t to say that such a transition is easy. Indeed, without foresight and proper planning, the shift from high carbon industries can be rocky. Consider the once sleepy city of Aberdeen, which quickly transformed to the “Texas of Scotland” after oil was discovered in the neighbouring North Sea.

Just as quickly as Aberdeen boomed in the 1960s, the industry there went bust in 2014 when oil prices fell by half. Over the next couple of years, thousands of jobs were lost, unemployment spiked, and social services like food banks were pushed to their limits.

On the fly, the regional government set out to replace the oil-stained economic losses with something more sustainable. Blessed with strong winds, both on- and offshore, the region also has strong and highly skilled workforce.

Wind power companies found that oil rig workers make great wind technicians. While the streets of Aberdeen still host too many shuttered storefronts, the wind industry there is burgeoning, and the working class and youth are feeling optimistic about the potential for the new low carbon economy.

As evident in Aberdeen, the inevitable transition won’t be smooth if it’s not planned for. Workers will lose their livelihoods—unless governments, employers, and labour start working together to prepare.

Parliamentarians can, and should, ensure that the transition from a dirty to a clean economy is also “just,” especially for those workers at risk of being abandoned by high carbon industries. What exactly is a “just transition?” A recent statement by ITUC describes it as “managing the transition towards a new sustainable economy, guaranteeing that it is not workers and their communities who pay for the change”.

We must not leave any worker behind in the pursuit of a clean, climate-friendly economy. And, frankly, there should not be any reason to. Anchored in renewable energy and energy efficiency, digitalisation and electrification, and services, the new economy needs skilled workers. With the right training and support system, labourers currently in carbon intensive fields can be ready to fill these roles.

At the Summit this week, leaders should not only acknowledge that a just transition is necessary, but should start actively planning for it. This includes support to the creation of just transition funds in order to achieve more ambitious climate targets while helping workers of affected sectors to move into new activities.

At the EU, we should have a just transition roadmap straight through to 2050. Leaders should promise that for every job lost in the move away from fossil fuels, at least one quality job is created.

Labour is ready to embrace the low carbon transition. All we need to play our part are governments who actively plan for this inevitable shift, and provide the training and support that our workers need to thrive in a carbon free future.