By Jutta Paulus and Marie Toussaint

The PCI label opens funding opportunities for fossil gas terminals and pipelines worth €29 billion although none of these projects are needed for Europe’s energy security, according to a recent Artelys report. [Pieter18 / Shutterstock]

Jutta Paulus and Marie Toussaint are Members of the European Parliament for the Greens/EFA group.

On 12 February, only months after declaring a climate emergency, a majority of EU parliamentarians voted to continue EU support for 32 fossil gas terminals and pipelines. (Actually we found that, when counting every project with their TYNDP code, there are 55 gas projects in the list, but that’s a different story).

These fossil fuel projects now enjoy highest EU priority, thanks to their inclusion in the Projects of Common Interest (PCI) list. This PCI label opens funding opportunities for fossil gas terminals and pipelines worth €29 billion although none of these projects are needed for Europe’s energy security according to a recent Artelys report.

Despite widespread agreement among the left and centrist groups in the Parliament that support for fossil gas should indeed be avoided, most parliamentarians refused to make use of their power to reject the PCI list, the only legally-binding action MEPs could undertake in the process.

Instead of rejecting the list, the centrist Renew Europe group sent a letter to Commissioners Simson and Timmermans asking them for assurances that no Connecting Europe Facility (CEF) money will be granted to gas PCI projects that are incompatible with the European Green Deal.

Subsequently, both Commissioners’ comments that only gas projects aligned with the EU Green Deal will receive taxpayers’ money have been heralded as a victory by Renew MEPs. However, we consider these “alternative actions” to be more like a smokescreen:

First, aligning EU taxpayers’ money for gas projects with the EU Green Deal can mean everything or nothing: as the Green Deal fails to include a rejection of fossil gas, the Commission may well consider gas PCIs compatible with this ever-less promising scheme.

This would be in line with the PCI selection process in which it seems to be very easy to make fossil gas projects seem climate friendly. ENTSO-G assigned a positive sustainability benefit to each and every one of the 112 gas PCI candidates and the Commission was prepared to accept industry data as a proxy for the sustainability criteria.

The fact that the Commission is ready to rely on industry assessments completely out of touch with climate reality proves that many MEPs have a naïve faith in the relevant Commission service’s judgement and objectivity. Even worse, neither the Commission nor the majority of MEPs take into account that methane emissions make gas almost as climate damaging as coal: the IPCC considers the greenhouse gas potential of methane to be more than 85 compared with CO2 when assessing a 20-year period.

Secondly, by not objecting to the PCI list, the European Parliament not only lost any further say regarding EU taxpayer’s money for these fossil gas projects, it also made EU loans for gas even harder to avoid.

While the Commission can promise to fund only EU Green Deal-compliant projects, neither the Commission, nor Parliament or Council can easily have influence on the potential billions that the European Investment Bank (EIB) could now pour into fossil gas. Despite its decision to cut fossil fuel funding in November last year, the EIB reserved the right to fund gas projects on the 4th PCI list, the exact same list the majority of MEPs failed to dismiss this week.

Thirdly, the PCI status is not only about money, as all gas PCIs on the list that parliamentarians approved will now automatically benefit from accelerated planning permission and a streamlined environmental impact assessment. That means MEPs are basically left where they were before the vote: with no direct way to influence support for these future stranded assets, missing the chance to really get a seat at the negotiating table with the Commission.

Meanwhile, the torrent of poor marks for gas PCIs does not seem to end: EU Ombudsman Emily O’Reilly launched an investigation into the PCI selection process this Thursday. The inquiry questions the legality of the lack of climate assessment for PCI projects with respect to article 191 of the Treaty of the European Union.

The empty sustainability criterion for PCI projects is now under investigation. It is regrettably clear that the Commission lacks motivation when it comes to integrating this essential criterion into the PCI process – we simply don’t have time to rely on promises to do better next time.

In reality, things are quite simple: to protect the climate, we should move towards a continuous decrease of the use of gas, which means keeping it in the ground. Indeed, the European Commission’s projections currently estimate that achieving the 2030 climate and energy targets will result in a reduction of natural gas use by 29% –from 415 billion cubic metres (bcm) in 2015 to 297 bcm in 2030.

Parliament must now ensure that fossil fuel projects do not receive a single cent of taxpayers’ money through the Connecting Europe Facility (CEF) and that the Commission protects public money from being wasted on gas projects by the EIB.

The Commission also needs to immediately install water-tight, future-proof sustainability criteria and undertake a proper climate assessment of all PCI projects, something it has failed to do since 2013.

We must also maintain pressure on the Commission to obtain a swift revision of the TEN-E Regulation, which will ensure that no future PCI list will see continued EU support for climate-wrecking fossil gas. For even if Commissioner Simson’s promise of presenting a TEN-E revision proposal in December 2020 at the latest will be kept, the projects for the 5th list to be compiled in 2021 will still be selected according to the process and criteria of the present version.

That’s why, next week, MEPs will be voting on a resolution in the Parliament’s ITRE Committee, calling on the Commission to take rapid and decisive action to bring EU energy policy up to date with our climate commitments. We will urge the Commission to revise the TEN-E guidelines by the end of 2020 and to propose transnational guidance on spending under the CEF and on the selection of the projects for the 5th PCI list.

Hundreds of thousands of people called on parliamentarians to stop support for gas projects, and the outcome of the vote was heavily condemned, by Greta Thunberg among others. Young people, scientists and the millions in the streets ask for it: As decision-makers it is our duty to act now. 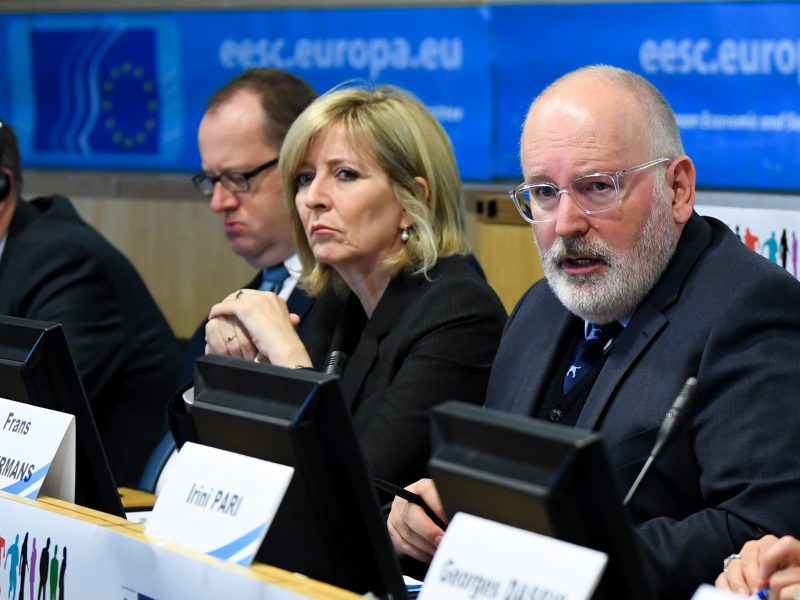 The EU Ombudsman announced on Thursday (13 February) it has opened an inquiry into the European Commission’s catalogue of priority energy projects, after green activists lodged a complaint about the inclusion of new gas infrastructure on the list.