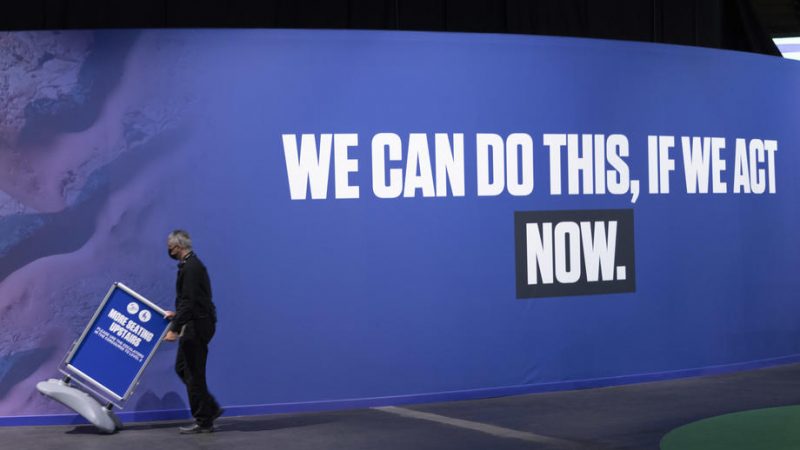 While activists battle to ensure taxonomy paves the way for real climate action, EU political leaders want to rebrand fossil gas and nuclear power as “sustainable”, when they are neither sustainable nor green, argue Greta Thunberg and a group of youth climate activists.

How serious are Emmanuel Macron, Olaf Scholz and Ursula von der Leyen about stopping the climate emergency? One month ago, the world’s climate diplomats gathered in Glasgow preaching it was time to act up on the climate crisis. And they were not shy about big words. Rumour has it that the host of the 26th UN climate conference, Alok Shama, even shed some tears over his closing remarks. And for a glimpse of time, it was easy to believe that our world leaders would really commit to living up to their responsibilities.

It took just a few weeks for their empty promises to be uncovered again. We are now facing a fight around the taxonomy – meaning the list of energy sources that will be allowed subsidies from the European budget.

As climate activists have been battling to ensure taxonomy paves the way for real climate action, the “leaders” have been working hard on rebranding fossil gas and nuclear power to “sustainable”, when they are neither sustainable nor green. This could turn into a real life climate-nightmare.

But let’s start from the beginning. Earlier this year, the EU Parliament has agreed on a list of sustainable investments (named the “taxonomy for sustainable activities”), clearly excluding fossil gas – which emits more than 100 g of CO2 emissions per year – AND nuclear energy. The Taxonomy was built on initial strong input from scientists and it survived a long negotiation battle in Brussels. It started to set a global standard, which extraordinarily pushed even the Russian government investment bank to follow the EU example and exclude gas from its own “Russian taxonomy”. It seemed that the EU is serious about staying in line with the Paris Agreement. Until now. Contrary to parliament decisions, leaders like Macron or Draghi have been giving in to the fossil fuel industry (surprise!). Scholz is undecided, Morawiecki uses Poland’s situation to delay any climate action, while Von der Leyen struggles to form the majority required.

The science is clear: The IPCC AR6 report and the International Energy Agency’s Net-Zero Roadmap have shown that the EU emissions budget has no room for new fossil gas. But those in power are creating last-minute chaos, watering down the taxonomy. Ursula Von der Leyen, Macron, Scholz, Draghi, Morawiecki – who are you trying to fool? Have you thought that we would not pay attention? Devil lies in the details – especially when it comes to climate action. We are living in times of mounting crises, but especially because of that there is no space for cowardly decisions, like allowing for this fake climate action. There is no wiggle room now for any decision that delays reaching real zero emissions.

Europe bears a historical responsibility to treat this crisis seriously and step up with adequate emission reductions. But history also shows us that Europe has great capability of change. It used to once be the cradle for the industrial revolution – it now needs to move on the path to yet another transformation, but this time one with ecology and justice at its heart. This path is not dependent on fossil fuels.

Let us quote another moment from COP26. The EU Commission’s Vice President Frans Timmermans closed a speech talking about us, the new generation that will live through the consequences of their greed and inaction. “They will not forgive us if we fail them today,” he said. Today is also the day. Proposing to add gas and nuclear in the taxonomy means one thing and one thing only: our politicians have no intention to treat the climate crisis like a crisis. And Timmermans is right: we will not forgive them.

2 responses to “Code Red for Humanity – or Green Light for more climate destruction?”