European leaders gathering today for an EU summit in Brussels will try to persuade Poland, Czechia and Hungary to rally the bloc’s proposed carbon neutrality goal for 2050. Brook Riley explains why this is both a moment of drama and anticlimax.

Later today EU leaders will be deciding whether Europe should be climate neutral by 2050. It is a moment of high drama but, paradoxically, one of anticlimax too.

But also anticlimax because if EU leaders cannot reach an agreement, Ursula von der Leyen has made it clear the Commission will go ahead anyway and put climate neutrality into law in her first hundred days of office.

As everyone knows, dealmaking in the European Council requires unanimity – whereas draft Commission legislation is negotiated between the Member States and the EU Parliament, where a majority suffices. So if even if there is no deal today, the issue will be back on the agenda next year. It means taking a hard line, but what choice do von der Leyen and Frans Timmermans have? Given the urgency and public demand for climate action, they can’t postpone any further.

My bet is it won’t come to that. Poland has negotiated well, too. Prime Minister Mateusz Morawiecki led the opposition to a deal during the June European Council, citing concerns about costs and financing. But he was careful to imply Poland could end up supporting 2050 climate neutrality, given enough financial support. And there is no denying this approach helped spur the Commission and European Investment Bank (EIB) into action.

The EIB has proposed a Transition Package with specific support for Bulgaria, Croatia, Czechia, Estonia, Hungary, Latvia, Lithuania, Poland, Romania and Slovakia. The Bank will finance up to 75% of project costs, compared to the usual 30-50% (which can make all the difference between a project stalling or going ahead). Just as important, there is no specific limit on the amount of money the EIB could provide under the advantageous Transition Package terms.

The Bank’s plans go hand in hand with the Just Transition Fund. This began as a European Parliament proposal for a small €4.8 billion budget over the next seven years. But von der Leyen has taken up the idea and massively increased the funding proposal to €100 billion. The details still need to be finalised. But one promising idea is to allocate a share of the Just Transition Fund to ‘technical assistance’ – that is, helping countries, cities and local authorities develop high quality projects and gain access to bigger sums of money.

The leaders of Poland, Czechia, and Hungary know this, of course. Nowadays climate action is about more than just greenhouse gas cuts. In today’s world of negative interest rates and bond yields, the financial sector urgently needs new investment opportunities. More and more, climate action – via building renovations, renewables and green transport – is being seen as a tool for economic stimulus. You can sign up to that even if you are sceptical about the importance of going climate neutral.

Besides, what are the alternatives? There will be no transition money if there is nothing ambitious to transition towards.

But I will still be holding my breath. Charles Michel’s head of cabinet, Francois Roux, told Member States’ ambassadors that today’s talks won’t end until a deal has been reached. Whatever happens it will be a long, tense night. 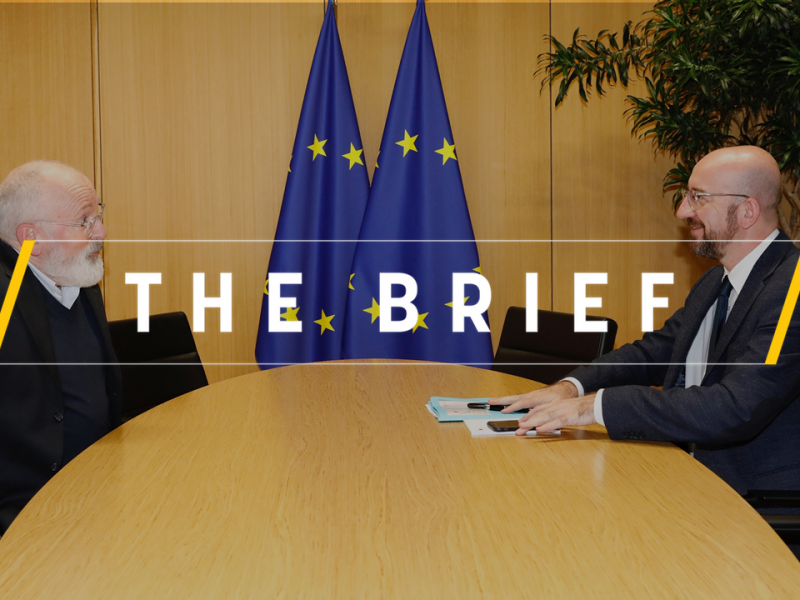 The Brief, powered by BP – Take the money and run

Two big events this week will shape the EU’s climate ambitions and any slipups could do irreparable damage to its green credentials. Here are how the pieces line up ahead of what will be a defining 48 hours or so.