The developing world is set to feel the effects of climate change most keenly. Decreasing aid is not an option. [CIAT/Flickr]

Finance Ministers are meeting on Tuesday (10 November) to agree what the EU will offer in financial support for climate action in developing countries. This is a pivotal meeting just a few weeks ahead of COP 21 in Paris, the most important climate summit of recent years.

While we do not need to tell European governments that climate finance will be crucial to help seal the strongest global climate deal possible, it’s vital they acknowledge that these funds do not need to come from development aid budgets already stretched to the limit.

Even if world leaders in Paris agree to commit to limit global warming to two degrees, large sums of financial support will be needed to adapt to the inevitable consequences of climate change: Africa is expected to face costs of $50 billion a year by 2050 under a two-degree scenario – that is equivalent to half of all today’s aid.

In Paris, poor countries will rightly ask for greater predictability of financial support, because the current year-on-year commitments are insufficient, depend too much on yearly political decisions, and don’t allow for long-term planning. Dedicated new revenue streams, distinct from national budgets are needed to provide predictable flows of climate finance, with long-term visibility.

Leading figures across the world such as IMF head Christine Lagarde, UN Secretary-General Ban Ki-Moon, French president Francois Hollande and Pope Francis have highlighted the importance of a credible financial support package for Paris. The latest addition to join the choir of voices are 11 international business organisations, calling on finance ministers to ensure the money promised to developing countries is delivered.

Without this, the climate deal in Paris may be at risk, and will at best end up as an agreement known for turning its back on poorer countries vulnerable to climate change.

Some EU member states have in the past months made important steps on the Copenhagen promise to deliver $100 billion annually by 2020 for climate action in developing countries. But even these new climate finance announcements are consistently raised from within aid budgets, which already now in most EU countries do not meet the agreed target to contribute 0.7% of GNI as aid.

Currently, we do not see any plan to stop the practice of paying for both climate and development challenges with this 0.7% commitment, which EU leaders have given themselves another 15 years to meet – arguing that times are tough and we cannot afford more.

This contradictory EU approach cannot be a vision to be sold in Paris. The time is ripe for the EU to provide new leadership, cut down on fossil fuel subsidies and re-engage in mobilising innovative sources of public finance that are not dependent on limited aid budgets. 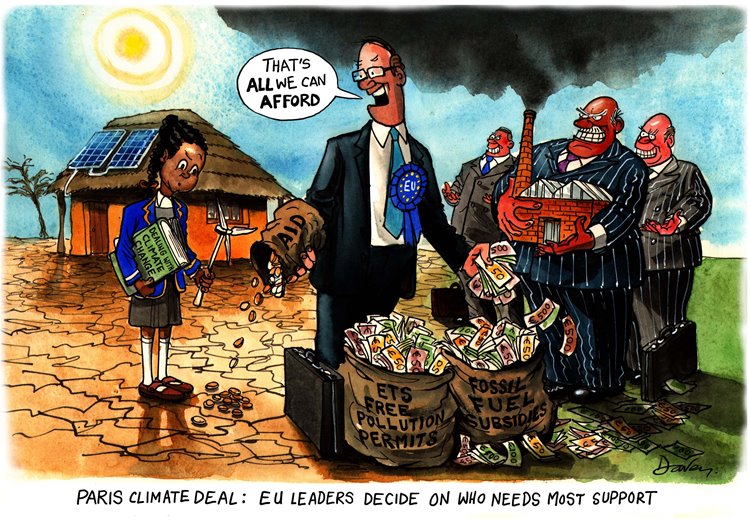 At COP 21, a strong signal to developing countries is needed that after 2020, when the agreement to be reached in Paris kicks in, public climate finance will continue to increase.

A particular focus needs to be on scaled up public support – not loans or private sector leveraging – for adaptation, through a clear, standalone goal for public finance for adaptation in the Paris agreement, to be reviewed in regular cycles.

The clearest signal the EU can give in Paris that it will provide additional support for adaptation is through setting up a new funding mechanism within the EU’s polluter-pays scheme, the EU Emissions Trading Scheme (EU ETS).

The EU ETS is currently being revised for the 2020-2030 period, so timing is perfect. The European Parliament already called on EU leaders to use the EU ETS to provide additional support for climate action in poor countries, urging them to set aside emissions allowances for climate finance and the Green Climate Fund.

EU leaders have agreed to continue to give the industry billions worth of free pollution permits in the next ETS trading period, as well as to set up two new funds filled with emissions allowances – one to support industry innovation, and one to support the energy transition in poorer EU countries.

Hence, there is no excuse not to set up an extra fund to help developing countries cope with the impacts of the pollution covered within the EU ETS. Progress on this issue would be a game changer for climate finance. Through an EU level set-aside, managed for example by the European Investment Bank, the EU could dedicate a portion of the revenues from auctioning directly into the Green Climate Fund.

Oxfam estimates that a set-aside of 10% of ETS allowances would raise almost €35bn over the period 2021-2030, resulting in on average over €3 billion a year. This would triple the EU’s current contribution to the Green Climate Fund.

Using the revision of the EU’s own polluter-pays mechanism can send a powerful signal internationally that it will offer post-2020 climate finance guarantees to developing countries. What is more, it would show the way for the many carbon pricing approaches that are currently being set up across the world, and give the EU the chance to be a real leader for a climate deal that takes the poorest countries on board.

0 responses to “EU should lead in climate finance, but not by robbing the aid pot”