European countries need to put real resources on the table to help the most vulnerable people in the world protect themselves from the climate crisis, writes Rachel Simon. [CIF Action / Flickr]

The commitments made by several European countries to the replenishment of the Green Climate Fund (GCF) are only a modest first step. More countries now need to come forward ahead of the upcoming GCF pledging conference in October, writes Rachel Simon.

At the UN Secretary General Climate Action Summit yesterday (24 September), a number of European governments put forward a range of new pledges for the replenishment of the Green Climate Fund (GCF).

However, with the exception of Sweden and Denmark, their contributions were only a modest first step and did not live up to their obligations to help developing countries tackle the climate crisis. Now more countries need to come forward ahead of the upcoming GCF pledging conference in October, in France – and others must top their pledges up.

Climate breakdown is already having major impacts on people’s lives, particularly those least responsible for its escalation in developing countries. It compromises sustainable development, perpetuates poverty, limits access to food and water and increases migration. Those on the frontline sorely lack the help they need to adapt. They also need help to avoid the mistakes we made – relying on dirty fossil fuels – and are now suffering the consequences of.

To help the poorest countries scale up their climate targets and cope with the climate crisis, European countries must at least double their contributions to the Green Climate Fund (GCF). The fund was established in 2010 under the UN Framework Convention for Climate Change with the intention to help developing countries reduce greenhouse gas emissions, prepare for the unavoidable impacts of a changing climate, and develop in a sustainable way.

The GCF is unique amongst climate funds in having a board governed by an equal number of developing and developed countries, balance between adaptation and mitigation funding, and it’s the first climate fund to mainstream gender considerations in its operations and projects. 2019 is a crucial year for the GCF, with a pledging conference for its first replenishment being held on 24-25 October in France, ahead of the UN Climate Summit COP25 in December. 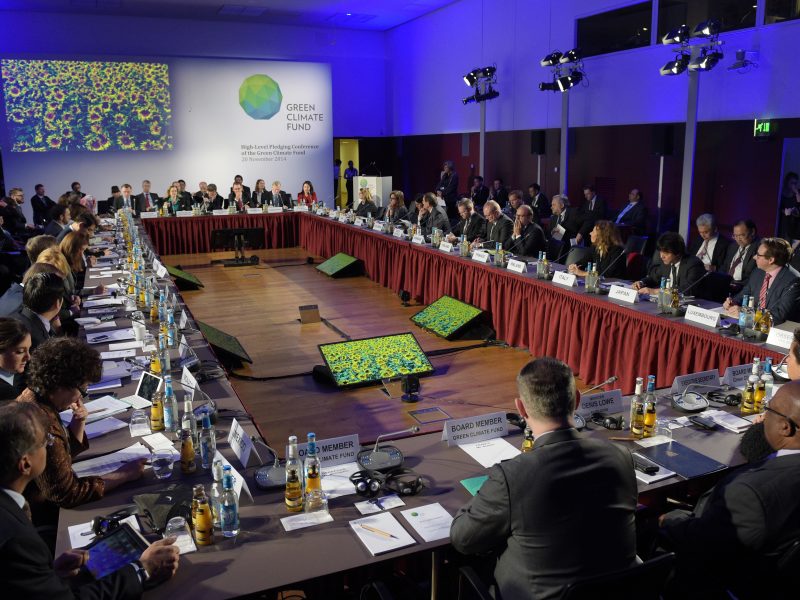 The GCF is a growing fund, steadily increasing its capacity and strengths in delivery of climate finance. An ambitious replenishment would boost the potential of developing countries to up their climate ambitions in their climate targets and adaptation plans; send a key signal on climate ambition ahead of COP25 in December; and help to build trust between developing and developed countries.

Some European countries have understood the need to at least double their contributions to the GCF. At the UN Secretary General Climate Action Summit in New York on Monday, Sweden lead the way with a doubling of its previous, already generous pledge to SEK 8 billion ($852.5 million).

Denmark announced a doubling of its pledge soon after the summit. Countries including Germany, Norway, France and the UK had already committed to doubling their pledges prior to the UN summit. The total sum dedicated to the fund is currently $7.4bn.

However, the finance that many other European countries are putting on the table is nowhere near what is needed. At the UN summit on Monday, several countries announced pledges at a similar level to their initial contributions. These include the Netherlands ($135.1 million), Spain ($168.9 million), and Austria ($33.8 million). European governments need to understand that as costs of tackling climate change are increasing for the world’s poorest, so must their solidarity with them.

Iceland and Liechtenstein announced a doubling of their contributions to $2 million and $100,000, respectively. While pledges are welcome from countries large and small, these countries’ first contributions were disappointing. A number of smaller countries need to step up with new pledges that go far beyond doubling considering their relative wealth.

The next major opportunity to double their pledges to the Green Climate Fund or make their first contributions if they have not pledged so far is the pledging conference in a month from now. Luxembourg and Belgium announced intentions to make ambitious pledges at the UN summit on Monday, and the replenishment conference is the time to come up with concrete figures. We will also be looking for pledges from wealthy European countries that have remained silent so far, such as Italy and Switzerland, and from countries who have never pledged before.

We are not just looking for quantity, but quality contributions; developed countries must provide financial resources that are new, additional, adequate, and predictable contributors should put forward grants-based finance, without any conditionality and with no demands for ear-marking of funds.

European countries need to put real resources on the table to help the most vulnerable people in the world protect themselves from the climate crisis and to ensure they can contribute to the global effort to halt it with increasing their climate targets.