G7 leadership is critical to put the brakes on deforestation 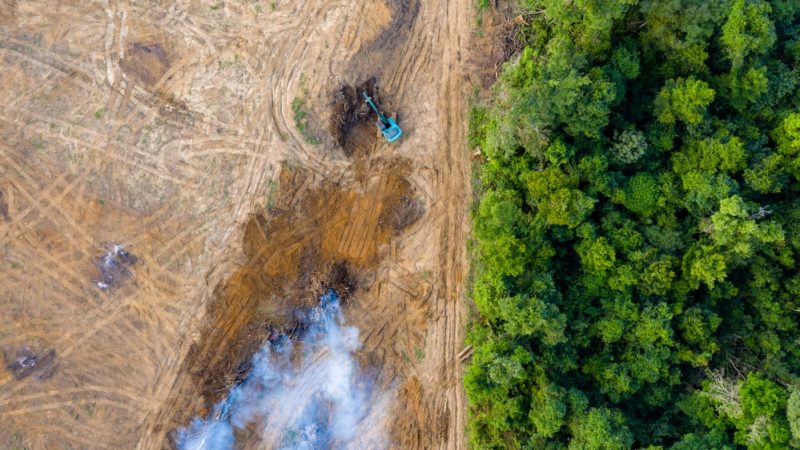 In 2021, the tropics lost 3.75 million hectares of primary forest. That’s equivalent to 10 football pitches a minute. If the world does not crack down on deforestation, today, climate change impacts will become more severe and frequent [Shutterstock / Richard Whitcombe]

Deforestation is happening at a rapid pace and threatening food security everywhere. With the G7 Summit Meeting in June approaching, leaders are responsible for tackling deforestation as a major driver of climate change, writes Ani Dasgupta.

Ani Dasgupta is the CEO of the World Resources Institute.

Barely six months ago, leaders from 141 countries stood on a stage in Glasgow and committed to halt and reverse forest loss and land degradation by 2030.

But Global Forest Watch data, published on 28 April, shows the world is far from winning this fight.

In 2021, the tropics lost 3.75 million hectares of primary forest. That’s equivalent to 10 football pitches a minute. If the world does not crackdown on deforestation today, climate change impacts will become more severe and frequent.

The upcoming G7 Summit meeting will understandably be dominated by discussions around the conflict in Ukraine, the soaring cost of food, the COVID recovery, and an ever-warming climate.

These immediate challenges – which at first glance seem good reasons for delaying action on tropical deforestation – are deeply connected to the issue.

That’s why the G7 is also an opportunity for the leaders of some of the world’s largest economies, which are all signatories to the Glasgow goal, to get real about what it will take to end deforestation.

Evidence shows that deforestation is a major driver of climate change. Increased climate volatility is projected to result in regional breadbaskets failing across the globe.

Russia’s invasion of Ukraine and the ongoing conflict have shown how disrupted commodity exports impact food security everywhere. This is what the future holds if we do not take urgent action on tropical deforestation.

The German G7 Presidency has rightly placed tropical deforestation high on its agenda. G7 countries are major consumers of the commodities that drive forest loss – including soybeans, beef, palm oil, pulp and paper, rubber and leather.

Between 2007 and 2017, G7 members (including the EU) were collectively responsible for nearly one-third of tropical deforestation associated with internationally traded agricultural commodities. That is roughly the land area of Costa Rica – ironically known for its lush tropical forests and rich biodiversity.

Now is the time for G7 leaders to take responsibility and show how they are acting on their promises in Glasgow. As G7 environment ministers prepare to meet today, here are the immediate steps they can take

First, G7 nations need to align and follow through on their efforts to enact measures such as ‘due diligence’ legislation which would prohibit the entry of commodities linked to different types of deforestation in the tropics. The EU, the US and the UK are all advancing efforts in this direction.

US President Joe Biden recently ordered his government to begin assessing options for a whole-of-government approach to combating international deforestation (including proposed legislation). This focus is shared by a draft bill prepared by the European Commission currently under review.

The UK, meanwhile, is in the latter stages of adopting its own proposed due diligence legislation. These steps should be applauded, but time is of the essence.

G7 nations that have not yet embarked on efforts of this kind – such as Canada and Japan – must catch up. And across the G7 membership, measures should be taken to ensure alignment of the proposed laws.

Second, G7 countries must recognise that, while demand-side regulation is essential, it must be complemented with technical and financial assistance for producer countries that make credible commitments to reducing deforestation at their end of the supply chain. Ultimately, solutions to deforestation require partnership.

Many of the world’s producers of agricultural commodities are smallholder farmers, such as the cocoa farmers of West Africa or palm oil producers in South-East Asia. At a time of market volatility and global food price hikes, it is incumbent on consumer nations to combine proposed due diligence measures with a generous package of support.

Technical assistance and climate finance can sustainably boost yields while leaving forests standing and assist producers with a more equitable and inclusive transition. Ultimately, the hard work of halting deforestation happens on the ground in tropical forest countries.

Take China as an example. It plays a decisive role in global supply chains. Its demand for forest-risk commodities is projected to grow enormously as reliance on imported food and feed increases.

China has the opportunity to be a leader of positive change in the space as its willingness and actions carry weight. Also notable are emerging markets, like Brazil and Indonesia, where deforestation is embedded in products that are both produced and consumed domestically.

G7 members need to use the whole policy toolbox to incentivise these actions. Collectively they have a range of tools at their disposal and possess significant trade clout. The foundation must be a genuine partnership with producer countries. G7 trade ministers meeting in Berlin in September can also advance action in this area.

The G7 has a golden opportunity to take the lead in advancing global action on tropical deforestation to secure a habitable planet for all. The compounding risks of conflict, soaring food prices, COVID recovery, and a volatile climate make a compelling case for increasing the global economy’s resilience.

While this three-minute-long read was food for thought, it might also have cost us 30 football pitches of lost forests. We simply do not have a moment to lose.