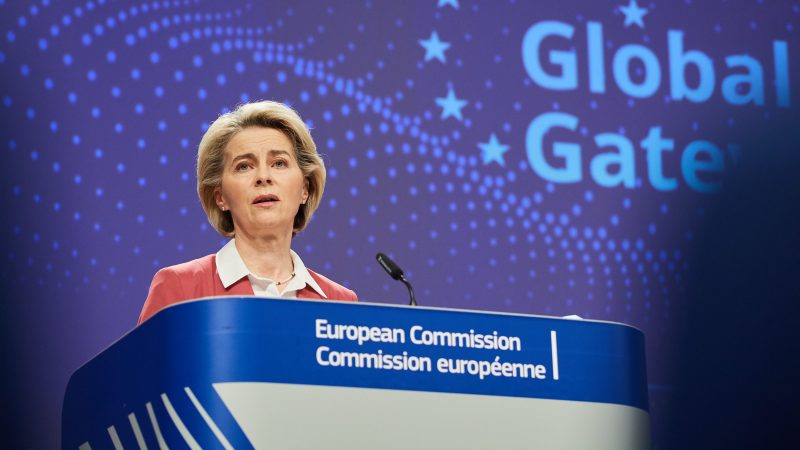 Ursula von der Leyen, President of the European Commission, at a press conference on the Global Gateway, the new European Strategy to boost smart, clean and secure links in digital, energy and transport and strengthen health, education and research systems across the world [Dati Bendo / EC Audiovisual Service]

We stand at the start of a critical year for tackling climate change with a closing window of opportunity to fight global warming. Europe has made good progress in driving action and needs to work with its global partners to make this a reality around the globe, writes Mafalda Duarte.

Mafalda Duarte is CEO of the $10.5 billion Climate Investment Funds (CIF), one of the world’s largest multilateral funds for climate action in developing countries.

Nelson Mandela once said that vision without action is merely daydreaming, while vision with action can change the world. As the global climate crisis intensifies, Europe can and must lead to deliver more of both – not just within its borders but around the world.

The stage is already set. The EU is on track to become the first carbon-neutral continent by 2050 and reduce emissions by at least 55% before 2030. Even better, these targets are more than talk. The European Climate Law enacted this year puts Europe at the vanguard of the global response to climate change.

This alone is commendable progress. But it does not end there. Europe is responsible for just 9% of global emissions, leaving a whole world of opportunity for advancing a better climate future for all. Nowhere are the needs and opportunities greater than in developing countries, where we can win the race against climate change.

There are heartening signs that Europe is on the right track. The EU has just unveiled a wide-ranging €300 billion investment program that aims in part to finance climate-smart infrastructure around the globe. The Global Gateway initiative has the potential to unlock significant levels of investment in the developing world.

And it must. To keep up with expansive population growth and economic development, in the years to come, nations in Africa, Asia, Latin America, and Eastern Europe will need to dramatically scale up investment in infrastructure and industry.

Against the backdrop of the climate emergency, it is vital these investments – which could amount to as much as $2 trillion a year – are made in harmony with our planet and the people it supports. We cannot afford more coal-fired power plants and other infrastructure that locks us into more carbon-intensive growth.

To that end, in November 2021, European Commission President Ursula von der Leyen announced the EU is joining forces with four countries and the Climate Investment Funds (CIF), the multilateral fund I lead, to help finance South Africa’s equitable transition away from coal power.

The $8.5 billion Just Energy Transition Partnership is poised to support South Africa’s bid to cut annual greenhouse-gas emissions by almost a third over the next decade. With financing from CIF’s newly established Accelerating Coal Transition program, the Partnership is a global first that can serve as a template for other fossil fuel-dependent developing countries seeking to move past coal, for example, by retiring and repurposing coal assets, supporting affected communities, and building up new clean power capacity.

But this is no time to rest on our laurels. We must keep up the momentum. We must scale up and direct finance where it is needed most, in developing countries, and do so as effectively as possible.

There is a tried-and-tested playbook for climate finance, and it is not about funding a climate-resilient bridge in country X or a solar power plant in country Y. These one-off investments working in isolation will not ignite the large-scale changes we need to mount a serious defence against a challenge as far-reaching as climate change.

Instead, impactful climate finance lays the groundwork for paradigm shifts that transform whole systems, for example, institutions, policies, and markets. It addresses barriers to progress – be they institutional, regulatory or financial – so that lasting structural change can take place, making way for bold new approaches to transportation, energy, and other critical sectors.

That’s what CIF – one of the world’s largest funds of its kind – has been doing for more than a decade. We are channelling $61 billion to unlock breakthroughs in climate action in developing nations, for example, cost reductions to build the world’s largest concentrated solar power plant and the establishment of Zambia’s first nationwide climate change authority.

The climate decisions we make now will have enduring implications for years to come. We face a closing window of opportunity to enact the unprecedented transitions in land use, industry, energy, transportation, and urban development needed to overcome this global challenge.

As we enter the most critical year yet for addressing the climate emergency, the EU is in an ideal position to drive the global climate finance agenda forward. By raising its ambition and working jointly with partners to support developing countries at the scale and speed this moment in history requires, Europeans can play a major role in building the climate-smarter world that we all need.