By Andreas Goldthau and Simone Tagliapietra 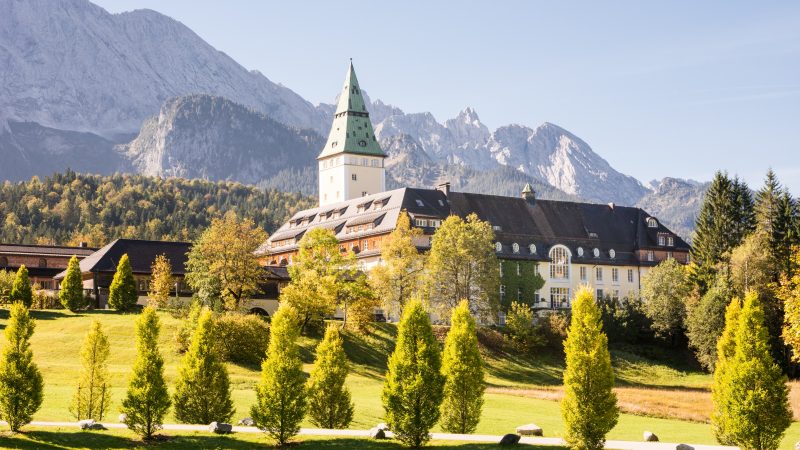 Schloss Elmau in Bavaria, Germany on September 28, 2014. The castle which is now a luxury hotel will be the site of the G7 summit in 2022. [manfredxy / Shutterstock]

Andreas Goldthau is the Franz Haniel Professor of Public Policy at the University of Erfurt’s Willy Brandt School of Public Policy. He is also research group leader at the Institute for Advanced Sustainability Studies.

Simone Tagliapietra is Senior Fellow at Bruegel and Adjunct Professor for Energy, Resources and the Environment at Università Cattolica and The Johns Hopkins University – SAIS Europe.

Science has made abundantly clear that to avoid the most dramatic consequences of climate change, humanity needs to keep the global temperature increase within 1.5°C. But while COP26 has raised climate ambition, the world remains on track for a 2.4°C increase.

To accelerate global climate action, the German G7 presidency intends to advance a “cooperative and open climate club”. This represents an important and promising initiative, the potential benefits of which could be greatly enhanced by channelling international carbon dividends back to poorer nations to support their clean transition.

Long discussed in economic circles, the climate club idea has recently gained momentum. Its contours are clear: club members commit to ambitious domestic emissions reductions and, at the same time, jointly introduce carbon border adjustment measures to hedge against industry moving to regions with lower climate ambitions. In addition, they cooperate on the transformation of their industrial sectors to establish an international lead market for climate-friendly materials and products. That way, climate policy pioneers will avoid a competitive disadvantage in the international marketplace because of their climate efforts, especially when it comes to energy-intensive industries.

All this is sensible, but to be aligned with the Paris Agreement, a climate club needs to respect the principle of common but differentiated responsibilities, which postulates that while all countries must take responsibility for fighting the global climate crisis, it is necessary to recognise the significant differences in terms of economic development and historical carbon emissions.

For a climate club to respect this principle and to live up to the imperative of climate justice, it is key to support to emerging economies and developing countries in their transition to a low carbon future. The German proposal hints at helping emerging economies and developing countries to potentially become members of the climate club, but it remains vague on the issue.

Much like domestic carbon taxes, carbon border adjustment measures can also hit the poor harder than the rich – now on a global scale, that is in the Global South. And as carbon dividends can be seen as the building blocks for a future climate safety net for citizens, revenues of carbon border adjustment measures can amount to the same at the global level.

Short of that, the rich will end up taxing the poor. This not only unacceptable from an ethical point of view. It also risks discouraging the much-needed support from Global South nations for international climate action. And this is exactly the reason why revenues obtained from the mechanism must be used as international carbon dividends.

Critics claim is that trade should not be used as a climate policy instrument. In our view, this is just inevitable. To act in line with their domestic climate goals, countries need to act beyond their borders. The recent proposal to curb EU-driven deforestation gains teeth by banning imports of products such as beef, palm oil, cocoa linked to deforestation globally. Short of a climate leviathan – that is, in the absence of coercive powers in the framework of the Paris Agreement – low ambition in climate action can only be upped via raising the costs, that is, through trade.

The world is at a crossroads. We need to find new ways of stimulating global climate action and addressing the free-rider problem stemming from climate policy costs being largely national while the benefits are global. Clearly, the Paris Agreement must remain the central pillar of global climate action. But the world needs complementary measures to speed-up climate efforts. During its G7 presidency, Germany should therefore provide a strong push for a climate club.

That said, such a club should indeed be open and cooperative. That centrally means membership can be thought of as a tit-for-tat: prospective club members commit to climate action, in return for which they benefit from international carbon dividends and a clear commitment by club members to join forces in fostering technology transfer and climate finance.

One thing’s for sure, though: against the backdrop of the global climate crisis, the key question is not whether trade should or should not be used to incentivise climate action. The question is how it should be used to do so. In our view, a climate club built around the notion of international carbon dividends represents an important step in the right direction – and 2022 might be the year to deliver it.