The number of cities exposed to extreme temperatures is expected to nearly triple over the next few decades. One solution is to radically change the way we use cars in cities by replacing parking space with “parklets”, writes Ross Douglas.

Ross Douglas is Founder & CEO of Autonomy, the international annual event on the future of urban mobility, which takes place this year in Paris.

I have just returned from a family holiday in Brittany. We chose the north west of France to avoid Europe’s latest heat-wave.

Global warming contributed to one of Europe’s hottest recorded summers, with parts of Spain, Portugal and Greece reaching the upper 40s Centigrade. At these temperatures the blood thickens and the brain struggles for oxygen. If core temperature rises above 40.5°C then we risk deadly heat-stroke.

The ‘urban heat island effect’, whereby city temperatures are driven ever higher due to the built environment absorbing and radiating heat, will prove a major challenge for cites.

Guardian Cities predict that many cities across the world will reach 50°C in the near future. In the article, ‘Halfway to boiling’, they paint a grim picture: “The pavements are empty, the parks quiet, entire neighborhoods appear uninhabited. Nobody with a choice ventures outside during daylight hours. Only at night do the denizens emerge, HG Wells-style, into the streets – though, in temperatures that high, even darkness no longer provides relief.”

According to C40, the number of cities exposed to extreme temperatures will nearly triple over the next few decades. By 2050 more than 970 cities will experience average summertime temperature highs of 35˚C. Today, only 354 cities are that hot.

To make matters worse, the urban population exposed to these high temperatures will increase by 800 percent to reach 1.6 billion over the same period. So desirable cities will not only have to attract talent and investment, run reliable public transport and host major international events – they will also have to keep their workers cool.

According to a 2016 UN study the loss of productivity caused by rising temperatures could top $2 trillion by 2030. Air conditioning is one solution. People in Kuwait, which reaches 50˚C, commute and work under permanent air conditioning. This would not be ideal for Europe, which thrives on its street life and boutique shopping experiences. Imagining not being able to walk through Venice or Paris? 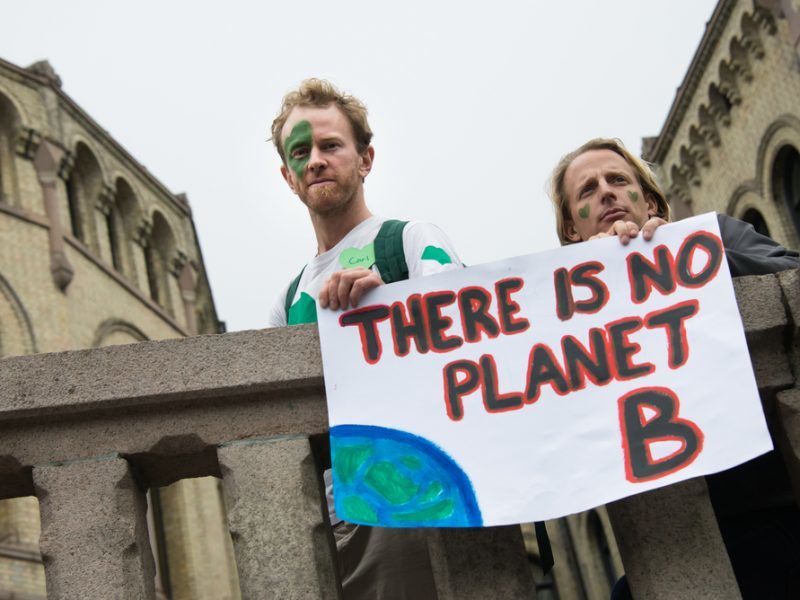 The world is at risk of entering “hothouse” conditions where global average temperatures will be 4-5 degrees Celsius higher even if emissions reduction targets under a global climate deal are met, scientists said in a study published on Monday (6 August).

How can Europe cool its streets to preserve this way of life?

Asphalt can get 20˚C hotter than ambient temperature as it absorbs up to 90% of the sun’s radiation. L.A. Mayor Eric Garcetti aims to cool the city by 1.6˚C over the next 20 years. Part of the plan is to paint over many of the city’s black roads with a reflective white coating called CoolSeal, a product originally developed for the military. The company claims that the reflective coating can reduce the ambient temperature by as much as 5˚C. But it costs of €30,000 per kilometer and only lasts seven years. Also, the glare is uncomfortable on the eyes.

Vegetation is a natural counter to heat. Plants drink up and then release water back into the atmosphere in a process called evapotranspiration. This drops the surrounding surface temperature, much the same way sweat cools the body by transmitting body heat in the process of evaporation. Green buildings use plants to reduce heating and cooling costs, but these rooftop gardens have no cooling effect where it is needed most – at street level.

Melbourne probably has the world’s most ambitious urban greening strategy. The city plans to plant 3,000 trees per year in the hope it can reduce city temperatures by up to 4˚C. While this solution works well in a low density city like Melbourne, it would be hard to replicate in most European cities as there is not the same amount of space for trees.

Another solution is to radically change the way we use cars in cities. Combustion cars contribute to heating, with 80% of the energy from the burning of fossil fuel converted to heat. According to a report published in Nature in 2017, the mass adoption of electric vehicles in Beijing would lower the city’s average temperature by 1˚C.

In addition, parked cars occupy space that could be greened. By swapping two tons of stationary car with a ‘parklet’, cities would add a greening structure at a low cost. Parklets are temporary structures usually made of wood that can accommodate plants, benches and a table: a little green oasis.

At Autonomy we have been working on the idea of scaling parklets using urban volunteers. There are many initiatives that connect volunteers through simple apps to improve their city. Code for America is a good example of this. Citizens, connected by an app, use their skills and time to assist the city, often doing simple things like clearing leaves from drains to reduce chances of flooding. Urbanites could download the app, order a parklet for their street, and plant and manage the micro-garden to the neighborhood’s benefit.

Successful cities will facilitate collaboration between policymakers, innovative businesses and citizens. Autonomy is dedicated to building platforms that do just this.