How Italy can charm China into global climate action

By Bernice Lee and Luca Bergamaschi 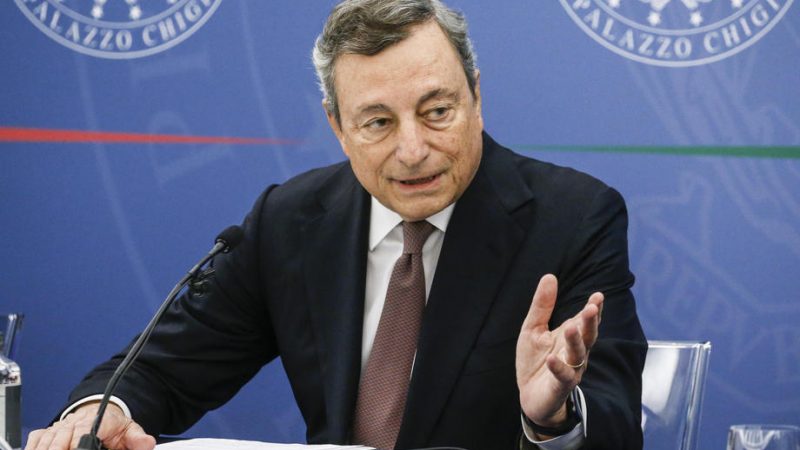 epa09443046 Italian Prime Minister Mario Draghi during a press conference at the end of a Cabinet meeting that addressed rules for the use of Green Pass against the spread of Covid-19, Rome, Italy, 02 September 2021. EPA-EFE/FABIO FRUSTACI / POOL

Mario Draghi can use his role at the helm of the G20 to persuade China to sign up to global climate targets, argue Luca Bergamaschi and Bernice Lee.

Luca Bergamaschi is Co-Founder of ECCO, an independent Italian think tank on climate change, and Bernice Lee is Research Director for Futures at Chatham House

Less than a year into his post, Mario Draghi has the opportunity to cement an international legacy that will well outlast Italy’s recent wins at Eurovision, the European football championships, the Olympics and European women’s volleyball championships. It could actually create a healthier, more stable and more secure future for our youngest and future generations.

To do that, the Italian prime minister will have to use his role as president of this year’s G20 leaders’ summit to charm China into a new alliance that brings the world’s largest greenhouse gas emitter on board for a global transformation to net zero emissions.

This will be no easy feat, against the backdrop of raging weather extremes, Afghan turmoil and the unrelenting Covid-19 pandemic. But tackling these global crises takes cooperation between the biggest economic and political powers and across East and West, developed and developing worlds. And there is no better place to begin building that cooperation than in the G20, whose leaders meet in a summit chaired by Draghi in Rome on 30-31 October.

Draghi’s charm offensive started this month, with a phone call with Chinese President Xi Jinping. The two reportedly agreed on the need to lead their bilateral relationship through China’s Belt and Road Initiative (BRI) for international infrastructure development and for coordination between the Winter Olympics in Beijing in 2022 and Milan in 2026.

Next, however, Draghi will need to turn attention to brokering a G20 agreement on climate action with China’s buy-in – starting with the United Nations General Assembly this week, where leaders will gather in person and virtually.

Specifically, the climate crisis calls for agreement between the 20 economies and emitters to limit global warming to 1.5 degrees Celsius and follow the science on what it takes to get there. That includes phasing out support for coal and earmarking some Covid-19 recovery spending to cut emissions and adapt to the climate impacts we’re already experiencing.

China is crucial in this agreement because what it does on foreign and domestic policy sends waves around the world, through its expansive BRI, its world-leading share of emissions, its seat on the UN Security Council and its economic and political influence in Asia, Africa and elsewhere.

The question is whether Draghi can meet the challenge of forging international leadership, after years of Italy driving from Europe’s backseat.

We certainly think he can. As a former head of the Financial Stability Board and European Central Bank, Draghi has experience forging cooperation rooted in economic security. It helps that, as the first Western power to join the BRI in 2019, Italy started building a new and trusted partnership with China during its darker relations with the US Trump administration.

In so doing, Draghi would revive Italian explorer Marco Polo’s role as a bridge between the East and the West, a reliable and pragmatic security and humanitarian partner and a green economic partner with China along the many modern-day Silk Roads.

Here’s how. First, Draghi needs to present Xi with a strong political offer: an in-person visit to Rome for the G20 leaders summit. There was no reported mention of this on their phone call. But as Xi’s first international trip since the Covid-19 pandemic began, it would send a political signal of new efforts to collaborate, allow Xi to meet the new US President Joe Biden and attend the crucial UN climate summit in Glasgow the following week.

Second, Draghi needs to reassure Xi that a consensus deal is within reach. This would ensure that Xi can bring home a win after leaving the country in the midst of one of the world’s strictest Covid-related restrictions. This deal should of course include strong climate ambition, with an accelerated coal phase out.

Third, Draghi can expand the Italy-China relationship with a joint commitment for climate action and international Covid-19 vaccine distribution. They could commit to aligning future investment in the other country with a global warming limit of 1.5 degrees and each country’s target for reaching net zero emissions. This should include commitments to exclude new investments in fossil fuels, including gas, and to jointly invest in projects in third countries that exclude coal, oil and gas.

For both China and Italy, the only credible path forward is one with strong green credentials. Anything less could be dismissed as a kowtow to China.

For Italy, building and leading a new East-West alliance is a chance to pick up the mantle of an awkward-but-friendly outward-looking European interlocutor, particularly in an uncertain post-Brexit Europe where Germany and France face leadership challenges. 2021 has been one of Italy’s most successful years in a long time. Now comes the geopolitical test that could showcase Italy’s ability to thrive outside the long shadows of France, Germany and Great Britain.

A concerted deal on G20 climate action will reposition Italy in this new era of major power diplomacy while helping pave a new Silk Road for cooperation and investment towards clean and green infrastructure. This, in turn, will set a positive foundation for global agreement at the UN’s COP26 climate summit Glasgow in November, which Italy is co-hosting with the UK.