How the EU can help end the onslaught against the Amazon 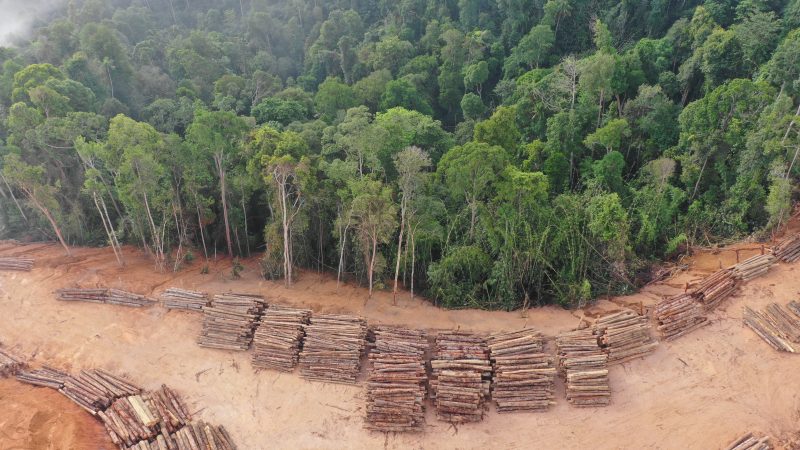 The world’s biggest tropical forest is being devastated at an accelerated pace. In Brazil, home to 60% of the rainforest, an area larger than Ukraine and Belarus combined was clear-cut in the last 50 years. [Shutterstock / Rich Carey]

A key EU regulation may help fight the climate crisis in the decisive battleground of tropical deforestation. But it needs serious improvement, writes Marcio Astrini.

Marcio Astrini is the executive secretary of Observatório do Clima, a network of 72 civil society organizations which is Brazil’s biggest coalition of climate NGOs.

The world’s biggest tropical forest is being devastated at an accelerated pace. In Brazil, home to 60% of the rainforest, an area larger than Ukraine and Belarus combined was clear-cut in the last 50 years.

During the regime of far-right President Jair Bolsonaro, self-dubbed “Captain Chainsaw”, deforestation has spun out of control: an area the size of Belgium was lost only in the last three years.

Destruction of the Brazilian Amazon has increased by 75% under Bolsonaro, spelling doom for the climate: every year it emits more greenhouse gases than Spain and the UK together. Each Amazonian citizen emits more carbon in a year than an average Australian.

The South American rainforest can make or break the Paris Agreement’s goal of keeping global warming at 1.5 °C compared to pre-industrial levels.

If deforestation returns to 2004 record levels, Brazil might end up emitting per year about as much as the United States, which would be a severe blow to the global effort to cut 43% of the world’s emissions by 2030, as indicated by the IPCC as the only way to keep 1.5 within reach.

Worse, recent evidence suggests that parts of the Amazon are already emitting more carbon than they absorb – a sobering reminder that a “tipping point” scenario of forest dieback with massive CO2 release, feared by scientists for 30 years, can no longer be ruled out.

Fortunately, Europe has in its pocket a weapon to help fight the Amazon climate battle.

The decision to pass an EU-wide regulation on deforestation-free products is a huge step towards meeting the goal of the Glasgow Declaration of halting and reversing the loss of natural ecosystems by 2030, and may also help Brazil rein in deforestation again as it did earlier this century.

In fact, it could pave the way to zero deforestation even earlier than 2030, for reasons we shall examine.

The regulation is politically neat because it skips the main glitch of any attempt by the international community to halt tropical deforestation: the sovereignty issue.

Europe of course has no say over what Brazil does with its forest. It does have, however, total control over its own purchase power.

By applying due diligence to farms willing to sell commodities to the European market, and tracing those to the source to ensure no deforestation – legal or illegal – happened in those plots of land, the EU proposal leaves it to the producing countries the decision to either comply or procure other costumers.

This sets a powerful benchmark for the whole international tropical commodities trade. Other importers may use compliance with the EU regulation as a proxy for sustainable production, and soon zero-deforestation exports may become the norm, accelerating the Glasgow Declaration timeframe and softening the path towards 1.5 °C.

In Brazil, exporters are expected to scream blue murder fist and then comply: voluntary market agreements have been in place since 2006 when the soybeans sector committed to a moratorium on deforestation that holds to this day.

Huge as the deforestation problem is in Brazil, it doesn’t reflect the reality of Brazilian agribusiness: according to the MapBiomas land-use monitoring consortium, less than 1.5% of all farms in the country actually incur deforestation, and a recent Science magazine paper has shown that only 17% of soybeans and 20% of the beef produced in Brazil and sold to Europe are tainted with forest crime.

Separating the rotten apples from the rest of the barrel is doable, but it takes a nudge; the EU regulation may just provide it.

The text made available by the Commission is a start, but it demands improvement. As Brazilian civil society organizations, we must caution against the use of the FAO definition of forests for due diligence purposes.

Shall the EU adopt such a narrow criterion, an area of native vegetation in non-forest ecosystems equivalent to five times the French territory will be left unprotected in South America, into which conversion may leak, including Cerrado, the Brazilian savanna, which has seen a 17% increase on deforestation in the last three years.

It is futile to win a climate battle at the expense of biodiversity, water protection and other ecosystem goods and services.

It is also paramount to set a cut-off date well before December 2020; in Brazil, criminal deforestation has skyrocketed since 2019 under Bolsonaro, and a 2020 date would reward those who have invaded public land, including indigenous territories, under the blessing of the far-right President.

Tracing deforestation and conversion back to the individual farm, something that Brazil has been doing for more than 15 years within the framework of the Soy Moratorium, is likewise key to the success of any anti-deforestation legislation. Technology for traceability is widely available.

One thing a lot of people even in Brazil don’t understand about the Amazon is that political signals are often as determinant of deforestation dynamics as actual legislation.

When President Bolsonaro says he is going to “chop the heck off” environmental enforcement agencies, he’s giving the green light for land grabbers, illegal loggers, wildcat miners and land speculators to chop the heck off the rainforest.

Likewise, when a major commodities market says no to any and all deforestation, that also sends a message that crime won’t pay, empowers the majority of farmers that are refraining from clear-cutting and makes law enforcement easier.

When the far-right nightmare is over, hopefully in 2023, Brazil will need all the help it can amass to control deforestation and re-engage in the fight against the climate crisis. We could use a little help from our friends – and our clients.