Ana Barreira is the director of the International Institute for Law and the Environment (IIDMA).

The Climate Change and Energy Transition Bill was adopted by the Spanish Government on 19 May and submitted to the Parliament. At the UNFCCC 21 COP held in Paris, the former President of Spain committed to prepare such a bill, but it never happened.

Three bills have been drafted since the Socialist Party took power after a motion of no-confidence in May 2018. On 21 January 2020, the Spanish Government declared the climate emergency. Among the measures to fight the emergency it included the commitment to prepare and submit the Bill to the Parliament within its first 100 days in office but the COVID-19 pandemic delayed it.

The final Bill comes during testing times for Spain, after the COVID-19 pandemic has hit the world. As a response, the European Commission has drafted a Recovery Plan which in words of its Vice-President Frans Timmermans must be aligned with the European Green Deal (EGD). A key element of the EGD is the future “European Climate Law” proposed in the form of a Regulation.

At the same time, the Spanish Parliament has set a non-permanent Committee for the Economic and Social Recovery comprised of four working groups on: public health, economic recovery, social care and the EU. 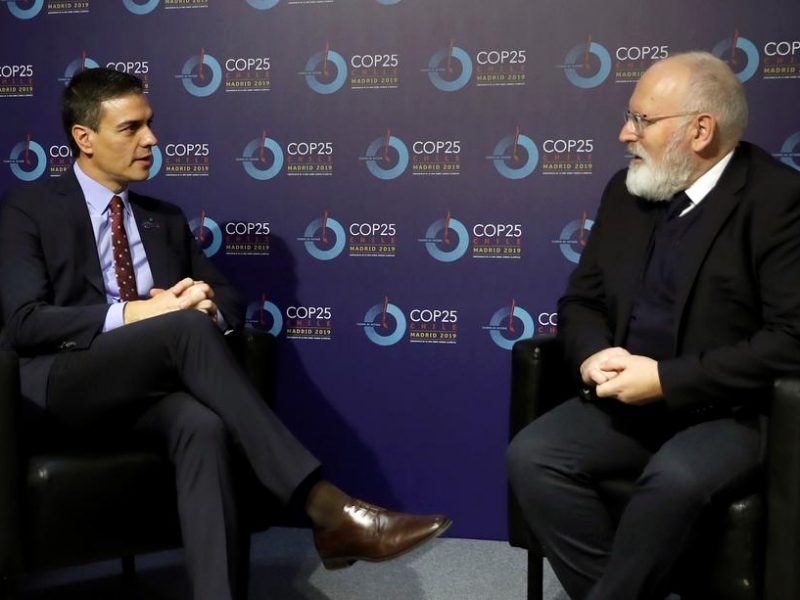 However, the EU’s 40% GHG reduction target is expected to be increased to a 50-55% as per the European Green Deal. This is poorly reflected in the Spanish bill, which foresees a 20% GHG cut from 1990 levels by 2030. Although the preamble of the bill explains that this 20% already counts the EU commitment, the first draft bill released in November 2018 already included a reduction target of 20%. Meanwhile, the Spanish NECP sent to the European Commission on March 2020 considers possible a reduction of 23% by 2030.

It has to be recalled that under the European plan to comply with the Kyoto Protocol, Spain was allowed to increase its emissions up to 15%, an amount which was well surpassed. If the EGD is going to be EU’s recovery strategy, the Spanish bill is not ambitious enough.

Finally, it contains a binding objective of climate neutrality by 2050 in line with the proposed EU Climate Law.

The Council of Ministers is given the power to increase those targets in the future. At the same time, the Bill includes the non-regression principle. Thus, once the Law is adopted the level of ambition and the elements it contains cannot be diminished either by the administration or by the courts.

The Bill commits the State to foster building renovation. Land planning and housing is a competence belonging to regions (autonomous communities) according to the Spanish Constitution. In addition, the Bill provides for a ban on new fossil fuel exploration and on fracking within all Spanish jurisdiction. From its entry into force, fiscal benefits to energy products from fossil fuels shall be allowed only if duly justified for social or economic reasons or for lack of alternatives. Fossil fuels subsidies shall be subject to an in-depth review. However, this is not a significant step if we remember that in the 2001 Gothenburg Sustainable Development Strategy, the EU committed to end fossil fuels subsidies by 2010.

In light of the CJEU, open cases against Spain on the alleged violation of the Air Quality Directive, the Bill includes the obligation to create low emissions zones in municipalities with more than 50,000 inhabitants by 2023. It also includes targets for installing electric vehicle charging points. By 2050, only zero emissions vehicles would be allowed on Spanish roads.

The Bill establishes the obligation to develop a national adaptation plan in line with the proposed EU Climate Law. In addition, many other plans and strategies shall have to be developed to implement the Spanish Law i.e.: a 2050 decarbonisation strategy for the electricity sector or an ecosystem conservation and restoration strategy, the latter in line with the recently proposed EU Biodiversity Strategy.

This Bill envisages the creation of a Climate Change and Energy Transition Committee to evaluate and make recommendations on energy and climate change policies.

Although this Committee mirrors the UK Climate Change Committee and other similar advisory bodies which have been established in countries as France and Sweden, the Spanish proposal is not strong enough.

The pandemic has illustrated how important it is to base political and policy decisions on science. In fact, the proposed EU Climate Law does not include such a body, which has to be considered as a key lesson to be learnt from the COVID-19 crisis.

The Spanish Bill contains many other elements to face the climate emergency. However, Spain is a country in which the Autonomous Communities hold many of the competences required to implement the future Law. For this reason, the Bill should have included an enhanced governance framework for cooperation and coordination.

As fighting climate change needs an enhanced international cooperation framework the very same happens at the domestic level where powers are not centralised.

Now, it is the time for the Parliament to reinforce the text to set the path for ensuring both a green recovery and a green future.