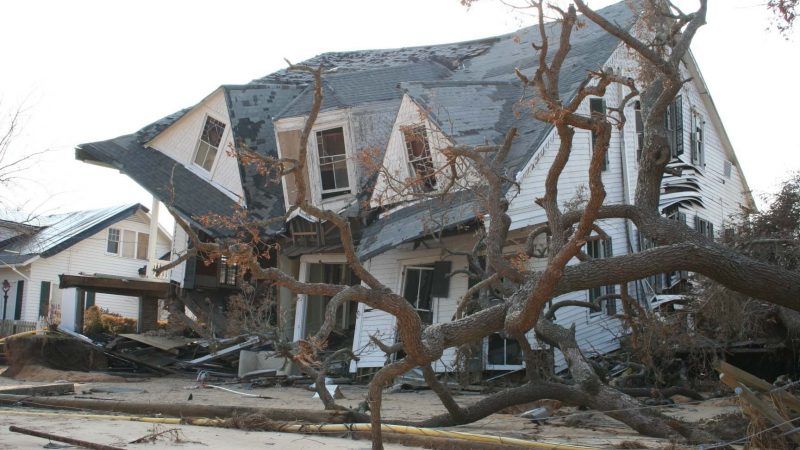 Damage wrought by freak weather events, caused by climate change, are one of the most visible impacts. [NOAA]

Dr Bert Metz has served as chief negotiator for the Netherlands and the European Union on the UN Framework Convention on Climate Change and the Kyoto Protocol and was Co-Chairman of the IPCC Climate Change Mitigation Working Group from 1997 to 2008. He is a fellow of the European Climate Foundation and a member of several scientific advisory boards.

Each passing month adds to the weight of evidence of the threat posed by climate change. Even now, with global average temperatures just 1 degree Celsius (°C) above pre-industrial levels, floods, droughts, wildfires and a range of extreme weather events are becoming considerably more destructive and deadly – in Europe as well as in more vulnerable parts of the world.

It is within that context that we should consider the leaked draft of the of the 1.5 °C report from the Intergovernmental Panel on Climate Change (IPCC). While remembering that it is still a draft and could change substantially between now and its release in October, its findings are encouraging, if sobering: warming can be held below 1.5°C, avoiding many serious environmental and social impacts we face even if we limit warming to 2°C. But to do so, we need to act decisively, and we need to act now.

The EU, in particular, needs to strengthen its climate targets to make them consistent with keeping warming below 1.5oC. In the climate talks in Paris in 2015, it lent its support to those vulnerable countries that argued that the existing 2°C ceiling would expose them to sea-level rise, extreme weather, and profound economic disruption. They succeeded in inserting in the final agreement a commitment to “keep warming to well below 2°C and pursue efforts to limit the temperature increase to 1.5°C.”

To the layperson, half a degree of warming may appear insignificant. But scientists have become increasingly concerned that the world is likely to see profound and possibly irreversible impacts at 2°C that can be avoided at 1.5°C.

For some ecosystems, such as the world’s coral reefs, the difference between 1.5 and 2 degrees is likely to be critical. For vulnerable communities in the developing world, every tiny increase in average temperatures makes disaster more likely, and adaptation more difficult.

Sea level rise of several metres in the longer term is much less likely in a 1.5°C than in a 2oC scenario, a difference that will be crucial for many small island and low lying states. Reductions in crop yields in Africa and Central America will be substantially lower, as will risks of water shortages and tropical heat waves.

But even rich parts of the world, including Europe, will not escape the additional pressures caused by higher levels of warming. Sustained periods of high temperatures – such as last summer’s deadly heat wave – will become much more frequent. Droughts will hit agricultural yields. Greater climate impacts on Europe’s borders will bring more desperate refugees seeking asylum.

In working towards a 1.5°C world, Europe has a moral obligation to help protect the world’s most vulnerable people, as it promised to do in Paris. And it also has selfish reasons to strive to avoid the worst impacts of climate change.

Meeting the 1.5°C ceiling will require global carbon dioxide (CO2) emissions, which are still rising, to fall to net zero by 2050. For all greenhouse gases, including methane and nitrous oxide, that point needs to be reached by 2060-2070. In addition, it will be necessary to remove substantial amounts of CO2 from the atmosphere, through afforestation, agricultural soil carbon enhancement and other techniques.

The first step for the EU is to acknowledge that its efforts to date have not been enough. Its long-term climate goal, set in 2007, is to reduce its greenhouse gas emissions to between 80% and 95% below 1990 levels by 2050. However, the actions it has taken thus far will only get Europe to the lower end of that range.

The EU and its member states should, therefore, plan for an emissions reduction trajectory that results in net-zero emissions of all greenhouse gases by 2050, as adopted by the European Parliament in its position on the Governance Regulation. Interim targets should then be adjusted accordingly, giving developing countries a little breathing room for their emission reductions.

All that is needed to enable their widespread uptake is the political will to provide the necessary regulatory support and, in some cases, relatively small and declining quantities of financial assistance.

Climate leadership promises a range of benefits over and above controlling global temperature rises. Reducing greenhouse gas emissions cuts local pollution, improving health. It will spur technological innovation, offering a source of economic growth, competitive advantage and employment. It promises more secure and cost-effective energy systems. All these co-benefits are greater if decisive action is taken to move on to a 1.5°C trajectory.

Conversely, the economic costs of failing to act on climate change are enormous. According to the UN Development Program, the global economy will be 10% larger by 2050 if we are able to hold warming to 1.5°C, compared with a world which warmed 2.5°C. Such economic growth, including in Europe, would dwarf the costs involved in moving rapidly on to a zero-emissions pathway.

Without doubt, the effort required to hold the average global temperature increase to 1.5°C is significant. It is also clear that there is little time left to act, after which the accumulated greenhouse gases in the atmosphere will condemn us to more substantial temperature rises for centuries to come, regardless of subsequent reductions.

The IPCC report should be a wake-up call and encourage the EU to introduce policies and commitments that match its rhetoric in the UN negotiations and protect its citizens.