By Adélaïde Charlier and Deborah Osei-Mensah 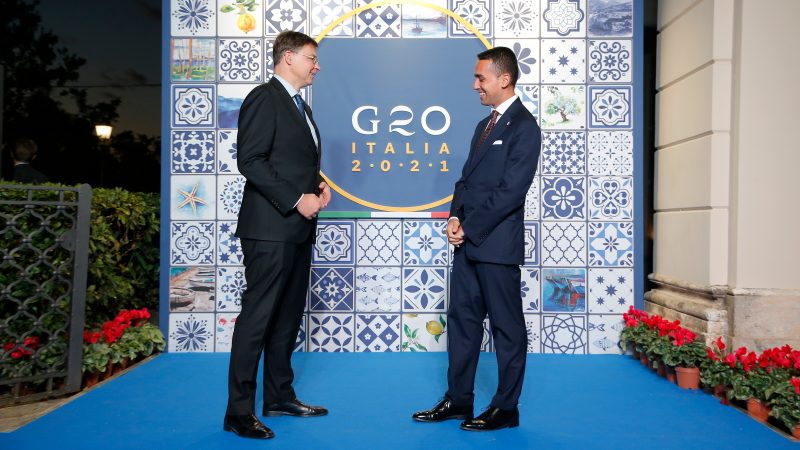 You can put all the sustainability principles you like in trade deals but without means for control, monitoring, enforcement or legal consequences for a failure to comply, they aren’t worth a thing, writes Adélaïde Charlier and Deborah Osei-Mensah.

Adélaïde Charlier is co-founder of Belgium’s Youth for Climate movement. Deborah Osei-Mensah is a cocoa producer and fair-trade youth ambassador from Ghana.

Ahead of the COP 26 climate summit, the EU has been enthusiastically promoting its credentials as the world’s climate leader. It points to its plan to cut emissions by 55% by the end of the decade and its new policy of aligning trade – or more specifically, free trade agreements (FTAs) – with environmental aims.

On the first of these, the EU’s so-called Fit for 55 plan is a start and may help push other major emitters to act, but it is insufficient if it is serious about doing its fair share to avert the worst of climate breakdown.

The issue of a renewed trade policy – a key element in making the bloc’s Green Deal a reality – is the subject of a public consultation, which runs until the end of the month.

Taken at face value there is much to shout about: international trade covers a huge amount of exploitative, destructive and carbon-intensive economic activities. Ursula von der Leyen summed it up nicely in her manifesto for the job of Commission president, declaring “trade is not an end in itself”. In her more recent State of the Union speech, she even called for zero forced labour supply chains, stating that “business and global trade can never be done at the expense of people’s dignity and freedom”.

So far, so good? A policy worthy of a climate and social rights leader? Well, actually, no. You don’t have to look too far to see that in the words of Greta, this is all so much “blah blah blah”, a triumph of rhetoric over substance, a failure to walk the talk.

Trade remains the emptiest of all the EU’s sustainability policies. And that matters because action and policy coherence are needed now – we can’t have policies that will only be aligned at some distant future date. It undermines the vital trust on which climate negotiation and action is based, and further erodes faith in political leadership, most notably for young citizens. Not only that, failure to put the policy into action threatens to lock in high carbon trade at a time when the EU is discussing deals with countries like Indonesia, where so much is at stake on both sides.

The EU’s Brexit deal with the UK was far from perfect. Still, it was widely cited as breaking new ground by making a failure to abide by the Paris Agreement a sanctionable – or punishable – provision. Since then, however, the EU has been on the backslide. Earlier this year, there was a disgraceful plan to push through ratification of the deeply flawed and outdated agreement with the Mercosur countries.  Without a fundamental renegotiation to align with current assessment and best practice, the Amazon, its people and wildlife will be further endangered. At about the same time, the EU reportedly rejected demands from New Zealand to have sanctionable green provisions in the FTA the two are currently negotiating.

This begs the question: if not now, when, and with whom? Because New Zealand has been walking the talk, as shown by its trailblazing ACCTS trade deal with Costa Rica, Fiji, Iceland, Norway and Switzerland.

In today’s world, talk is cheap, trust is in short supply, and time is running out. You can put all the fine principles you like in deals, but without means for control, monitoring, enforcement or legal consequences for a failure to comply, they aren’t worth a thing. These are a prerequisite to climate justice and a just transition.

Peer through the smokescreen of rhetoric, and you will see that the EU hasn’t changed its harmful approach to trade at all. Its focus remains on seeking ever greater market share for its products and services while offering crumbs in return. If it were serious about making trade sustainable, environmental principles and social conventions would be in the DNA that runs through trade agreements. But these are largely absent from the main text of agreements – instead being confined to non-binding and vague “trade and sustainable development chapters”, which are bolted on as an afterthought.

Finally, it is hard to believe, but despite sometimes taking place over decades and with so much at stake for all citizens, the EU’s trade talks are effectively held in secret. There’s no real mechanism to involve stakeholders and civil society in checking progress and understanding whether or not the green rhetoric is being applied.

Unless that rapidly changes, we’ll all be none-the-wiser until it is too late and we are presented with another greenwashed done deal. This is how the EU’s leaders will trade away our future.