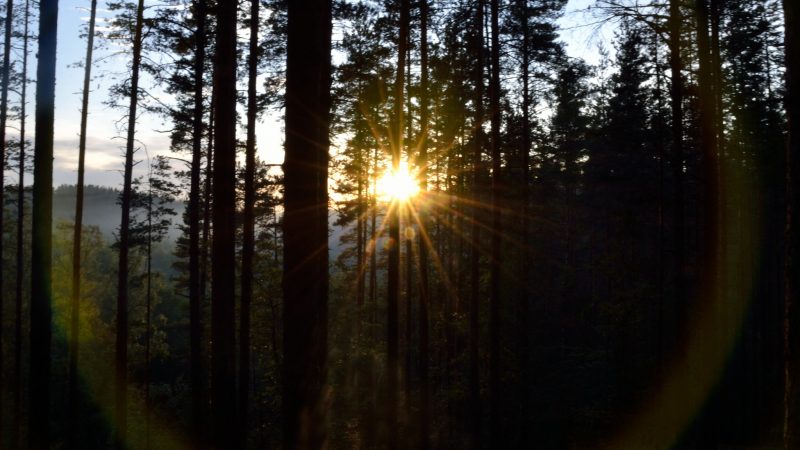 Natural carbon sinks such as forests, while a great benefit to biodiversity and climate resilience, are particularly sensitive to ‘reversals’ through extreme weather events which are likely to increase in frequency and intensity, writes Mark Preston. [nicole.zuanon / Flickr]

Mark Preston is a policy adviser at Bellona Europa, the EU branch of an international environmental NGO based in Oslo, Norway.

Last month, the European Commission announced it will raise the EU 2030 target to at least -55%, also introducing the idea of a Net target (instead of an absolute one) for 2030 for the first time in the public debate.

The Impact Assessment accompanying the Commission’s proposal only assessed net targets, revealing that this idea has been in the making for some time, despite this not being explicit in the public consultations. We have now been faced with a rude awakening on the issue of negative emissions, long overlooked by climate policy.

The conversation on Carbon Dioxide Removal (CDR) is severely overdue, but this not only due to the new targets. In late September, the Norwegian government announced a huge plan for geological CO2 storage, a vital part of the chain for many carbon removal processes.

The topic is developing rapidly, and some important guidelines must be set when it comes to how carbon removal is governed.

The 2030 target now combines both emission cuts and carbon removals, despite no legal framework to regulate or define the latter. The result: an obfuscation of how the Commission really plans to reduce the EU’s emissions.

This is the key issue, since climate targets should serve to provide certainty and send a strong signal to market actors of the importance of reducing emissions.

Bellona has long argued that removals will play a key role in meeting the ambitious goals of the Paris Agreement, while bearing in mind that the first-order priority should always be to reduce emissions as quickly as possible.

In this sense, we are glad that this conversation is finally happening – yet, we specifically cautioned against the inclusion of negative emissions in the target because this risks diluting both climate mitigation efforts and the benefits of removing carbon from the atmosphere.

To keep fact from fiction it will be important to:

Storage of carbon must be well defined and accounted for

Carbon dioxide removal is not that straightforward, especially in an increasingly fragile climate. It is not simply about removing CO2 from the atmosphere, but also ensuring the CO2 stays away from the atmosphere for a climatically relevant amount of time.

Natural carbon sinks, while a great benefit to biodiversity and climate resilience, are particularly sensitive to ‘reversals’ through extreme weather events; likely to increase in frequency and intensity.

Relying on carbon sinks to pull the EU towards climate neutrality, without putting in the necessary legwork to reduce GHG emissions in the first place, is a dangerous game to play.

Removals are likely to be limited

There are inherent limitations to the deployment of carbon removal processes, such as natural impacts, technological barriers, economics, social acceptance and equity, to name a few. These are hardly ever assessed in climate mitigation models.

Most estimates for carbon removal deployment rest their hopes on optimal conditions but this can never be the case. For instance, there is only so much land that we can use to plant trees or renewable electricity to run Direct Air Capture units. Combine this with the potential for reversals and suddenly the deployment potential could be much smaller.

In simpler terms, the models might tell us we need to remove 20 billion tonnes of CO2. If this is assumed in our net-zero target for 2050, but we only manage to remove 15 billion tonnes. That means we will have missed our target by 5 billion tonnes. This is why emission cuts must be independent of efforts to increase carbon removals.

At least –55% reductions are not guaranteed

The emissions target is now unclear because terminology and accounting rules have not yet been established. Where previously the target was a fixed and explicit reduction in emissions, this extra ‘flexibility’ to include removals could change the emissions reductions target by several percentage points.

Not only can sinks be variable and storage reversible but depending on how these are accounted and defined, the emission reduction target will change (and may bear little connection to the actual climate impact).

The target to actually reduce emissions by 2030 is no longer a fixed goal, but an estimation. Adjusting the cap of the EU Emission Trading System will now become guesswork.

Inclusion of sinks in the target will inevitably lead to trading of removals in a way that could well lead us to a zero-sum game on the climate front (one will remove so others can emit).

A robust definition of carbon removal and a reliable certification scheme are an absolute necessity before trading should even be considered. Failure to do so could have bizarre consequences.

We may end up with car manufacturers selling petrol cars and paying farmers to continue their business-as-usual, without anyone actually removing carbon or reducing emissions.

Unfortunately, the Commission has just made one step in that direction. While emissions reductions may look good on paper, it may be wise to keep an eye on the thermometer to track the real figures.