The Brief – Planning to fail 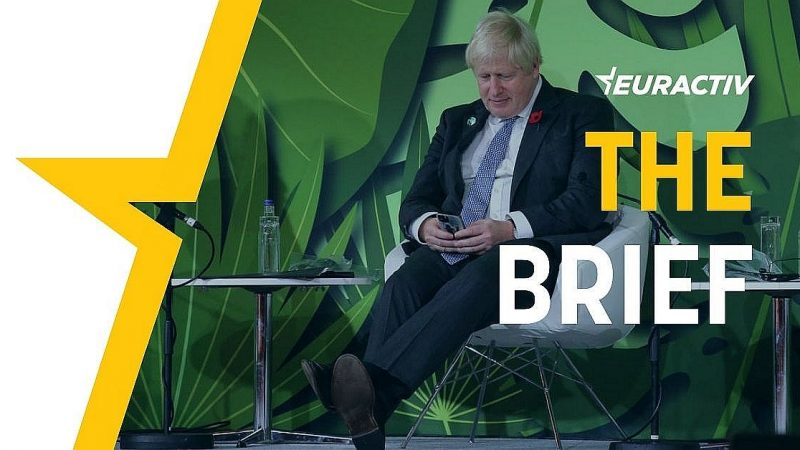 Failure to plan means you are planning to fail, as the old saying goes. By all accounts, the UK’s shambolic hosting of the COP26 summit has been a masterclass in failing to plan.

That’s entirely in keeping with the style of Prime Minister Boris Johnson, who has turned winging–it into an art form. But that style simply doesn’t work for international summits that are months, even years, in the making.

Just as serious as the no shows by the likes of Russia’s Vladimir Putin and China’s Xi Jinping is the fact that leaders are still light–years away from seriously addressing the real cost of the energy transition needed to reach ‘net zero’.

In the days leading up to COP26, many EU states promised to increase their contributions towards the $100 billion annual fund for developing countries to make their own green transition. However, the target will not be met until 2023 at the earliest, three years later than promised.

That’s all well and good – the EU and its member states are set to be among the first to be carbon neutral if they hit their 2050 target – but it is a fantasy to believe that a billion here or there will make much difference. By most accounts, the $100 billion target is far too low anyway.

The UN Environment Programme, meanwhile, puts the costs of financing the net-zero transition in emerging nations worldwide at around $140–300 billion by 2030, rising to $280–500 billion by 2050.

The scene at next year’s COP27 in Egypt will probably focus away from the commitments of wealthy big emitters towards how developing countries make their own energy transitions.

Nigeria’s Vice President Yemi Osinbajo, whose country is heavily reliant on oil production and exports, estimated that $1.6 trillion investment is needed for renewable energy in Africa per year until 2030 to meet the continent’s needs for transition.

It’s not entirely clear where these figures come from. But developing states in Africa and elsewhere, particularly those who are already low carbon emitters, are in a strong position to condition their net-zero commitments on receiving the cash needed to build large-scale renewable energy infrastructure.

These are daunting sums of money, with a narrowing window in which to act. The question is, where will the leadership towards meeting these targets come from?

China has absented itself from the discussion and in the United States, the lack of ambition is underscored by President Joe Biden’s delight in obtaining $500 million to finance renewable energy infrastructure in his Building Back Better bill.

The obvious answer is that the EU is best placed to do the diplomatic heavy lifting on net-zero targets and the awesome costs of financing the transition.

In the meantime, Greenpeace has poignantly summed up the “efforts” so far: 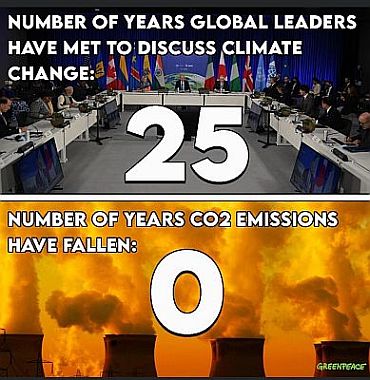 Only a quarter of senior positions in economics at universities and business schools are held by women, according to a recent study. Christine Lagarde, President of the European Central Bank (ECB), pushes for more women in economics, saying “diversity is key to creating knowledge”.

Delhi and Brussels have reaffirmed their commitment to expand collaboration on climate change, with the possible launch of a “green hydrogen alliance” on the agenda of bilateral talks next year.

The French Senate has passed a law that aims to reduce the environmental footprint of digital technology, which includes an obligation for French telecoms operators to disclose to the public what they are doing to this end. EURACTIV France reports.

In order to adapt labour markets to the requirements of the future, the European Union wants to promote lifelong learning among the continent’s workforce. However, the share of adults who take advantage of learning opportunities varies widely across Europe.

Because of labour shortages caused by Brexit, British meat producers have resorted to exporting animal carcasses to the EU for butchering before re-importing the meat, but the UK government has insisted this will be resolved via its domestic workforce.

A majority of residents in rural regions in Germany are satisfied with their quality of life. The situation is less positive when it comes to jobs, digitalisation and public transport links, a study commissioned by the agriculture ministry published on Monday (1 November) found. EURACTIV Germany reports.