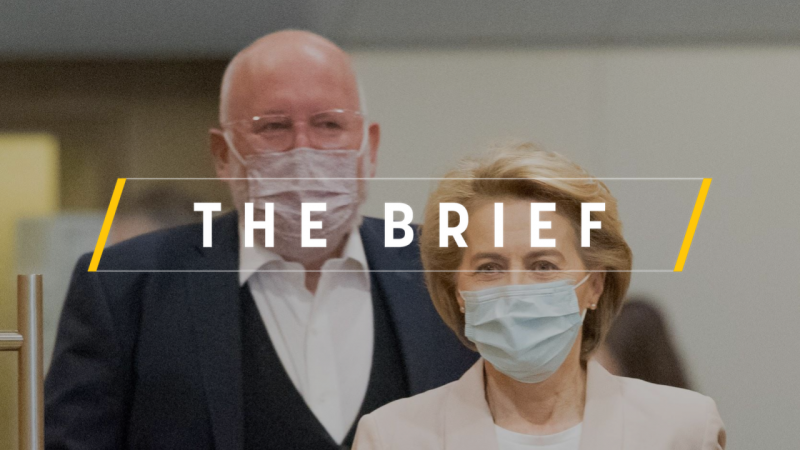 Ratcheting up the existing 40% emissions cuts target has been on the EU agenda for a long time. The current goal is widely accepted as being outdated and not in keeping with the bloc’s pledge to go climate neutral by 2050.

That is why von der Leyen’s Commission announced a review into the possibility of a new benchmark, between 50 and 55%, as part of its Green Deal. Now the number-crunching has wrapped up, it reportedly looks like 55% will win the day.

Extra provisos are sure to accompany that proposal but 55% is ultimately not a surprising outcome, given that EU climate boss Frans Timmermans has repeatedly suggested the cost-to-benefit review would make that conclusion.

It is also the bare minimum that the European Parliament will accept. Many MEPs want a target closer to 65% but given that the conservative-leaning energy committee this week backed 55%, it looks likely the full plenary will support that compromise.

According to climate experts, the EU is already on track to cut emissions by more than half – compared to 1990 levels – when you factor in things like coal phase-outs and the predicted increase in the price per tonne of carbon, which will force out more dirty power plants.

When one of the main pillars of the Green Deal – this Commission’s flagship policy, remember – is to make Europe a shining beacon that convinces the rest of the world to go green, quickly, business-as-usual will ruin the global sales pitch.

Once von der Leyen lifts the lid on the 2030 increase next week, it will surely be tempting for the Commission to sit back, relax and consider the job done and dusted. That could not be further from the truth.

Emissions cuts need a bedrock of policies to underpin them. Greenhouse gas output can increase after all – take the automotive sector as a prime example – if regulators do not keep proper tabs on emissions or design robust laws in the first place.

So the Commission’s work has only just begun. The various polluting segments of the transport sector have to be reined in, the mess that is agriculture has to be cleaned up and a difficult conversation about fossil fuel subsidies has to be had.

The EU executive will also have to weigh in on whether the mid-century emissions target is a collective average benchmark or if each member state will have to scrub their pollution levels down to a net-zero level.

MEPs think the latter but the Commission and Council have both been vague and elusive about the issue. A lot of climate accountancy linked to carbon sinks, budgets and emissions trading might first have to be run through the abacus a few times.

Climate neutrality by 2050 will not happen by itself. Indeed, it is maybe the EU’s most complex challenge to date. A clear path up to 2030 and then beyond will give the bloc a fighting chance of achieving it.

Von der Leyen confirmed MEP Mairead McGuinness as her pick to replace Phil Hogan as Irish Commissioner and Valdis Dombrovskis as the bloc’s replacement trade boss. Both now require Parliament’s approval before they can formally start their new roles.

The Strasbourg plenary session will not happen next week – as expected – and MEPs will instead gather either physically or virtually in Brussels instead. An official announcement was still pending before The Brief was published.

A senior UK minister said that the British government will break international law related to the Northern Ireland protocol “in a very specific and limited way”, unless Brussels and London manage to broker trade deal by the end of 2020.

MEPs still need to vote on the long-term budget pact but they have a wishlist first that includes €110bn in new cash and a deal on ‘own resources’ revenues. The Commission wants swift deployment of COVID funding for farmers, as do lawmakers for regional funding.

EU competition boss Margrethe Vestager says Europe’s online marketplaces should not be controlled by just a handful of gatekeepers, while French finance minister Bruno Le Maire has hit out at Apple’s market dominance.

Le Maire and his fellow finance chiefs will discuss fiscal dumping at a Berlin meeting this weekend, while Council boss Charles Michel confirmed that the member states are interested in a carbon tax on unsustainable imports.

Be sure to check out the return of the Transport Brief and Vlog, for all your post-summer break updates, including the German football team landing in hot water after taking a rather short flight instead of the train.