The Brief, powered by EPRA — Guess who’s (not) coming to COP dinner 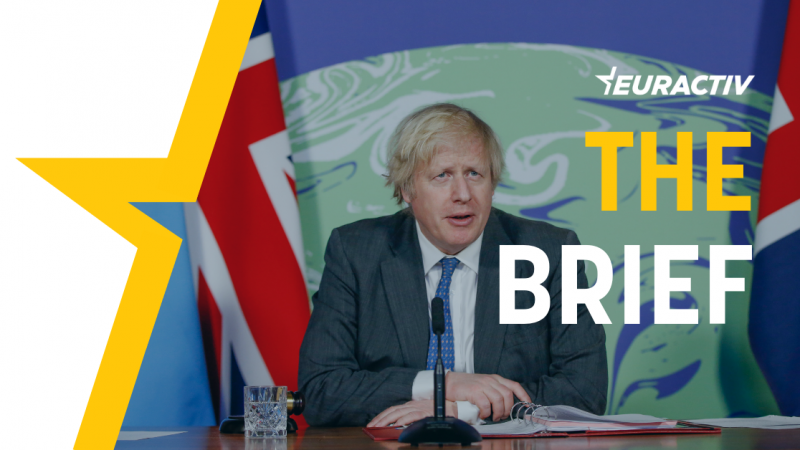 “I’ve been hearing all about COP. Still don’t know who is coming. No idea. It’s really irritating when they talk, but they don’t do,” the monarch said in a private conversation, overheard by the press.

COP26 will start on 31 October, with the Queen scheduled to attend. But on Wednesday (20 October), she decided to rest for the next few days on advice from doctors and cancelled a planned visit to Northern Ireland.

Also on Wednesday, Russia said that President Vladimir Putin would not fly to Glasgow. Putin’s spokesman said he would take part remotely, but the no-show by the leader of the world’s fourth-biggest emitter of greenhouse gases is a significant setback.

Putin faces a challenging situation with Coronavirus-related deaths across Russia, which yesterday hit yet another daily record at 1,028 fatalities, and 34,073 new infections. But relations between London and Moscow are so bad that a snub to Boris Johnson plays well for Putin.

Xi Jinping, the president of China, the world’s biggest emitter, is also unlikely to attend. Xi hasn’t travelled outside China for the last two years. In September, he declined an invitation to attend the G20 meeting in Rome on 30 October, one day before COP26 begins, citing COVID concerns.

China was recently hit by an energy crisis that left millions without electric power, seen as a result of Xi’s new policies to meet China’s climate targets.

Experts generally agree that global momentum on tackling climate change is not possible without the United States and China on board, which together account for more than half of the EU’s total emissions. However, tensions between Washington and Beijing have grown since President Joe Biden took office.

India’s Prime Minister Narendra Modi, meanwhile, is also yet to decide whether he will attend. India is the world’s third CO2 emitter.

As for the Vatican, unfortunately, Pope Francis is not expected to be amongst guests. Iran’s President Ebraham Raisi will also not attend COP26 after reports in the British press that local politicians were calling for a criminal investigation if he set foot in Scotland.

Brazilian President Jair Bolsonaro and Vice President Hamilton Mourao, his point man for the environment, are not going either. Neither is Mexican President Andres Manuel Lopez Obrador.

Among those who have confirmed participation are President Biden, the EU and its member countries, and the leaders of Israel, Australia, Canada, and Turkey.

The COP26 is taking place in completely different surroundings compared to COP21 in Paris in 2015, which culminated with the Paris Agreement.

In 2015, there was no COVID crisis, no energy crisis, and no major tensions between China and the US. To tackle climate change, the world needs a minimum of togetherness, which is now lacking.

Of course, Boris Johnson will put on a brave face. But the Queen said it all: expectations are not high.

For ongoing coverage of the European Council summit in Brussels, check out EURACTIV’s liveblog. Hot topics on the two-day agenda include energy, migration, digital, and of course… Poland.

The French government has announced a €650 million investment to accelerate its national digital health strategy as part of the Health Innovation 2030 plan. “Digital medical devices are not gadgets or just a vaguely futuristic trend. They are the future of our healthcare system and the drivers of a triple ambition: anticipation, prevention, treatment,” Health and Solidarity minister Olivier Véran said.

And the European Parliament has voted by a vast majority to adopt a report on protecting workers from asbestos in what has been dubbed a “historic” move. The report proposes developing a comprehensive European strategy for the removal of all asbestos (ESRAA) in the EU using the synergies of several policy areas and accessible asbestos registries.

In India, the national COVID-19 vaccination effort has achieved a historic milestone of administering one billion vaccine doses, mostly Indian-made. Three-quarters of adults in the country of 1.3 billion people have had one shot, and around 30% are fully vaccinated, the government said.

In a defensive move, Turkish President Recep Tayyip Erdogan criticised Europe’s colonial past as he launched a new pitch for his country to rival Europe in the race to increase trade and investment ties with Africa. “The fate of humanity cannot and should not be left to the mercy of a handful of countries that were the victors of the Second World War,” Erdogan told Angolan lawmakers on Monday.

The EU’s push on organic farming could have ripple effects across Africa, but only if African farmers have equal access to the European Market as well as the skills and resources to capitalise on this, stakeholders emphasise. Currently, only 0.2% of agricultural land in Africa is cultivated in organic farming and the nation’s participation in organic exports is still marginal.

EU co-legislators appear to be approaching common ground on several key points of the e-Evidence proposal, which aims to facilitate law enforcement access to electronic evidence from another EU country. The new directive would allow judicial authorities to issue a European Production Order, requiring the service provider or its legal representative located in another EU country to access the evidence for an ongoing investigation.

French cloud industry players say the nation’s “trusted cloud” strategy sends “contradictory messages” and leaves little room for competition in the race for digital sovereignty already dominated by the likes of Amazon, Google and Microsoft. “It’s becoming a weapon of destruction when it could be a weapon of conquest for the market,” the head of Clever Cloud said.

The Parliament has passed by a large majority a resolution to support the EU’s media sector in the “Digital Decade,” including better protecting media freedom and safeguarding independence. The resolution sets out provisions to support the media sector following the hit it has taken during the COVID-19 pandemic and bolster funding in an increasingly digitalised setting.